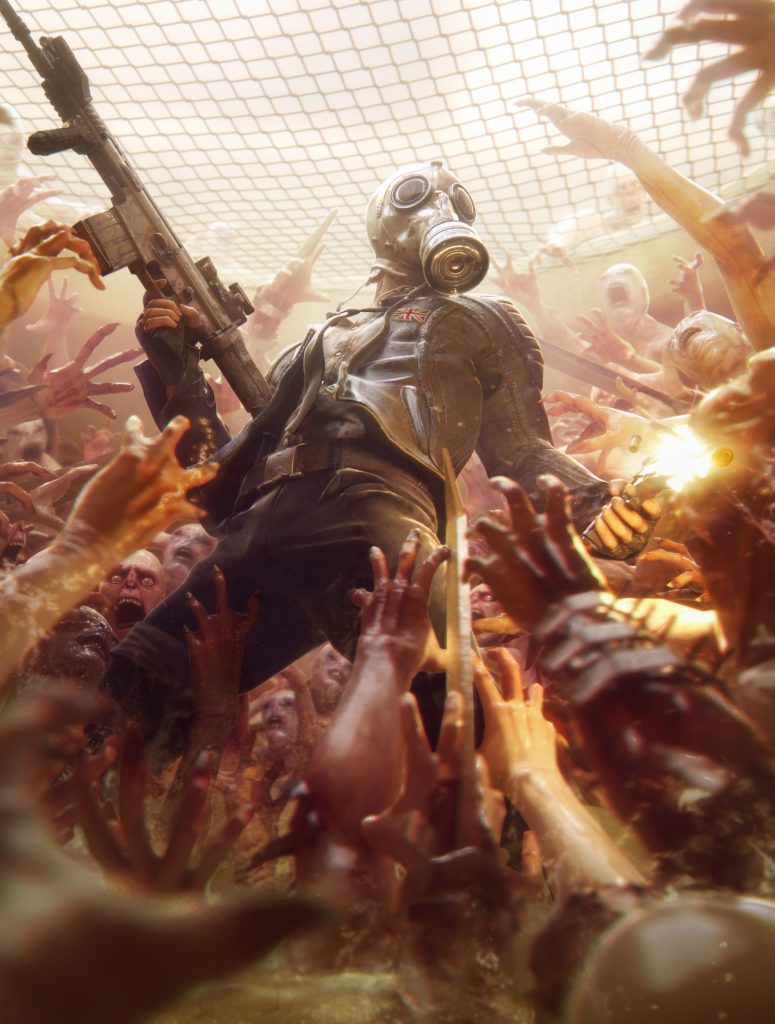 A bit of a different beast from the titles I normally review, I was given the chance to check out Killing Floor 2. Will slaughtering the hordes of Zeds be as entertaining as it was in the original?

The plot of Killing Floor 2 takes place a month after the original. For those unaware, in the original, a biotechnology company known as Horzine Biotech has been contracted to conduct military experiments involving mass cloning and genetic manipulation. Unfortunately, during the experimentation, something goes horribly wrong, and human subjects start to exhibit grotesque mutations and disfigurement while becoming increasingly hostile. Eventually, they manage to overrun the internal security forces and break out to the surface, disrupting a peace protest and consuming the civilians despite the best efforts of the local police force. Though the police continue to attempt to fight back, their efforts are in vain. As a countermeasure, the British government organizes ragtag teams of surviving British Army soldiers and Special Branch police officers to fight back.

Now, one month after the events, the outbreak has managed to spread beyond the borders of Europe, effectively causing communication systems to fail and governments to collapse.

As you play Killing Floor 2, you will most likely do so in multiplayer Survival mode, which simply sends increasingly challenging waves of enemies at your group of six or fewer players to see how long you can survive. Between these waves, you will be able to pick up armor, ammo, and other weapons via in-match currency.

There are cautious moments in which players will need to group up, heal each other, ant attempt to take down arachnid creatures and cloaked acrobats bursting through every doorway around. There are also moments of pure chaos as hulking creatures such as the Fleshpound scatters your team or a demon grabs you from behind unexpectedly.

Although the basic strategy of “Stay grouped, conserve ammo, and know when to run” is quite uncomplicated, it is still easy, on the harder levels (and even the easier ones, if somebody is careless enough) to fail out on wave four of ten. This can occur due to your medic being taken out, backing into an unseen horde and cornered while reloading, or being taken down by a mutant wielding an arm cannon known as a Husk. As you can likely tell, Killing Floor 2 is quite a repetitive game as you play the same challenge time and again while magnetic enemies and some predictable special creatures charge forward to overwhelm you. That said, players will likely find enough fun in handling the various weapons in the game and the explosive gore to continue.

In terms of weapons, you have quite a few to choose from in both melee and ranged categories. In terms of ranged, you have weapons such as the HMTech-201 SMG, SCAR-H assault rifle, AR-15, rail gun, and even a microwave gun. Melee features a katana amongst others.  The variety here is appreciated, although some, such as the SCAR-H, can feel a bit gratuitous when other weapons in the same class are perfectly functional.

In terms of melee, the system is not complex, but it also doesn’t feel like something just slapped together. When wielding a melee weapon, you can swipe up, left, down, or right, as well as perform both light and heavy attacks. You can also time your blocks to knock back specimens. As you play matches, your class, or “perk,” as the game calls it, levels up, and you get to choose from some bonuses. A level 5 medic, for example, can choose between a health or damage resistance increase. Of course, you also have the standard basic stat bonuses, such extra damage for class-specific weapons. These bonuses can make it quite tempting to just grind away in Normal, which I would discourage if you like any sort of  challenge, as it is extremely easy. It can also discourage swapping out characters if you get too attached to a class, as you will feel like you’re holding your team back if you go into battle as a new class rather than a level 15 or so that you normally utilize.

Hard and the higher difficulties offer up faster, smarter, and grant them more health. The first two are certainly great, requiring the player to adjust their tactics and require more precision from the players, however, the third can, for some, make the game feel less enjoyable as they absorb more and more hits. If you are more of a solo player, you can also take on the hordes alone to see just how far you can make it on the exact same maps.

Killing Floor 2 is pretty good in visual and audio quality, and the gore system means that blood splatter will continue to build up as more and more waves come through, eventually painting entire areas and room red. In terms of audio, the squishing and liquid explosions are especially nice.

Killing Floor 2, though it can become repetitive, is still gore-soaked fun that first-person shooter fans should enjoy for quite a while. If you like a challenge, you may want to jump straight into the harder difficulties, although the temptation to grind away in normal may be too tempting for some. Of course, since the core gameplay feels so solid, the repetitive issue is a minor one.