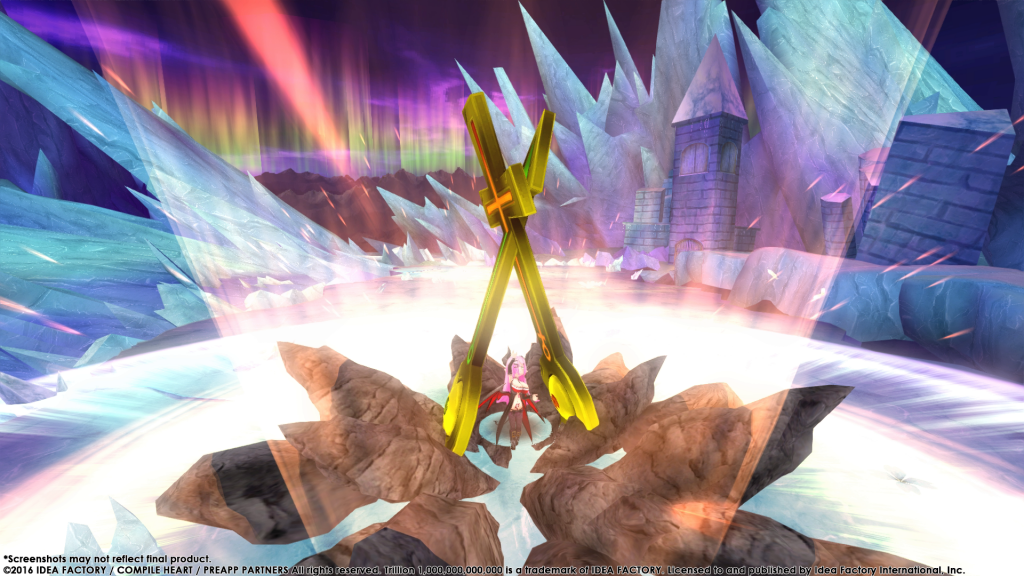 Trillion: God of Destruction arrived on Steam in October, asking PC players if they can take down an enormous boss with a trillion hit points. It has already received its answer from PlayStation Vita gamers, as well as several PC gamers by now, but what do you believe, if you haven’t yet taken on the challenge?

Trillion: God of Destruction’s story follows Zeabolos, the grandson of Satan, and the other Overlords of the Underworld. Trillion, the powerful God of Destruction, has returned and is set to devour the Underworld. Zeabolos, the Supreme Overlord, sends his men out to fight Trillion, however, none can even get close, thanks to the powerful and deadly miasma that Trillion emits.

After losing so many of his hardened soldiers, Zeabolos dashes onto the battlefield himself, determined to slay the vile God. Unfortunately, he fails, and his brother, Astaroth, is also defeated, but not before sealing Trillion’s arm. 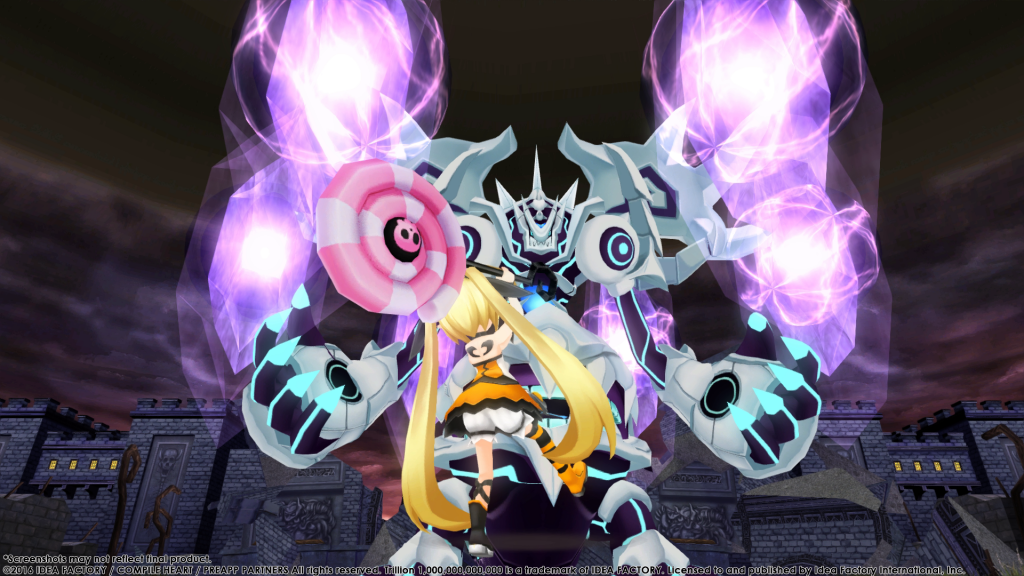 On the brink of death, Zeabolos is rescued by an enigmatic woman known as Faust. She promises that, if Zeabolos promises her his soul, she will help him defeat Trillion. He agrees but is sidelined as he discovers that his body has been shredded.

Due to the condition of his body, he must now pick from the other six Overlords and train them. If his chosen Overlord is successful, she will become the new Supreme Overlord.

The story doesn’t sound like anything too special, but the characters, despite being one-dimensional at first (they are essentially embodiments of the seven deadly sins, after all), can easily grow on you. The story also has some interesting twists and is, after everything is done, quite solid.

The gameplay in Trillion: God of Destruction can basically be broken up into two parts. The first, and more prevalent, part plays like a visual novel. After each battle against the powerful Trillion, he will rest, giving you a few cycles of 7 days each to train the Overlord you have chosen.

Training your overlord takes a single day and grants her experience in a variety of areas. You can utilize the experience in order to level up her weapons, skills, and stats, and thus, it can be tempting to just grind in the training regimens as you build your Overlord’s strength, but this can be quite a fatal mistake. 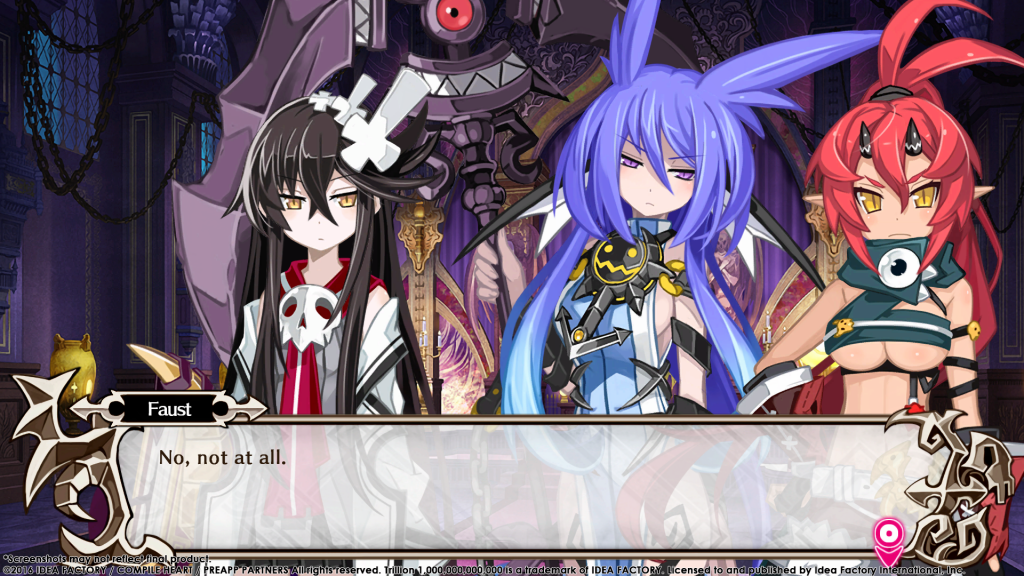 One reason for this possibly being a mistake is that, as you train, the Overlord’s fatigue increases, thus increasing the chance of injury during training. If injured, the Overlord will be completely unable to train or even enter the Valley of Swords for three full days, which thus costs you quite a bit more time than simply resting every so often.

On the note of the Valley of Swords, you can enter this mini dungeon by gaining five medals through training. Once entered, you have the chance to gain more experience and items, but you will need to keep an eye on your character’s health and the clock. If either hits zero, you will forfeit anything you have obtained.

In addition, you can give your chosen Overlord gifts and spend time with her, increasing her affection. Affection is actually quite important, as it is the affection bar that is utilized in order to use skills or absorb damage before your HP or MP bar is depleted. While this may make it soundAs you train, you can gain medals. Once you obtain five, you can adventure in the previously mentioned Valley of Swords, which is a mini dungeon that allows you the chance to gain more experience and items. You need to keep an eye on both your character’s health and the clock, however, as if either hits zero, you will forfeit anything and everything that you obtained. 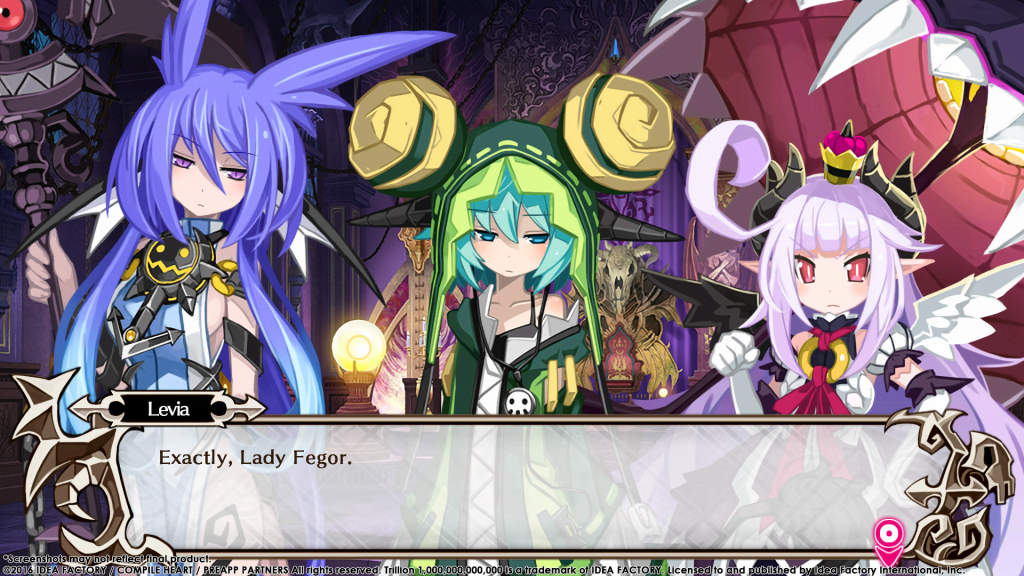 You can also spend time with your chosen Overlord and give her gifts. This increases the affection, which is extremely important as the affection bar is used to utilize skills or absorb damage before you HP or MP bar is depleted. This makes it sound like you may as well use your highest costing skills to dish out damage to Trillion as fast as possible, but you should always keep in mind that if your affection reaches zero, your Overlord will be unable to retreat from the fight. Retreating allows you to train your Overlord more as Trillion advances and consumes more of the Underworld. There is a limit to how often your Overlord can retreat, however.

As each cycle, prior to the one that will send you into battle against Trillion, ends, you will face a giant dummy known as Mokujin. Mokujin serves as a much weaker mock Trillion, helping you to prepare for the showdown and show off the fruits of your training. It is quite satisfying to defeat Mokujin, especially if you can do so without getting hit, so just imagine how good it feels to finally take out Trillion.

Battles take place on a grid, allowing you to move and attack in eight different directions. The game utilizes a dual-turn system, meaning that the enemies will move at the same time as you do.

You will have a variety of enemy types to encounter as you battle, and though some can be taken down with a single strike to the face, there are also those with special abilities. For example, some cannot be damaged from the front at all. If you defeat an enemy, you gain an extra turn, thus allowing you to attempt to chain kills, or, if you prefer, take down an enemy and proceed to retreat quickly. 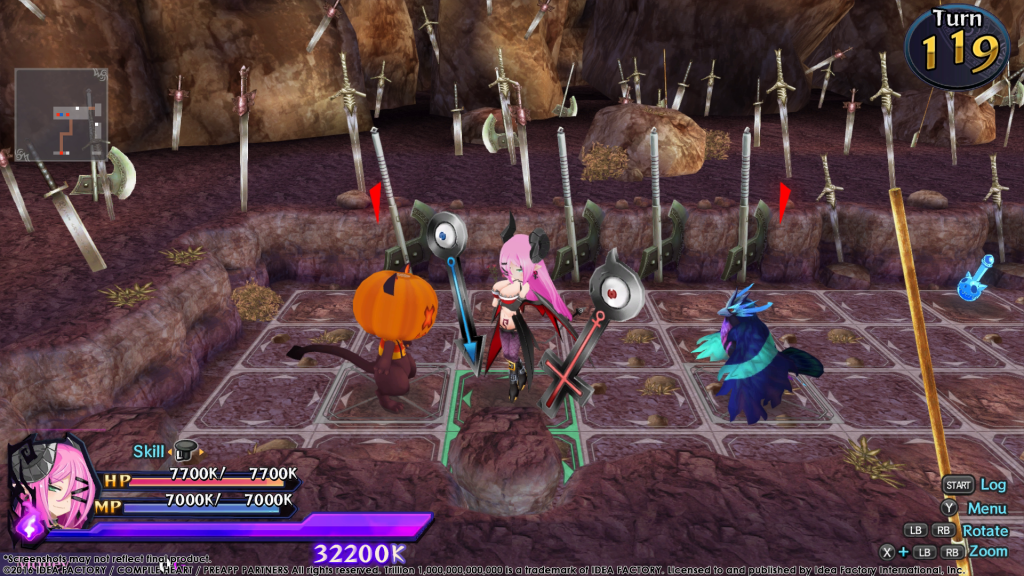 When battling Trillion or Mokujin, they will spawn hordes of enemies in order to slow you down. These two mighty beasts can also unleash massive area of affect attacks, but with a bit of luck you can actually avoid these attacks the majority of the time, thanks to them appearing on the map prior to being unleashed.

The hordes will do their best to prevent you from damaging Trillion, and, if solo, can also be quite threatening. Thankfully you don’t have to go into battle alone, as you are allowed to bring along a limited number of familiars to assist you. These familiars come in four varieties; Close, ranged, support, and tank, with the number that you can bring into battle being determined by your Overlord’s Charisma stat. The familiars do help out quite a bit against the hordes that these two bosses spawn.

In terms of graphics, thanks to the upgraded visuals, everything looks crisper and cleaner than it did on Vita. Sound is about on par, so it is still an impressive package in terms of graphical and audio quality.

Trillion: God of Destruction remains a unique experience, filled with strategic options, loot, and ways to upgrade. In addition, though it spans a variety of different genres, it manages to form a cohesive whole, with a system designed to support both marathon and pick-up-and-play sessions.

Not everybody will enjoy the title, obviously, but those who enjoy unique games should find plenty to.