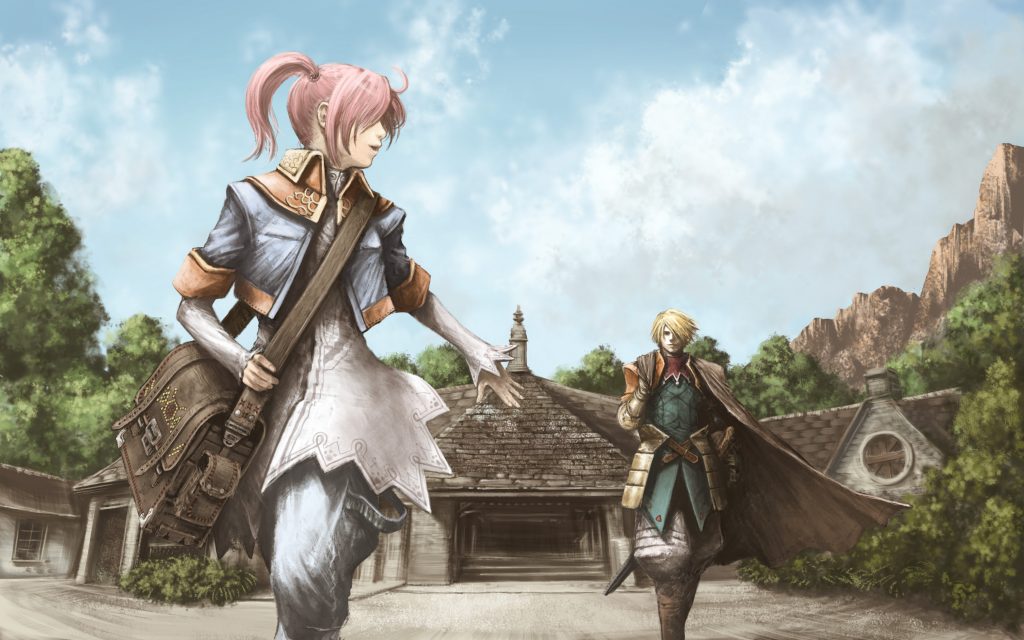 Xanadu Next is a title that is a decade old now, but, aside from a release on the N-Gage, has not been playable outside of Japan until now. How will the aged title feel?

You are placed in the role of one of a few remaining knights who aren’t exactly welcomed any longer. In the beginning of the game, you are travelling with Char, your sister, who has brought you to Harlech Island in order to investigate some ruins and a mysterious castle. This castle, known as Castle Strangerock, has been seen by many people, however when anybody attempted to approach it, the castly mysteriously vanished. 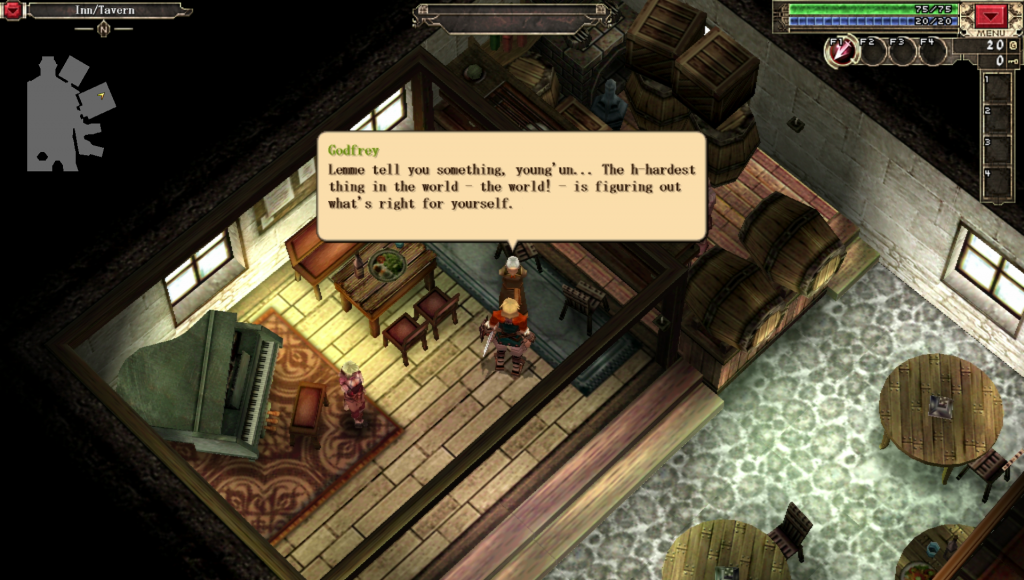 It is said that a powerful sword known as the Dragon Slayer rests within this castle. As you explore the first ruins, you come across a crown, as well as a swordsman who desires this crown and is willing to kill you in order to obtain it. He nearly succeeds, however, a priestess in a nearby church manages to save your life by performing a ritual to bind your life to the island and a Guardian. Now, in order to survive without the binding, your only hope is to locate the Dragon Slayer, which is rumored to give the wielder life and power.

The story doesn’t really sound like anything super special when spelled out like this, but there’s something about the way it’s told through a mixture of ancient tablets, memoirs, and spoken dialogue that can hook you and not let go.

Upon starting the game, you would do well to configure the settings in order to check out the controls for the keyboard and gamepad. While it does tell you how to perform the actions as you play, it doesn’t really tell you what buttons do so. That said, the controls appear to be similar to the controls in the more recent Ys games, so fans of that series may have an easy time adjusting.

The title sees you navigating various ruins and other areas, fighting enemies and leveling up by doing so. Once you have gained a level, you will gain six points to allocate as you please. You are, however, required to go back to the main town’s church in order to do so. If you level up before doing so, you don’t have to worry about losing the points, as they will carry over. 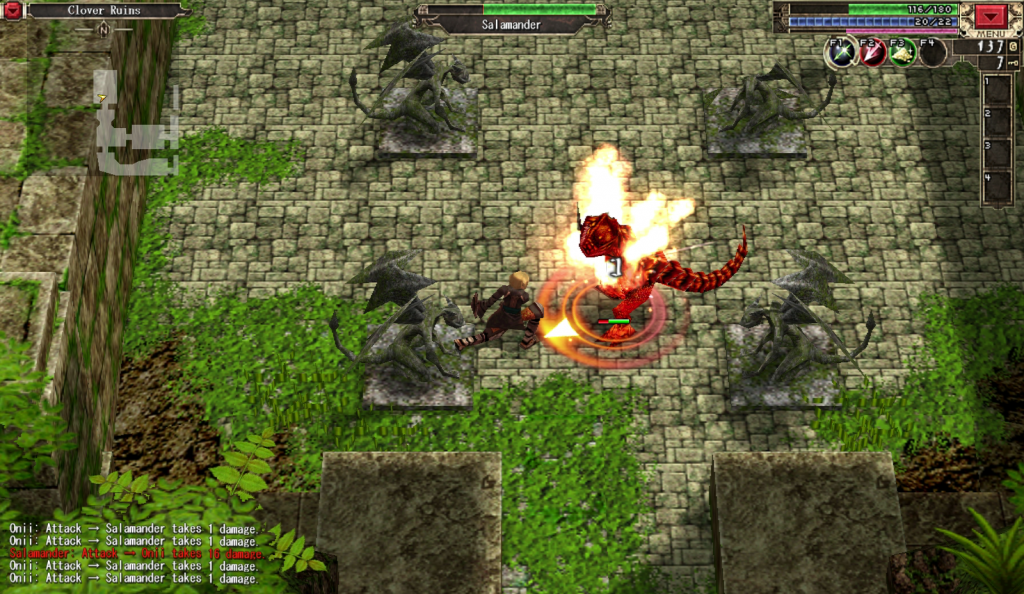 If you decide, prior to leveling up once again, that you want to change the most recent six points around, you are allowed to do so. Once you level, however, you will need to delevel in order to be able to reallocate the points. This can make it extremely useful if you realize that you need to change your stats in order to equip a new item.

As you progress, you will also come across a variety of Guardian cards that you can equip at the church. Each guardian will give you a different effect, such as increasing your maximum health or attack power, and can be leveled up to 10. As it increases in level, the effect it grants you is increased. If you want to swap out your guardian, you can do so at no cost at the church.

The different weapons will also level up as you defeat enemies with them. As you slay more enemies, the weapon, which goes from zero to two hundred percent, will gain experience and be able to deal out more damage. Duplicate weapons will keep all experience that you may have already gained from it, and this system helps add some more strategy into the game, as, while a new weapon may be weaker at first, once leveled up, it can be much more so. 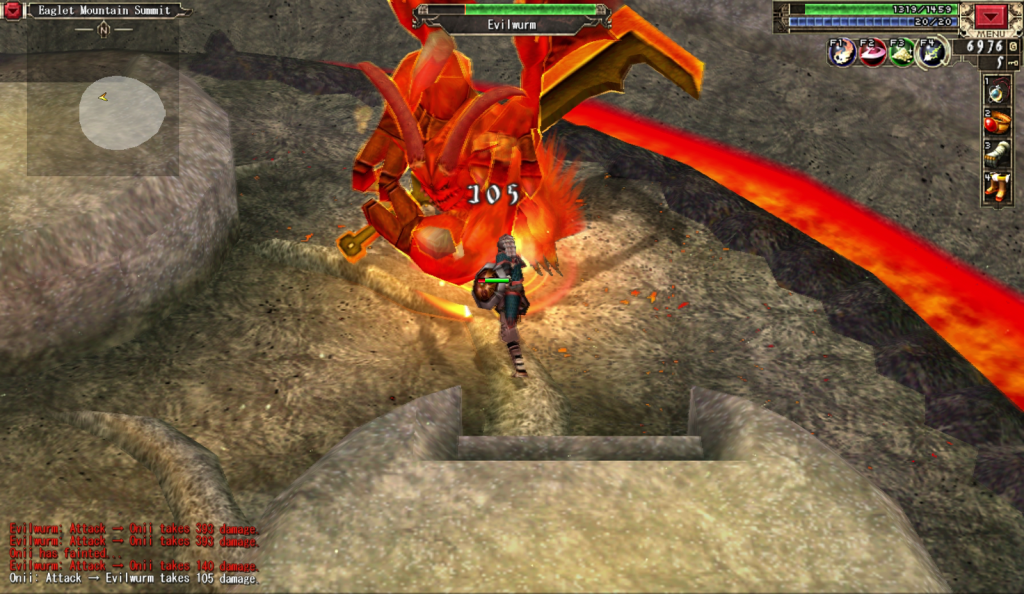 As you explore the areas you will find quite a few locked doors. While titles such as The Legend of Zelda are notorious for having keys for you to locate, they are almost always within the dungeons themselves. In Xanadu Next, you can find keys, but they seem to be quite rare, forcing you to actually purchase keys on a regular basis. As you purchase keys, the price increases, so you begin to have to grind for money in order to advance. You can help keep the cost lower by finding bones to give to the shopkeeper, but this can also be tedious at times. Later on, you’ll have a chance to purchase a knife to carve keys out of the bones yourself, but in the beginning, it can be a bit annoying to have to constantly backtrack and purchase keys in order to advance.

You will, eventually, gain an item that lets you return to town at any time you choose, but this only works one way. There is also an item that will create a portal back to town and let you return, but it is quite expensive and is a one time use. 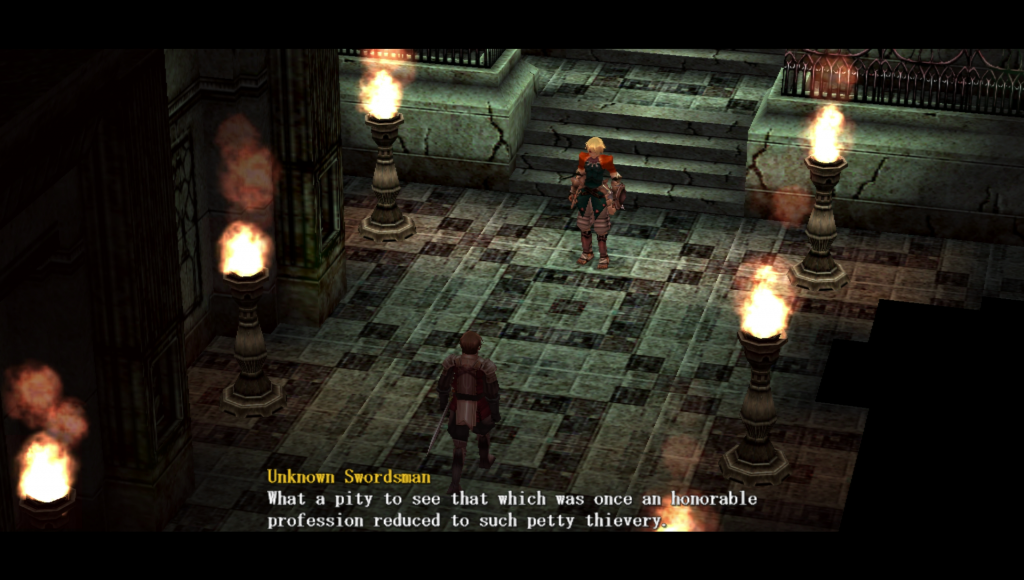 There are also a couple of annoying bugs in the game. For one, it may crash after the first cut scene, as it did with me the first time. It can also reportedly crash after you allocate your level 3 skill points, but I did not experience this one myself. Then, if utilizing a keyboard and mouse at least, if you go into your item menu, you won’t be able to select certain tabs or items as the game will think that you are still trying to navigate the ruins. This makes certain skills unusable, unfortunately.

Being a decade old, Xanadu Next isn’t all that impressive graphically, but it is still solid in both the sound/music and graphics departments. If you’re expecting cutting-edge graphics, you will be disappointed, but it looks and sounds pretty good for its age.

Overall, Xanadu Next is a fun game, but it can be quite grueling at times. It’s fun exploring the ruins, and, as noted, the way the story is told manages to hook you and not let go, but having to constantly return to town and purchase more keys can be quite annoying. Thankfully, almost every enemy appears to drop gold, and clearing a room will spawn a chest typically containing gold, so it isn’t too annoying to grind out. Fans of titles like Diablo should find plenty to enjoy in Xanadu Next.