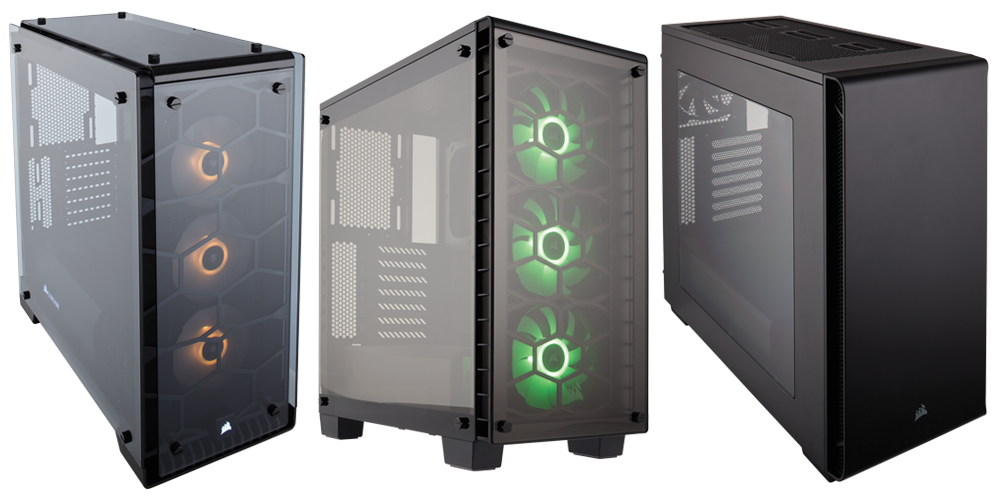 CORSAIR has released three new ATX PC cases. These are the new Crystal Series 570X RGB and 460X RGB pair, as well as the Carbide 270R.

The Crystal Series 570X is wrapped in four individual panels of tempered glass, placing every component of your build on display with sharp lines, elegant styling, and beautiful finish. It has been fitted with three SP120 RGB 120mm fans, allowing users to light up the PC with brilliant LED effects and a choice of colors, all of which is controlled from the case’s front panel.

Of course, with the whole system being on display, cable routing is quite critical. As such, the 570X RGB boasts dedicated cable routing channels and covers to help ensure that your system is what’s on show and not the cords. It can accomodate up to six cooling fans, fitted into removable fan trays for easy installation, and offers up enough space for a wide variety of liquid cooling radiators, allowing for the most ambitious of builds.

Next up is the simple and engineered to perform CORSAIR Crystal Series 460X, which packs all of the performance and expandability you could need into a compact ATX design. There are front and side tempered glass panels that display every component of your system, with three included SP120 RGB 120mm fans allowing for bright and customizable LED lighting controlled from the front panel.

The Direct Airflow Path design helps to minimize the distance between fans and hardware, positioning drives out of the path of airflow while the easily accessible dust filters on the front, bottom, and top help to make cleaning quite simple. It also features tool-free drive instalation and a wealth of cable routing options, including a dedicated modular PSU and 3.5 inch bay cover.

Finnaly is the solid and sleek CORSAIR Carbide Series 270R, which offers up all of the essentials of a high-end PC case while still retaining a spacious internal layout as well as versatile cooling options. You have the choice between a solid side panel or a huge transparent window, and the minimalist exterior does a great job at hiding an expansive interior that’s been designed to make building a PC as easy as it can possibly be.

Here are the official specifications, courtesy of the press release: