When Square-Enix announced World of Final Fantasy at E3 last year, it was meant to be a celebration of the iconic series. Giving many of the well known characters throughout the years a “chibi” style makeover, the game definitely didn’t focus on utilizing the power of the hardware. Instead, it focused on creating an accessible world that takes more than a few cues from the Pokémon series. Even though there is a clear inspiration from the Pokémon franchise, there is more to World of Final Fantasy than meets the eye. 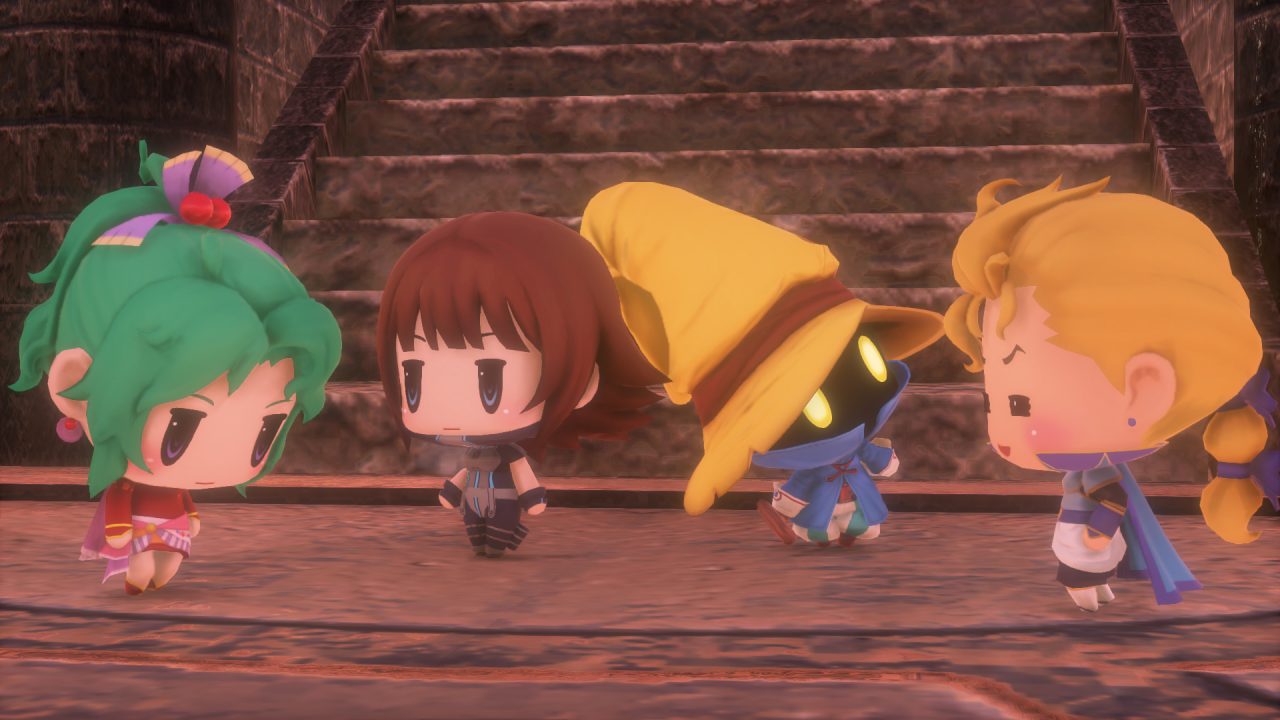 World of Final Fantasy introduces players to twins Lann and Reynn, a brother and sister pair that are suddenly dropped into the world of Grymoire with little exposition. They have just been told that they are “Mirage Keepers”, people with the power to capture and control the creatures that roam the world. This is probably the biggest comparison to Pokémon, as the game encourages players to capture as many mirages as they can along their journey and fill up the Mirage Manual. Using a “Prismarium”, players can capture tons of classic and new Final Fantasy creatures, though with a twist. Unlike Pokémon, where players have to weaken the creature to make catching them easier, World of Final Fantasy instead makes it a puzzle. Using the magic spell Libra, players have to read the mirage description to discover the requirement to “imprism” them. This can range from dealing damage, to causing a certain status effect, to even healing the mirage.

The fact the game makes the capture mechanic more like a puzzle creates a more strategic element when battling every new mirage. Not only is it nice to see the Libra spell practically a requirement, but it is a great way to help players figure out more about the mirage when it comes to resistances and weaknesses. Now unlike Pokémon, the main characters are actually part of the battle, but how they are involved is a bit unique. World of Final Fantasy’s combat focuses heavily on the ability to stack mirages with the protagonists. This is all based on the size, with Lann and Reynn having a medium and large option, always allowing a small mirage to be stacked on top of their heads as well as a large or even extra large mirage for them to stack onto. When stacked, all the characters will pool their health, stats and abilities together, essentially becoming one powerful character. Depending on how characters are stacked, some abilities can even combine to create new ones.

It really requires a little restraint from a player to use the stacking mechanic to their advantage. Sometimes being stacked can make the characters too powerful, meaning it would be easy to one-hit-KO many new mirages. When unstacked, all the individuals are much weaker and much better at handling delicate enemies, or even better for toppling enemies that are also stacked. Going from two powerful characters to potentially six weaker characters can be a difficult transition for many to make with a turn-based JRPG. It’s overcoming this typical behavior that helps the game show some extra depth. Unstacking can even help to minimize the effects of spells like death or doom, as all characters in a stack are affected at once, even if they unstack afterwards.

All the mirages captured can be upgraded by allotting points to their Mirage Board, which works pretty much like the Sphere Grid from Final Fantasy X. As mirages level up, the player can choose what skills they learn on a board, eventually being able to master the board and earn an extra skill. Some of the skills on the board can help for puzzle solving throughout the game, even giving the player access to special areas by using mirages to smash, burn, freeze, or fly their way to them. Think of the Hidden Machines in Pokémon, though a bit more optional. Many dungeons will even give stacking puzzles that require the player to bring mirages with certain elemental resistances and weights, which makes it so the player has to prepare to switch out their mirages to overcome obstacles. The Mirage Board is also where mirages can unlock their transfiguration, the ability to transform to stronger mirages, though unlike Pokemon, a mirage can return to a previous form anytime the player accesses their “Prism Case”, where extra mirages are stored. 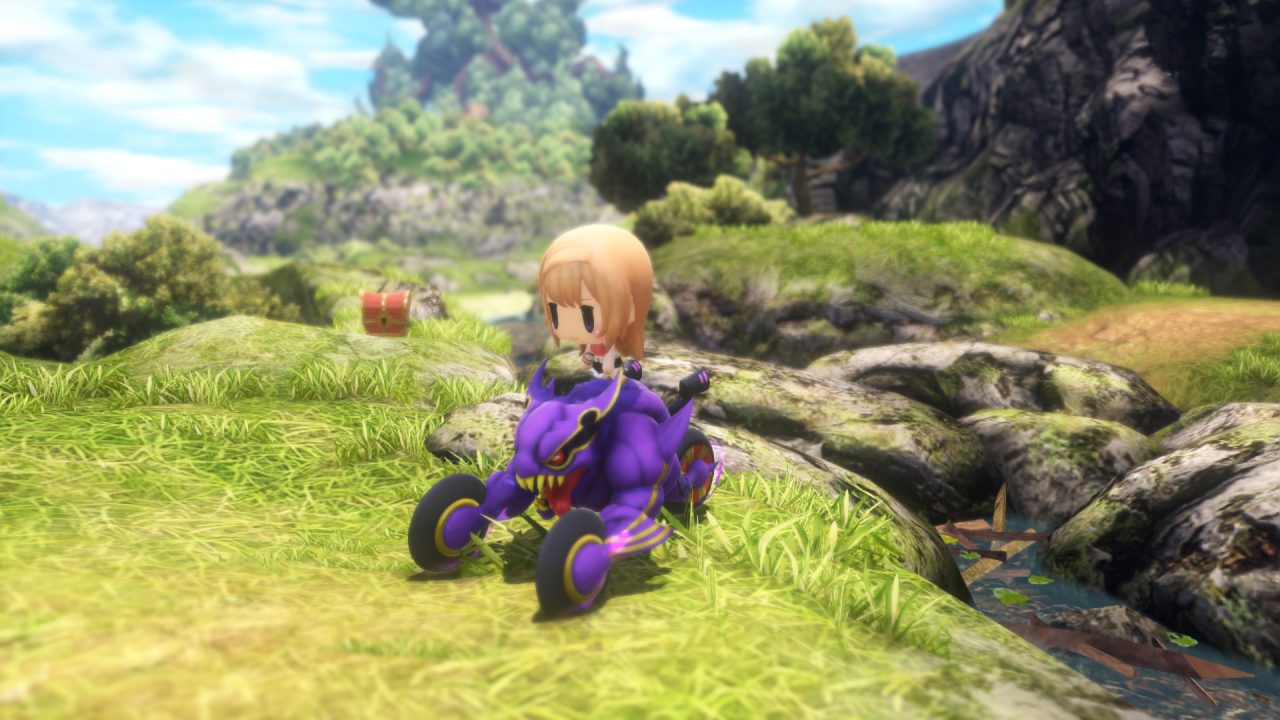 Moving away from the gameplay a bit, the game emphasizes a certain sense of self-awareness, using a lot of jokes that series veterans will definitely get, yet make it accessible enough to newcomers as well. The writing comes off as childish at first, but upon further exploration, it comes off as being very smart and charming. When Lann says something like “what the honk?” or Reynn proves her superiority with puns, it really shows how truly interesting these characters are. It helps that the voice actors chosen, Josh Keaton and Amanda Leighton, were a good fit for the twins. That isn’t to say that there isn’t anything wrong with the writing, as there is another character, the mirage Tama, that may get on players nerves early on. The writers basically gave Tama, voiced by Lisa Kay Jennings, a speech impediment; one that makes her use the word “the” frequently before several words in her dialogue. Even though it starts out fairly annoying, it has the potential to grow on someone as they hear it and get used to it more, especially when other characters reference it. It may bother some people, but even Tama has some excellent moments with the dialogue despite the impediment.

Even though Lann, Reynn and Tama act as the main characters, it wouldn’t be much of a celebration of the franchise if it didn’t have other Final Fantasy characters in the mix. Some characters like Squall or Cloud are expected, as it would be nearly impossible to celebrate the series without them. Then the more obscure characters like Sherlotta from Final Fantasy Crystal Chronicles: Echoes of Time or Shelke from Dirge of Cerberus: Final Fantasy VII get some time to shine, which is great to see some less popular characters represented. Considered as champions of the world, they’re more powerful than the average citizen, and many can become a summon option in battles, though it’s worth noting that the long animation sequences can’t be skipped. At least the chibi-styled characters can look adorable while laying waste to foes. Square-Enix also deserves a lot of props for managing to get many of the respective voice actors to return to their roles, especially given that many are fairly notable like Tara Strong and Troy Baker. 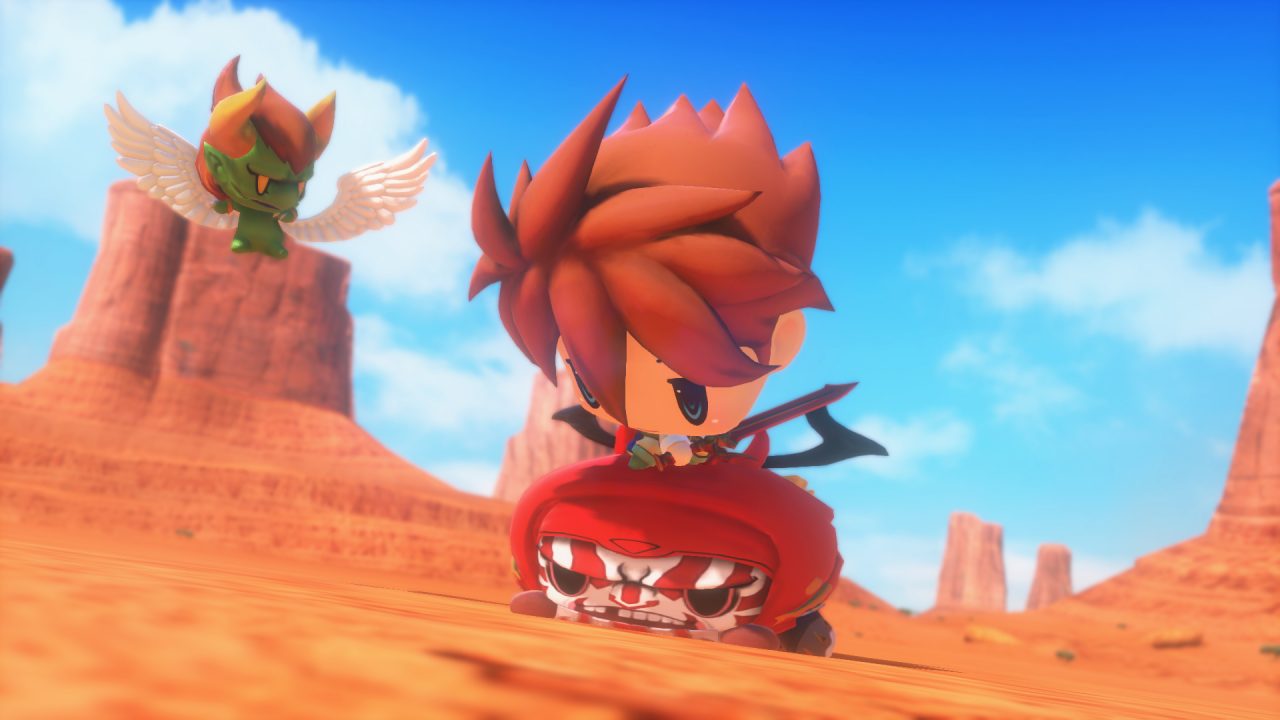 The overall game is adorably charming, as most mirages transition well to a cute design, with some exceptions. Since the game released on both PlayStation 4 and PlayStation Vita, it’s clear that the developers wanted the visual experience to be nearly identical. The environments, while pretty, don’t exactly push the PS4 hardware, and the same could be said about most of the stylized character models. In appearance, it seems much more comparable to the Kingdom Hearts remasters released on the PS3 recently. For fans that purchase both versions, it makes for a nearly seamless transition, with only slight differences in lighting and varying load times. PlayStation 4 players may find the visuals lacking but at least the consistent style and charm should help compensate for that.

As mentioned earlier, this is a fairly accessible title, with a lot for fans and newcomers to enjoy. The accessibility unfortunately hurts the game in the early moments, as the game uses every opportunity to shove a tutorial in your face. Even if a tutorial window will explain the purpose of something perfectly fine, the story may still stop the player from progressing to explain it again. It hurts the pace of the game, and it might turn off players too quickly in the beginning hours of the adventure. If a player can push through the tutorial heavy sections of the game, there is a true gem lying just a bit past it all. 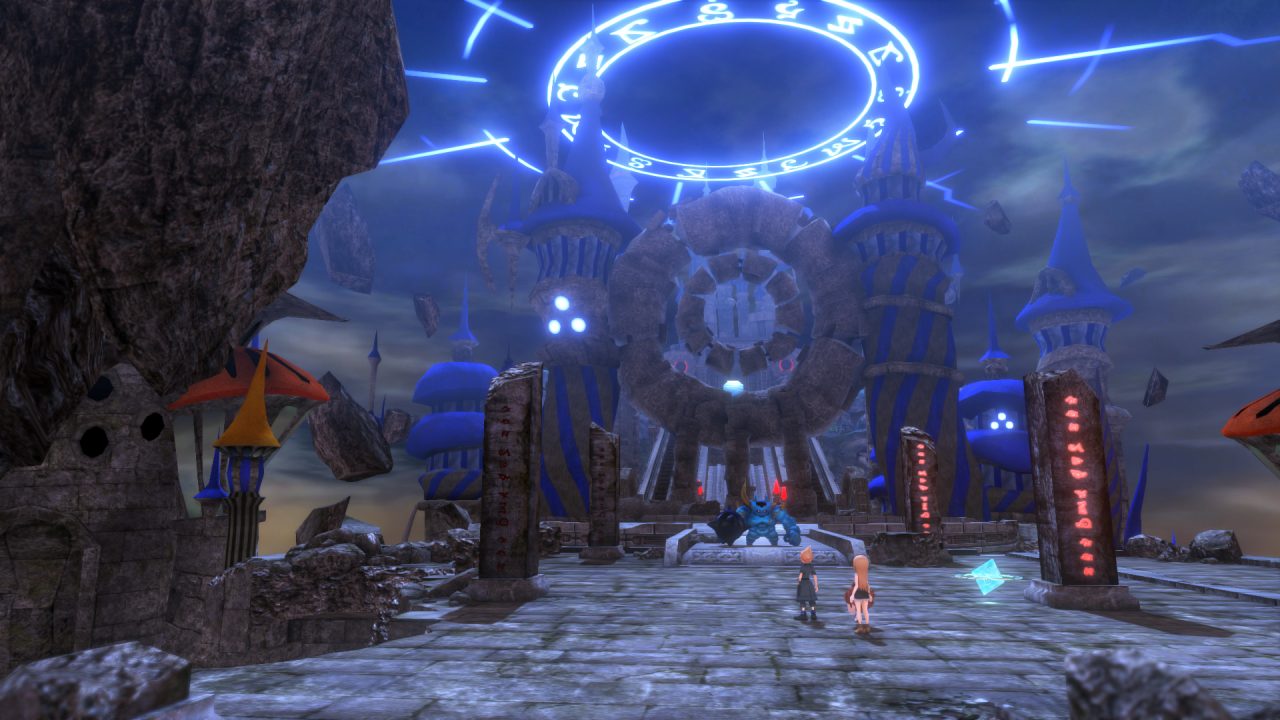 The adventure is packed full of optional quests aside from the main story, giving not only hidden areas in various dungeons, but also what are known as “intervention quests”. Fairly early in the game, there is a room that the player can access that allows them to travel to a point in time in Grymoire, and help out various characters met in the story. Most of these sequences offer hilarious moments, from a Tonberry arguing about nicknames to Shiva being tricked into building an ice bridge. It really helps flesh out the characters in the game and some of them even offer small shout-outs to the games the characters come from.

There’s also a Coliseum that becomes accessible early in the game, giving players access to tons of mirages, many of which only being obtainable in this mode. It would have been better if the battles here offered experience, but considering the unlimited chances to try and imprism the various mirages, it can be considered a fair trade off. There is also a multiplayer mode tucked away in the Coliseum, which allows players to take up to six mirages into battle with other players over the internet. It almost feels like an afterthought given that the box doesn’t even indicate a multiplayer option, but for what it is, it still works. It also gives players the option to trade mirages, which can make filling up the mirage manual a lot easier, though not quite as easy as the GTS made filling a Pokédex in recent Pokémon games. 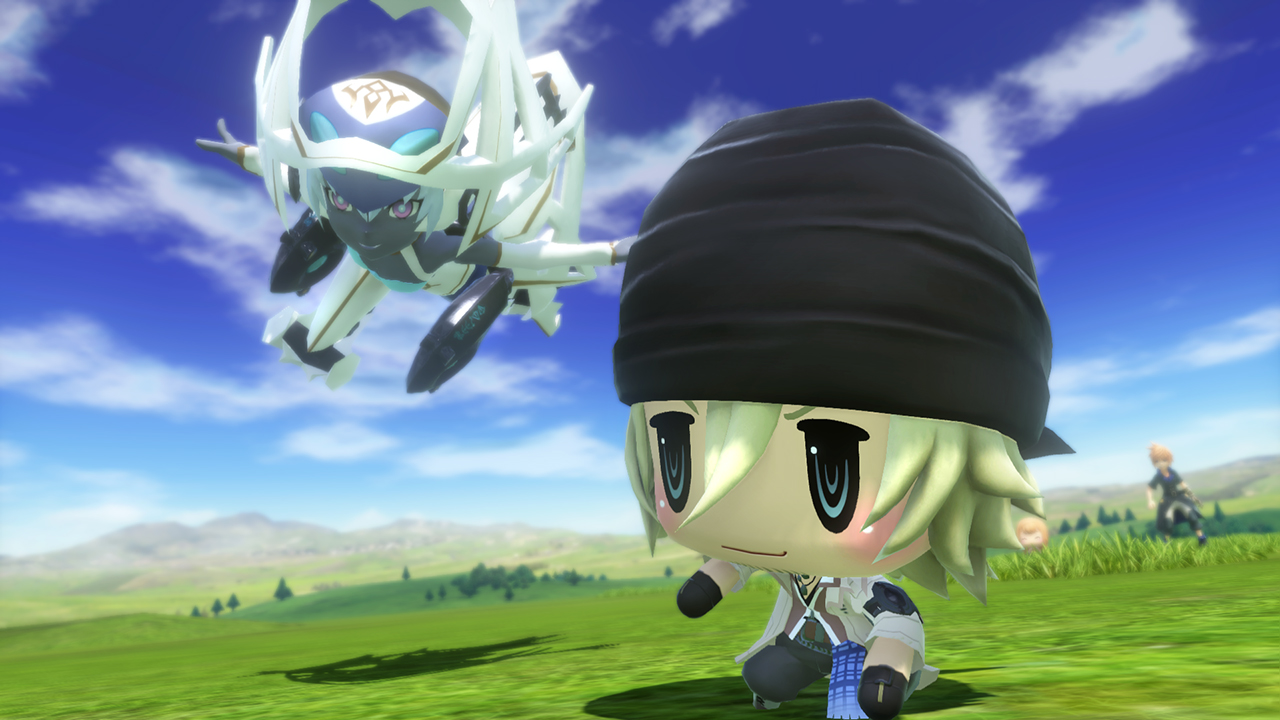 Even after finishing the main story, there is plenty of endgame content with optional dungeons, additional mirages to capture, and many treasures to collect. There is enough content to satisfy the most experienced JRPG fans without overstaying its welcome. After roughly fifty hours, I’ve completed the main story and all the intervention quests, but there were still mirages to discover and areas to find. While there are clear allusions to Pokémon, World of Final Fantasy has enough to make it stand out for fans of the franchise or JRPGs in general. It may not be without its flaws, but it’s a fun ride that manages to entertain the player with plenty of charm and plenty of content.