A few years ago, I started getting into visual novels. Being someone who’s enjoyed reading my whole life (I know; a woman, reading?! What will they let us do next? Vote?! Operate them fancy motor vehicles?! The possibilities are endless!) it just seemed like the obvious move to combine both reading and video games into one thing. Plus when attached to adorable anime style artwork, how could the otaku inside of me refuse? Like a lot of girls in my school when I was younger, I became interested in anime and manga and all that crap. I still am, just not as heavily, and now I pick and choose what I really want to watch or read. I think visual novels are an interesting form of gaming. I mean, especially if you’re looking at gaming from a story aspect, these usually give you a pretty solid story with it, and while the in game animation is obviously rather limited, you buy into it knowing that that’s just what this genre is.

Recently however, my girlfriend and I played Catherine to completion. Catherine, for those of you who don’t know, is a Japanese visual novel/puzzle game hybrid, full with anime scenes, cell rendered 3d cutscenes and lots and lots of horrifying imagery. It follows a man named Vincent, who is confused about if he wants to marry his longtime girlfriend Catherine. One night at his favorite bar, he meets a new girl, named Katherine. After sleeping with her, he starts having terrifying nightmares (cue the puzzle part of the game, and honestly, this is the majority of the gameplay) where he and a bunch of sheep are chased by things such as, oh. babies with chainsaws coming out of their eyes. Ya know, typical Japanese fare. The thing is though, this game isn’t technically a visual novel because it’s got that puzzle block aspect. It’s also not cute and lovey. It’s downright fucking terrifying. 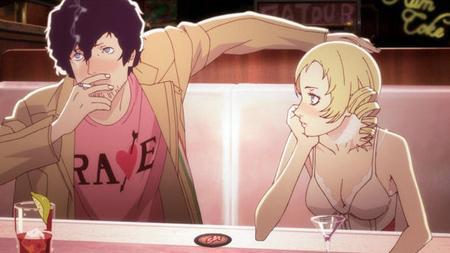 As someone who can terrify men myself (simply because I’m a female who owns collarbones, which can clearly start world war 3), I appreciated the game. It was unique, it was fresh, it was creative. I’ve heard so many people call it ‘bad’ or some variation of ‘bad’, and sure while it might boil down to what is essentially a sexy tetris game, in the end it is totally and completely unlike anything else on the console. The presentation and everything involved is so different than any other game, especially worth it if you like horror or Japanese media.

But that aside, I do fail to understand why visual novels aren’t as popular as “mainstream” gaming seems to be. Is it because you have to…read? I know, I know, a terrifying concept. Pages! Covers! PHYSICAL MEDIA! But is that why? Is it because it’s not as immersive as other game types? That I could understand, but I don’t necessarily agree with. I think visual novels could be the most immersive game genre out there, personally. Reading itself is immersive, and when added to an actual visual, it has the potential to be the most immersive gaming experience there can be outside maybe VR. Either way, I highly recommend visual novels and Catherine, especially if you’re just searching for something different than your usual canon fodder. The other cool thing about visual novels is if you learn how, you could make them yourself, and if you have the ability to run them, there’s tons that are FREE. That’s a pretty sweet deal. So give it a shot, yeah?

And maybe don’t cheat on your girlfriend. That’s…that’s a really good idea too. ‘Cause you never know, she might just turn into a giant monster with tongues covered in spikes coming out of her boobs. Play visual novels and be faithful to your monster girlfriend. Solid advice, if I do say so myself.