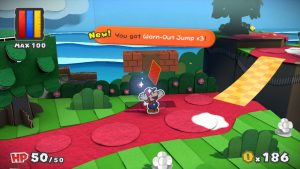 Paper Mario: Sticker Star was a good direction for the Paper Mario series. Sure, it was polarizing for some, but it made for a good risk/reward system and a fun game.

Now, the Wii U Paper Mario: Color Splash has taken everything that made the 3DS game good and improved on it, making this one of the best and entertaining entries in the series to date.

The game kicks off with Princess Peach showing Mario a postcard she got in the mail of a colorless Toad, sent from Prism Island. So, the team sets off to the port to find color disappearing everywhere, being sucked away by Shy Guys. So, it shouldn’t come as a surprise that the overarching story is Mario facing off against Bowser like normal to recover the six paint stars, and the mini paint stars, that have been taken.

What is unique, though, are the different side stories that take place throughout the game. Whether it be helping a haunted hotel or joining up with pirates, there’s a lot of interesting storylines that will make you interested to see where trying to find colors will take you next. 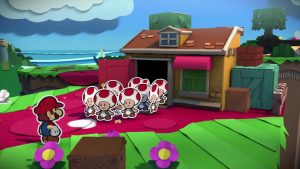 he script for Color Splash is also greatly written. There are plenty of jokes and puns here, and the game’s personality is bursting at the seams. Even simple enemies such as Shy Guy’s crack jokes and have wit about them, something that’s enjoyable to see.

Most levels will have you facing enemies with your deck of cards you build and find. Like in the 3DS title, using a card will use it for good, requiring you to buy new cards or find them. Cards can either be used unpainted, causing less damage, or by using up some of your color to paint them, giving a harder hit. However, some cards are also pre-painted, meaning you just have to select them and they’re fully powered up to use.

Cards range from jumps, mushrooms, fireballs, hammer hits and more, as well as Thing cards. The Thing cards, such as piggy banks, fire extinguishers and more, are rare and powerful, but are often needed for an environment puzzle or boss battle. If you mess up and use one by accident, don’t despair. You can always buy a new one at Prism Plaza or get a new card from its original spot in the game.

Like usual, tapping A at the right time can give you an extra boost in attacks, and allow for multiple hits to be strung together. Battles also have good worth here, as they can give not only coins and cards to use, but pieces of hammer that can increase the amount of paint the hammer can hold. 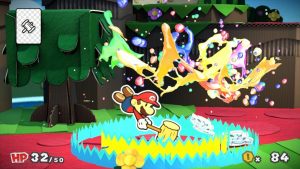 tside of combat, Mario uses his colored hammer to bring color back to Toads, walls, plants, buildings and more. Sometimes it just gives you a new item to whack to get more paint to use, other times it can lead you to a new area with items you can grab.

There are also a lot of puzzles to take on as you jump and explore as well. Most puzzles are solved via the cutout feature on the touch screen, where you alter portions of the stage to reach places you normally couldn’t go to.

Given that it’s a game all about color, it should come as no surprise that this is one of the nicest looking Wii U titles out there. Screens pop with color as you hammer it down, making the landscape come to life. Plus, even the 2D figures of Mario, enemies, Toads and more look crisp and clean as they hop and walk around the stages.

Final Thoughts: Overall, Mario: Color Splash is a step in the right direction from the 3DS title, and a great title to enjoy for any action adventure fan or Mario fan. The story is a blast to experience from beginning to end, and combat, while it can grind a bit repetitive after a while, is still enjoyable as you move from area to area. Wii U owners won’t be disappointed by checking this out.