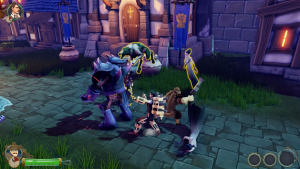 Years later, Minecraft is still a fairly big phenomenon. Sure, it’s not as big as it once was, but it still has a pretty large following.

One thing the block builder always lacked was a full story mode, though. Something to make your building really feel accomplishing and wanting you to progress forward.

Dragon Quest Builders fills this niche perfectly. While it doesn’t have the usual turn-based gameplay the series is known for, the transition to block destruction and block building is a smooth one. There’s still an evil being taking over the world, and a hero is needed to make sure he doesn’t succeed.

While the hero is taking care of business, though, your character, The Builder, is left to make sure cities come together smoothly again and try to return to their normal life. The game makes the Hero/Builder distinction early on. So, while Dragonlord (in a continuation from the first game) isn’t wiping out humanity right now, he did steal their ability to build and create, something you can restore by building what they ask. 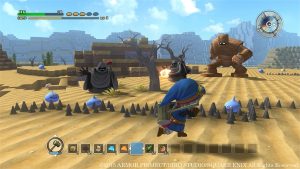 Building items from a third-person only perspective takes a bit to get used to. An outline shows where the block will be placed, and R1/L1 will raise or lower the block a level. If you miss where you want to go, it’s pretty easy to break down and try it again. What’s harder, though, is building an enclosed room, since the game doesn’t switch to first person when you move inside a building.

As The Builder, you don’t actually level up like a normal RPG. What does make you more powerful, though, is creating new buildings, building stronger weapons, armor and more. By the end of a chapter, you can have a nice, sprawling settlement, with plenty of enemies (and a few bosses) taken down to get materials and special items. You’ll be fully suited up, ready to take on whatever the game throws at you in the area….until moving to a new chapter and losing it all. 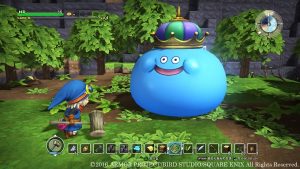 However, even starting over from scratch doesn’t seem like a loss. You still feel a huge sense of accomplishment from getting that part of the world back to normal before moving onto the next area to help those needy citizens out.

As mentioned earlier, there are plenty of well-known Dragon Quest enemies to face during your travels. From Slimes to Golems and more, you’ll take out plenty of enemies to get materials to make items while exploring. Each chapter ends with a boss, complete with a special item, such as a ballistae, to build in order to help fell the beast.

Combat could use a bit of polish, but doesn’t come off as bad. The camera sometimes tricks you into thinking you’re closer or farther away from enemy then you are, leading to you to swing and miss or take an unneeded hit. However, this wasn’t cumbersome enough to become frustrating. 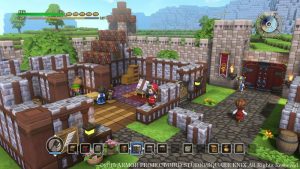 What really got me hooked in this game, compared to Minecraft were the quests. There are plenty of mandatory quests offered to rebuild cities, defend them, bring villagers items and more. After wrapping up a chapter, side quests do become available to really polish off a particular settlement and help that area shine.

If you are looking to just have fun and build in a Dragon Quest world, you could, but don’t expect access to too many materials until you start progressing the story. There is no free build mode. Instead, Builders is all about the story. Plus, the story is pretty entertaining, including some fourth wall jokes that make it enjoyable.

Though it has some flaws, Dragon Quest Builders shows how a good story mode can really be implemented in this building genre. The boss battles are mostly fun (with a few exceptions, such as the second boss), quests make your buildings have meaning and a plot, although simple, really makes the game stand out when compared to other titles. A few small fixes to combat and the building camera, along with MULTIPLAYER, could really make this game, or a future sequel, stand out.