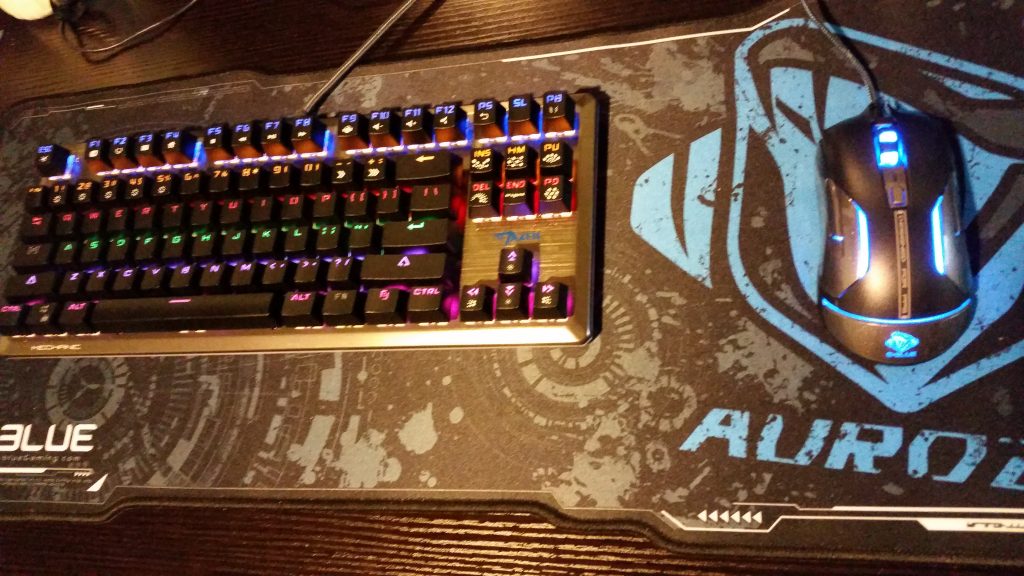 You’re probably thinking, “Why are you reviewing a mousepad? Seriously?” When I saw the box for the E-Blue Auroza Mousepad I thought the same thing, really. “Oh, it’s a mousepad. Great.” Turns out it’s actually one of my new favorite pieces of hardware on my desk.

Tons of us have encountered those traditional, throwaway mousepads that are usually eight-or-so inches on each side and either feature pictures of kittens and flowers or ads for a local mechanic. They were a big deal back when mice used rubber trackballs instead of lasers on the underside, then vanished when the first few laser mice arrived. For gamers, mousepads create a large, consistent, padded surface for quick movements. If you think they’re not important, try lining up a sniper rifle shot while your mouse is at high sensitivity, and then watch the screen jump five feet as your mouse gets stuck on a weird patch of wood on your desk. Gaming setups are about consistency and reliability, and a good mousepad provides both of those things.

The E-Blue Auroza Mousepad, on the other hand, is a great mousepad. It’s a 3mm thick, oversized pad that stretches out just over two and a half feet long (800mm for you metric fans), and is decked out in the Auroza brand’s signature electric blue. For me, the pad holds more than my mouse; there’s space for my keyboard and cell phone as well. Having them all on the same mat makes my desk feel more cleaner, more organized, and gives me a consistent tactile experience whether I’m typing or using my mouse. Still, chances are you’re more concerned about its gaming applications, and though my kill-death ratio didn’t improve with the mousepad, I found that my movements felt smoother and more consistent than my bare desk.

Whether I was using the Auroza FPS Gaming Mouse or the Logitech G403 Wireless, I definitely prefer the experience of being on the Auroza FPS Mousepad. With a smooth texture, raised edges to prevent fall-off, and tons of space, the mousepad both feels and looks great. It’s a great addition to any desktop setup, so long as you like black and blue.