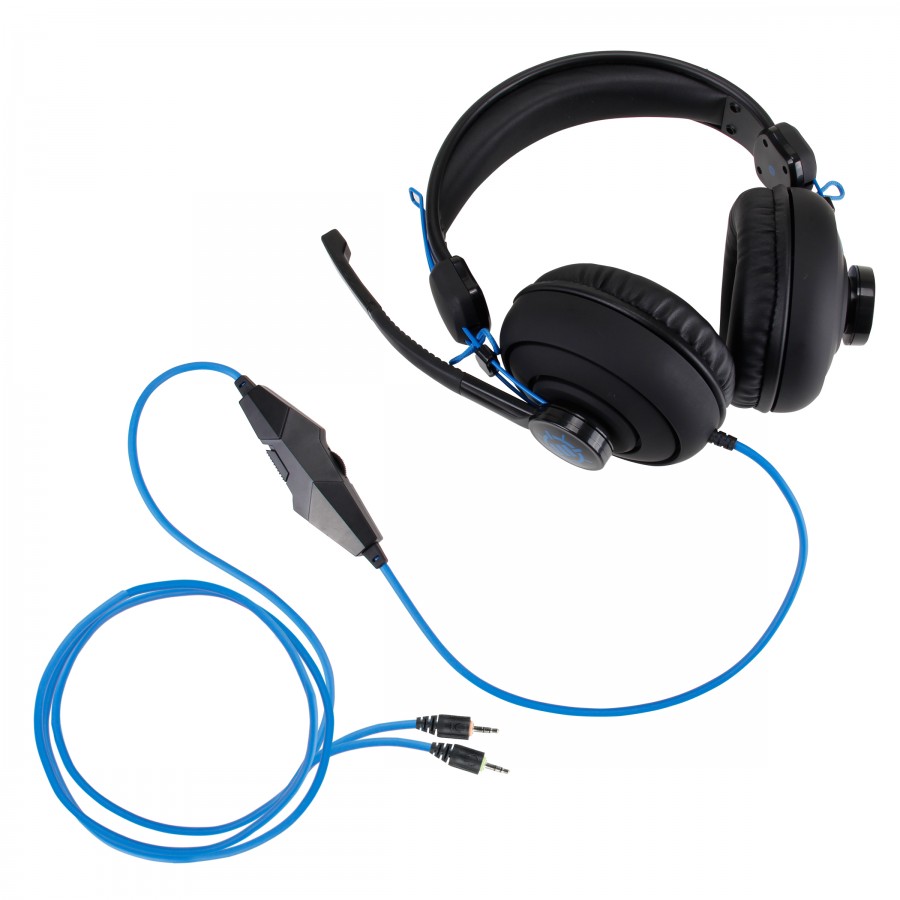 Wrapping up our reviews of the budget gaming accessory Enhance line is the GX-H3 headset, one that can easily support gamers, no matter what side they like the mic on.

The headset goes great with the mouse reviewed a few days ago, coming with a blue and black design style (don’t worry, if you weren’t a fan of the print the headset doesn’t feature it). The headset needs no drivers to install., and just plugs in to the 3.5 mm input, not the USB drive.

Instead of featuring a cord like the keyboard, the cord for the headset features plastic. While it is nice a long to allow for freedom for your head to move around, I’ve always had issue with plastic wires in the past as they start degrading and breaking apart after lots of use. While I saw no issues with breaking down during my use, only time will tell if they ever do.

The headset itself has oversized round ear muffs, which were soft and comfortable around my ears, even during extended sessions. The set is also relatively lightweight, meaning I had no issues with strain or discomfort even after a night of gaming.

Like standard gaming headsets, the mic control is situated high up on the cord, letting you mute and change the headset volume. One thing lacking here is the ability to balance chat volume with game volume, but that typically tends to be a higher-end feature.

A good news for gamers that don’t like the mic on the left side of the headset is that it does twist around to the right side, letting you flip the headset around as you want to. It seems like a small thing to mention, but with so many headset not allowing that, it can be important for that set of gamers.

As far as the sound goes, the GX-H3 is pretty crisp and clear. There’s no muffled sound as you try to hear the action around you, and you can pick out of something is going on left, right or behind you pretty easily. The headset can give most mid-range sets a good run for their money here.

The mic also handled surprisingly well. An issue I run into a lot is that mics don’t like to pick me up and, when they do, it sometimes comes in muffled, especially with your mid-range $60 sets. So, it was a sigh of relief to hear that my voice came out on the other end fine with no cutting out. They said it was sometimes a tad muffled, but a quick readjustment often fixed that.

Like the other Enhance gear, the big draw is the price point. This time, the headset clocks in at $35, well below what you’ll normally find at a store for the quality it offers. Plus, readers can save $7 through Oct. 17, 2016, by clicking here and entering the code SAVEGXH3 at checkout.

Overall, the headset is probably the top of the three accessories I’ve checked out from Enhance. While I’m not thrilled with the plastic cord, the quality of the sound and the mic came as a surprise to me during gaming sessions. If you aren’t a huge audiophile, do yourself a favor and save a few bucks by checking the GX-H3 out.