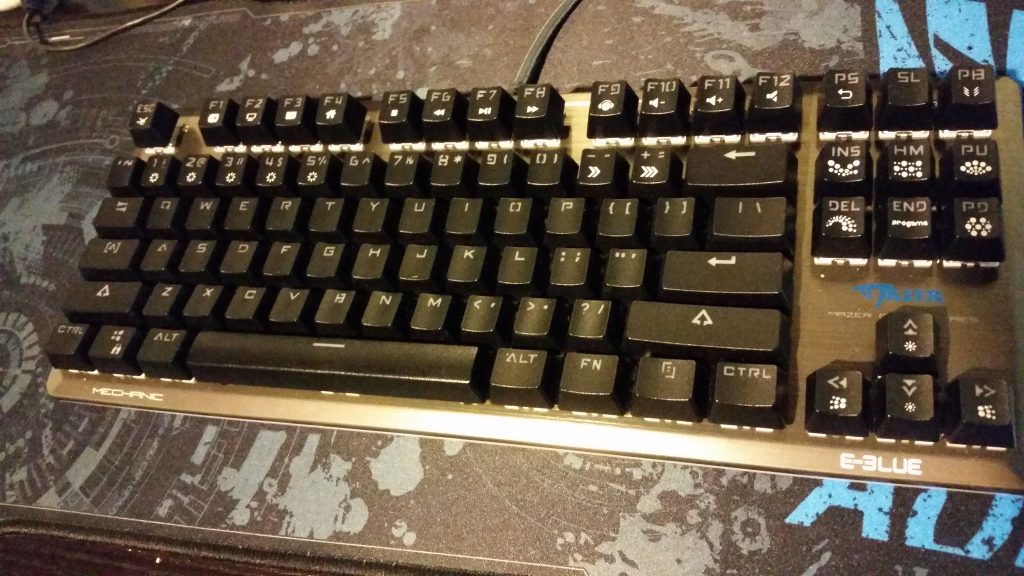 Plenty of companies want to take advantage of the passion games have for their hardware. PC gamers want great function and great fashion as well, and much of this shows through the choice of keyboard. E-Blue Gaming sent over a sample of their FPS Mechanical Gaming Keyboard for review, and we tested it out. Though it doesn’t offer all the bells and whistles of fancier keyboards, the FPS Mechanical makes for is great for the gamer just getting started fancying up their gear.

The FPS Mechanical Gaming Keyboard is an 87-key USB keyboard. Like many gaming keyboards, this model lops off the number pad on the right-hand side to make it take up less desk space. It performs the same way you’d expect any keyboard used for games to: it supports N-key rollover, so no matter how many keys you press simultaneously, all your button inputs will register. Mechanical switches support each key, providing increased tactile feedback when compared to conventional dome keyboards.

The FPS Mechanical doesn’t specify what style of switches it uses, but they feel comparable to MX Cherry Blues. It’s a super-clicky keyboard, and you’ll need to put some pressure on the keys to get responses. As a typist I like having more resistant keys, but they tire my fingers out faster during long gaming sessions (particularly with first-person shooters, coincidentally). Many gaming keyboards default to Cherry MX Red-like switches; I’m surprised that this FPS-branded keyboard didn’t do the same. 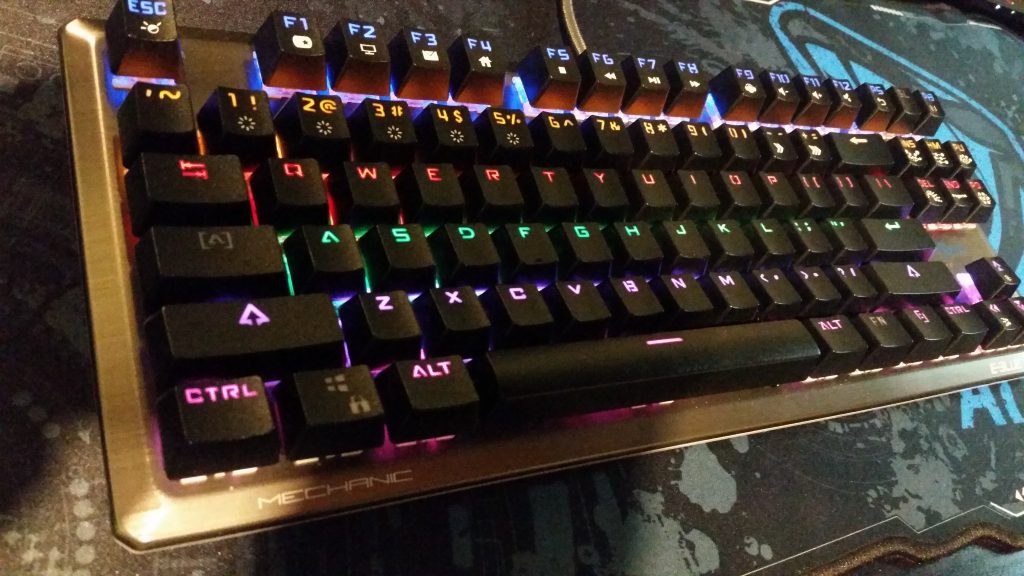 Visually, the E-Blue FPS Mechanical looks great, even if it lacks some of the customization options of other keyboards. The keyboard housing is what the company terms “alu-metal;” it’s got a great metallic finish and feels cool to the touch. The keys themselves are plastic and backlit, but each row on the keyboard has its own static color. Unlike RGB keyboards, which allow full color customization, this one only allows you to configure on/off patterns. This means red keys will always stay red, and blue keys will always stay blue. The keyboard locally stores all the lightning configurations, so no driver installation is necessary.

For those who want to show off without too much work, the FPS Mechanical also comes with some pre-configured lightning patterns to simulate waves, explosions and the like; I set it up so that all the keys stayed on permanently, making it easier to see in the dark. I also really like the purple light that runs around the bottom of the keyboard. It reminds me of underlights used for high-end sports cars and the like, and adds a touch I didn’t expect.

I’d have loved to have full RGB customization instead of sticking to the default color set, but the E-Blue FPS Mechanical Gaming Keyboard is a good choice for gamers looking to get their feet wet for under $70. The tactile feedback is great for typists and gamers who want to add a little extra punch to their keystrokes, but if you’ve got roommates or officemates you might disturb, then another keyboard is likely the right one for you.