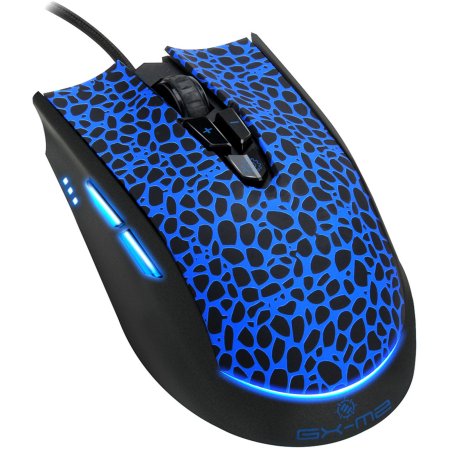 Continuing with the Enhance line of reviews, we now have the GX-M2, the blue and black mouse.

While the image above may have the mouse looking odd, keep in mind that it does come in traditional black as well for those that want a more standard looking mouse. Personally, I liked the different touch compared to a normal monochrome mouse, and it was a good idea of a way to give the mouse some color and uniqueness to it without adding LED lights like other gaming mice have, which would raise the price.

Unfortunately, one downside I found out about the skin was that it started to peel by the corner of the left and right click. I’m not sure if the adhesive just didn’t hold well enough or what, but it led to some black areas on the edge of the mouse with more of the skin barely holding on after a lot of use. So, if you think you’ll be putting the GX-M2 through its paces, you may want to go with standard black.

I also found the pointed ends a bit of a nuisance as well. I tend to rest my fingers on the inside edges at the top of the mouse, and the curved up edges I either ended up irritating my fingers on or would lift the click up with my nail when idle. I think a more rounded edge would’ve been better here.

The mouse itself is definitely made for right-handers, with two buttons on the side of the mouse. If you don’t use the buttons, though, lefties could find this mouse comfy as well, as it has no inherent curve to make it favor one hand over another.

A plus the skin did provide is a softer feel compared to other mice at a lower price range. It’s also a bit oversized, fitting both smaller and bigger hands fine. Overall, the mouse features eight buttons: the three standard, two thumb ones on the left side, two DPI switches behind the scroll wheel and a profile switcher.

The DPI switches let you jump between 800, 1600 and 3200 DPI, while the mouse itself has a 500 Hz polling rate (although the included software lets you change that). I did notice the mouse would register slight twitchy movements, even when perfectly still, but a slight lift took care of that.

Again, like the Enhance keyboard, the huge draw will be for gamers on a budget. This time, the mouse clocks in at only $15, which is great when you compare it to other mice of that price range (usually off-brand. However, the M2 lacks some higher DPIs and settings that many other major gaming mice now come with today.

Readers have a chance to get the GX-M2 for half off until Oct. 12. Just visit Amazon.com and enter code GXM2SAVE at checkout to get $15 off.

For $15, casual gamers can’t beat the price for a customizable mouse for gaming. While the GX-M2 may lack some high-end features, it has enough options and a nice look to make it worth checking out if you’re on a budget.