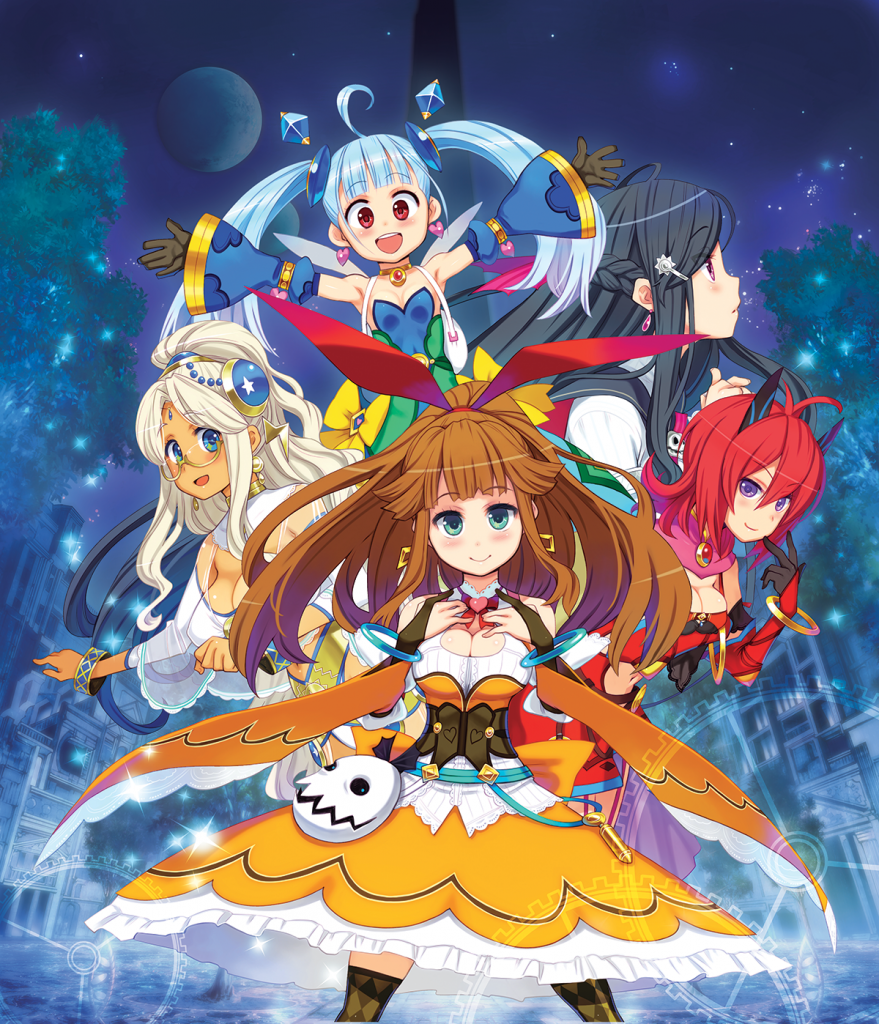 Recently Compile Heart and Idea Factory have unleashed another dungeon crawling role-playing game by the name of MeiQ: Labyrinth of Death. How will the new title hold up, particularly with so many others on the system?

MeiQ: Labyrinth of Death takes place in a world that has ceased to turn. This is not the first time an event like this has occurred, but to restart the world itself, a chosen Machina Mage must wind the Planet Key.

Five Machina Mages, who each come from a different corner of the world, are sent to Southern Cross, where they must move through each of the city’s towers in order to gain the blessing of the guardian of each, then cleanse the spring by drinking and bathing within.

You take control of an overly cheerful and bumbling girl known as Estra. She is basically what you would expect from your typical anime heroine, with the other four also falling into some stereotypical roles. One, named Flare, is rash, uninterested in being friendly, while the glasses wearing Maki is the most knowledgeable one. Setia is the shy one, lacking confidence, and Connie is the youngest.

Overall, the story itself feels rather generic, however, there is something, perhaps how the characters interact, that makes it click together.

As typical of the genre, you will explore dungeons from a first-person view, with the map drawing itself out as you walk through each labyrinth. All of MeiQ’s dungeons tend to be on the large side, with winding corridors, so some may be put off by the idea of having to constantly turn, but the game combats this as well. If you run into a wall with one direction to turn, the game will automatically turn so that you move in said direction. In addition, if you feel that walking is going too slowly, you can press the circle button to begin dashing through the towers. 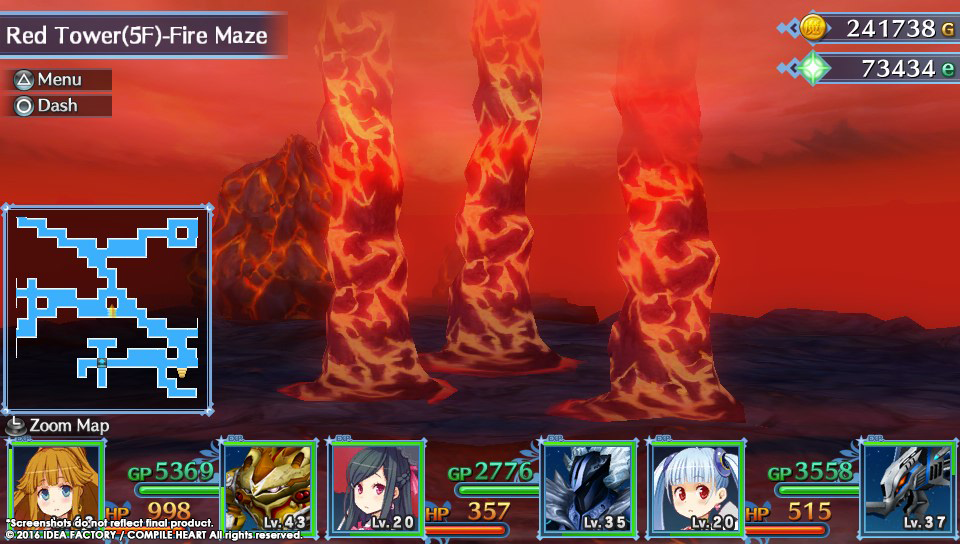 In terms of encounter rate, it is surprisingly low, which, depending on your point of view, can be an extremely good thing or an annoying thing. It can be good for the fact that you don’t have to worry about getting ambushed every few steps, however, it can be annoying when you need to grind a bit and the enemies just won’t attack you. Luckily there are some accessories you can utilize in order to either increase or decrease the encounter rate.

Your characters each has a guardian that can be equipped with varying cores, bodies, and arms. Each arm has a different set of attacks, and you will have quite a few combinations to tap into as you explore the dungeons. You will also be able to slot stones into the cores of your guardians in order to alter their stats, or even give them more opportunities to attack. In addition, you can attach seeds to your mages to adjust encounter rate, add bonus stats for certain elements, or add in bonus experience and money for when you are victorious in battle. Estra also features the ability to change her outfit, granting her different bonuses. 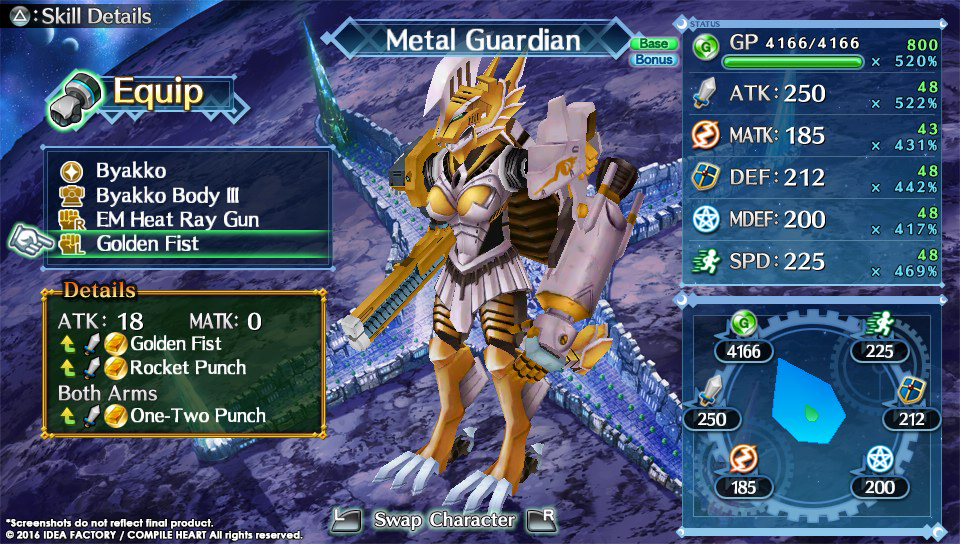 In the battle itself, you can utilize the attacks inherent to the parts on your guardian, or, if you prefer, you can utilize the magic, attacks, items, or even defend with your mage as well, although you should note that certain actions will make your mages vulnerable to the enemy’s assault. 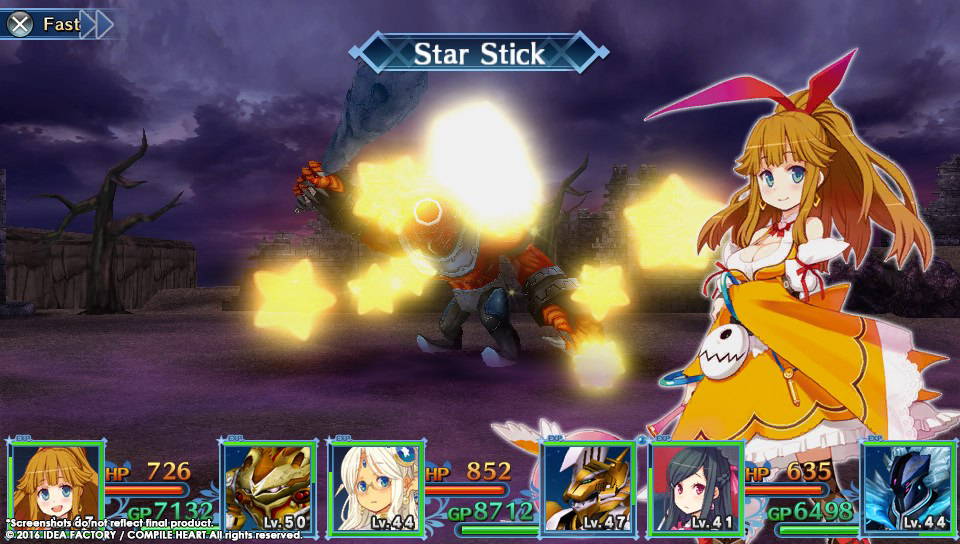 Once you have your actions chosen, if you wish to repeat them you can do so with a simple press of the right shoulder button.

MeiQ: Labyrinth of Death also features an elemental system, which makes certain attacks more or less potent against certain enemies. With each guardian featuring its own elemental strengths, as well as the mages, you should learn the weaknesses and strengths of the five different elements; Wood, Earth, Fire, Water, and Metal. This helps give a reason to change up things with each dungeon, rather than sticking to the same tried and true strategy.

All of the customization and experimenting in battle can be fun, however, the menus are a bit slow to load at times, making it tempting to just try to power through without changing up too much, unfortunately. This can be fatal once you run into a boss, as it can decide to unleash its assaults all on one guardian, taking it down in one round. 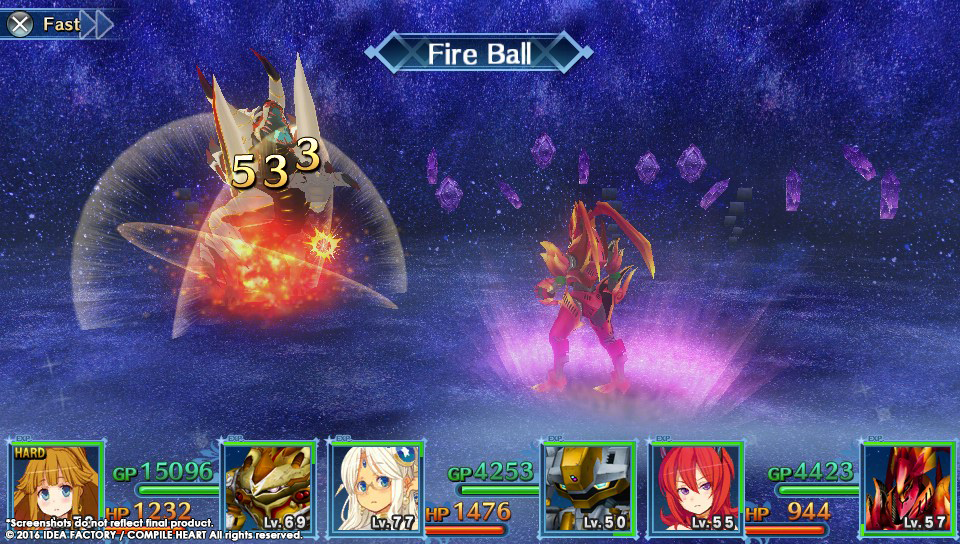 If a boss does annihilate your party, the game lets you know what percentage of its hit points you have managed to inflict in damage, as well as a tip explaining your odds, such as “You have no chance, grind some more,” or “You can do it with the right tactics”. These tips aren’t very in-depth, as you can likely tell from the examples.

Once dead, you will spawn back at the inn with no losses, and can move back into the tower you were in. This inn is the only way to permanently save, and is free. Death has no repercussions, which is weird; You can fight two bosses back-to-back, lose against the second, then only have to worry about the second upon arriving back.

On terms of saving, you also have the option to do a suspend save anywhere, and you do not have to stop playing. There is only one suspend save slot, however.

The graphics are nice, but nothing really special. The dungeons do not lack in variety, but, unfortunately, you will be looking at walls a great deal. In battle, animation is limited. That said, the 2D sprites are quite well drawn and feature a few different poses and movements as the story plays out.

The music is also quite nice, for the most part, though a few of the tracks lack impact.

If you’re looking for a decent dungeon crawling role-playing game, then MeiQ: Labyrinth of Death, despite its flaws (personally I would count the lack of death repercussions amongst them) should scratch the itch nicely. The systems help prevent it from being just a straight-forward crawler, and the ease of exploration helps keep it from becoming too stale too quickly. If a bit more had been added, it could have been a fantastic game, but as it is, it is still a fun little experience.