Superpowers and Poo Powers Collide in South Park: The Fractured But Whole 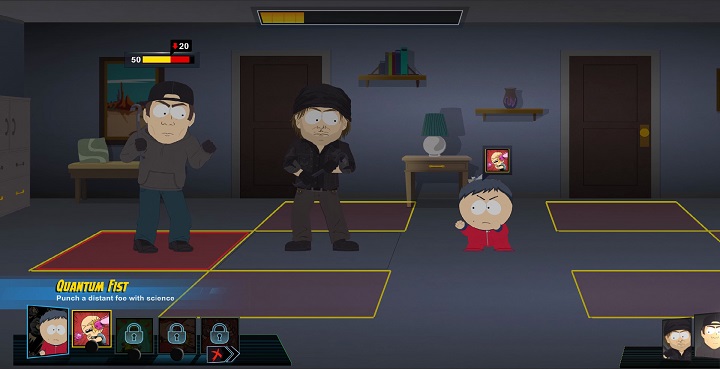 South Park: The Stick of Truth was 2015’s surprise smash RPG hit. The gameplay felt a bit shallow, but the visuals and comedy felt ripped straight out of an episode of the show. Featuring loads of potty humor and vulgarity, Stick of Truth left fans begging for more. There’s a new South Park game on the way, but South Park: The Fractured But Whole isn’t a fantasy RPG anymore; this time, it’s all about superheroes. I took some time out during PAX West 2016 to see the new gameplay, and they’ve turned up the heat across the board.

The Fractured But Whole puts you in control of another New Kid, and this time you can play as either a boy or a girl. The demo dropped me inside Cartman’s house as the boy; I needed to find a passcode to get into Cartman’s locked basement. I headed towards Eric’s room, but the demo host had me take a quick detour to the bathroom first. Getting special poo power-ups in the game requires using “Total Ass Control,” which I used on the toilet. Moving the thumbsticks around, massive fart and poop noises flooded the headphones. This game pulls no punches. 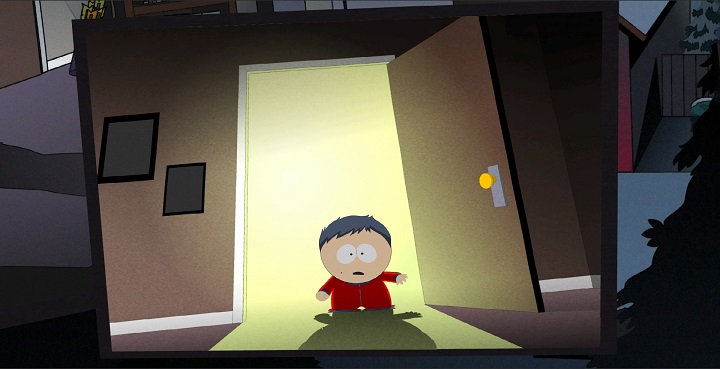 By the time I make my way to the basement, Cartman’s already hosting a meeting of “Coon and Friends.” As the New Kid I don’t have a superhero alter-ego yet, so I have to create one once I’m accepted as part of the team. This opens the character creation screen, with a varied list of hero types to choose from. For the demo, I have to choose the Speedster: a class like The Flash with speed-based abilities.

Cartman details the New Kid’s origin story, narrating the stages of the tutorial as I test out the new combat system and powers. Combat in Fractured But Whole depends on positioning: each character takes up a square on a grid, and each ability has its own range of effect. It’s just enough intricacy to keep combat from getting monotonous, but doesn’t feel overwhelming. The tutorial concludes with the end of the Speedster’s origin story: he busts into his mom’s room to see…his dad having sex with his mom.

This is a South Park game, after all.

The demo jumps to a street in South Park where I’m roaming around with Human Kite (Butters) and Super Craig in tow. Cartman tasks the group with reaching out to Netflix about securing better movie deals for Coon and Friends. Their rivals, the Freedom Pals, also want to build their franchises to make money as well. 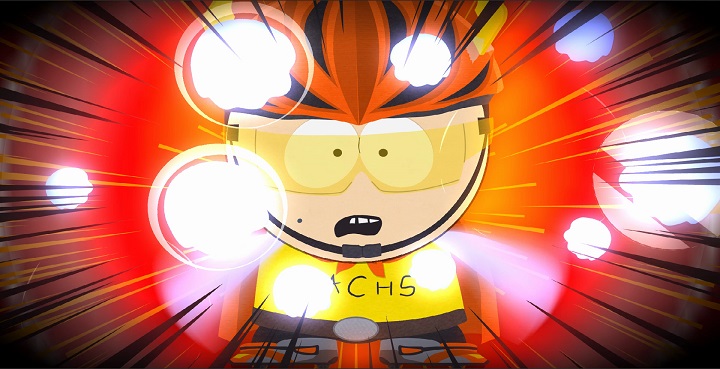 Roaming the town feels like the last game; you can walk up to bystanders and start conversations, or find items along the way. Our party encounters some of the Freedom Pals, led by Mysterion, Kenny’s alter-ego. Playing on the rift between heroes in Marvel’s Civil War arc, a brawl breaks out between the two squads, giving the first taste of full combat.

Like Stick of Truth, combat in The Fractured But Whole isn’t a cakewalk. Mysterion and his friends put up a strong fight, with Mysterion’s abilities doing heavy damage to my party. I almost lost the battle, with Token’s Tupper Ware taking out Craig and nearly KOing Butters. Luckily, the Speedster can use a power to increase his number of attacks, and the Human Kite summons electric attacks to take out the Freedom Pals. I just barely manage to use my ultimate ability to secure the winning blow, which felt rewarding. It’s nice to play a turn-based RPG that doesn’t feel like a mash-basic-attack fest; using abilities, healing items, and flanking helped me win out in the end.

South Park: The Fractured But Whole offered a short demo at PAX West, but enough of a taste to show that big changes are on the way. We’ll see how all the farting, swearing, superhero action turns out when the game releases on December 6 of this year for PS4, Xbox One, and PC..