Conquering Melee Combat for Glory in For Honor 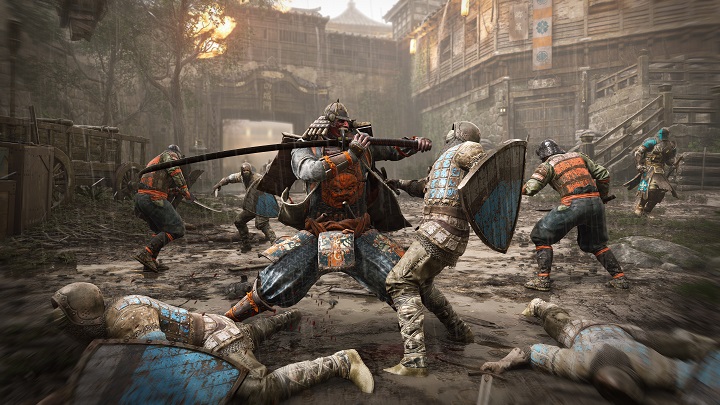 If there’s one benefit to Assassin’s Creed moving to a bi-yearly release cycle, it’s that it makes space to show off other games in the off-years. Ubisoft brought three titles to PAX West 2016 for press to get their hands on, including For Honor, the upcoming multiplayer title where players cross swords as Vikings, medieval knights, and Samurai to hold control of territory. I played multiple rounds of their 4v4 Objective mode, as well as the 1v1 Duel mode, and both games left me wanting plenty more.

Imagine playing Call of Duty with no guns: instead of setting up for long-distance sniper shots, slaying a rival requires getting right in their face, slashing them down blow by blow. For Honor takes the play style of a multiplayer FPS like Halo or Titanfall and forces players to adapt to a world where the sword rules. Combat is a fast-paced game of rock-paper-scissors: players use the right stick to choose to defend either left, right, or above.

Pressing an attack button while blocking initiates an attack from the same direction, so reading the opponent’s stance and indicators is critical to success. Once you’ve made a killing blow, you can either leave the opponent bleeding out, or execute a finisher to prevent them from being revived by allies. The formula becomes more complex with dodges, parrys, and a special Vengeance mode that powers you up after successfully blocking a large number of attacks, opening great punish opportunities.

Much like choosing a loadout in an FPS, we chose our character to ride into combat with before the match. We were only given three characters to choose from, a Vanguard-class version of the Samurai, Viking, and Knight. The Vanguard is the most well-rounded of the classes, though there will be six to choose from at full release.

Though I didn’t get the chance to fully try out each faction extensively, each one had different special abilities and advantages over the others: for instance, one wielded a bow-and-arrow which would help assist other players in combat when stationed at high vantage points. More so than other games, For Honor made me very conscious of the map and my placement on it. 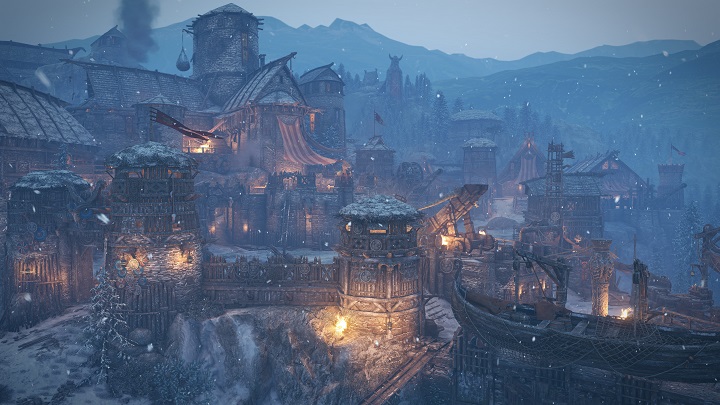 Both maps in our Objective demo took place at castle strongholds: one map was a single main lane with control points on either end and a giant pile of AI combatants at the one in the middle, while the other had a control point lofted above the fray of hectic combat, another control point directly in that combat, and a third point off in the distance. With no wall-running or double-jumping, positioning is key to keep yourself from being flanked by the enemy.

2v1 combat is almost surely a death sentence, so I spent far less time charging into battle, and more working my way around the battlefield, looking for opportunities to strike, and calling out to allies for assistance when I was in trouble. Fights may take a few seconds to resolve, particularly if players are guarding well, so asking for the right ally to come to your aid can actually save your life and turn the tide of battle. I saw this first-hand over the course of our two Objective matches.

The 4v4 mode, Objective, is a race to 1000 points. Teams secure points by killing enemy players, AI-controlled grunt troops, and securing one of the three objective locations on the map. Securing an objective provides a 100-point boost to the team, but only for as long as they hold the point: if the other team captures the zone, then they take the 100-point boost for themselves. Once one team reaches 1,000 points, the opponents enter into Breaking mode, where they no longer respawn after death. The first team to reach 1,000 points and eliminate the enemy team’s players wins. 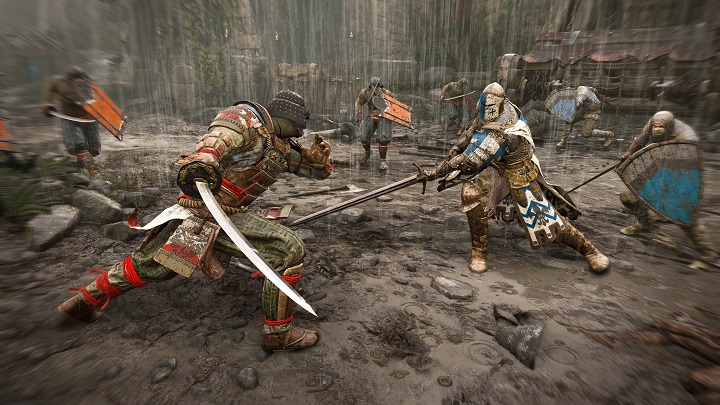 Objective mode’s design leaves space for some excellent Tug of War-like battles. In one match I played, our team was losing by 300 points when the opponents reached 1,000. Our team rallied together and captured Zone A, subtracting 100 points from the enemy team and allowing us to respawn again. We fought back to the point where we got 1,000 points and Broke them, but by that point they’d already scored enough points in grunt kills and player kills to break 1,000 by only capturing one zone back. They routed us quickly afterwards, but the tension still felt fun and intense. Most capture games rely heavily on zone capture time, making it nearly impossible to come back from large deficits, but leaving 300 points continually up for grabs makes the gameplay more dynamic and encourages new, risky tactics.

Duel, in contrast, is a 1v1 fight to the death with no items or tricks. Duel’s benefit is that it’s far less frantic than Objective; when in the heat of a crowded battlefield, it becomes really difficult to block enemy attacks simply because you can’t quite tell where they’re coming from. Duel stretches out some of the hack-and-slash into methodical strategy, using the world around you to your advantage. One duel location in particular was positioned near the edge of a castle parapet overlooking a cliff; I hoped I could force my opponent near the edge, then push him over it, but I secured the kill before I could test my plan.

Overall, For Honor really impressed me with its simple-yet-complex combat and gorgeous locations. Though it’s hard to keep up with the pace of combat in crowds, I expect that it’s part of the intention: some players will want to ambush foes in the mix so that they’re harder to defend against, while others may try to fight in open spaces to sustain combat or provide openings for flanking. The game also has Feats, the For Honor-equivalent to Killstreaks, but I didn’t get the chance to use any over the course of gameplay. I’m excited to see what else the game has in store in terms of its extra character options and single-player campaign; we’ll find out more when the game drops on February 14th, 2017.