DISCLAIMER: Josh Boykin backed this game on Kickstarter in April 2013.

It’s been years since the $20 I put into inXile’s hands was supposed to turn into Torment: Tides of Numenera, but the project’s become a wholly different beast since that time. Originally shooting for a $900,000 target, the game funded to the tune of nearly $4.2 million. Now, nearly four years and $5+ million later, the spiritual successor to Planescape: Torment feels like an off-the-wall sandbox unlike any I’ve ever played in. During PAX West I sat down with Colin McComb and George Ziets, the Creative Lead and Lead Area Designer, respectively, to learn more about where the game currently stands. 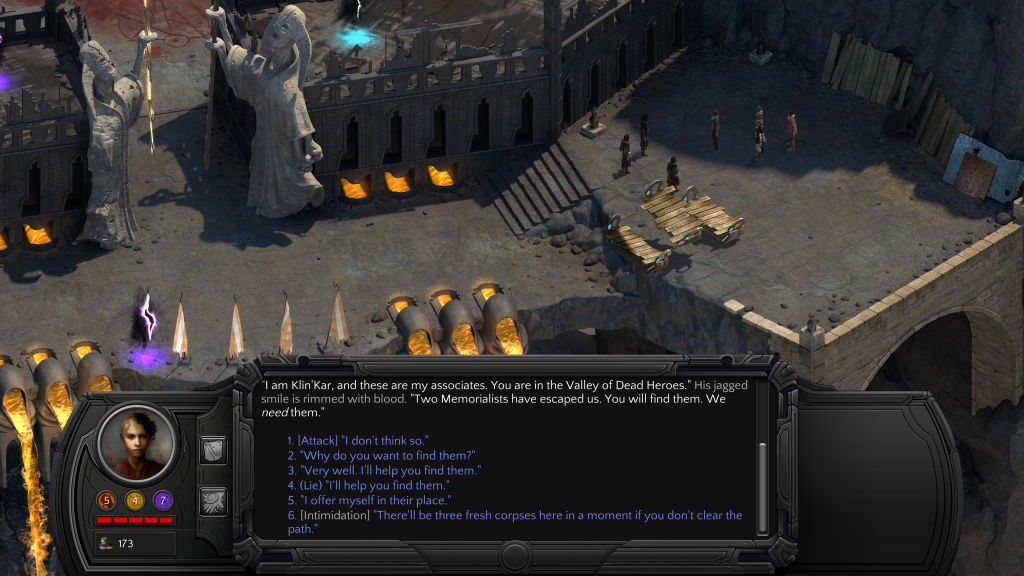 Torment: Tides of Numenera isn’t an open-world RPG, but the possibilities feel endless for exploration. You take on the role of a Castoff, one of the discarded bodies of a powerful wizard who transfers his consciousness from host to host. When he departs from a body, a new consciousness develops in his stead, and you take on the role of one of those beings…as it plummets to the ground from thousands of feet in the air. From the very beginning, you’re presented with multiple choices to influence the game’s progression, and can actually even end the game in roughly three choices (I know, I did it myself).

If you fall without utterly splattering yourself, you begin the game proper, journeying through the game’s four zones to stop The Sorrow, a creature which just destroyed the moon that held all of your creator’s memories. Moons etched with memories and inter-dimensional monsters are just a slice of Tides of Numenera; it turns out that Earth one billion years in the future is a whole lot more interesting than we might have thought.

Earth, circa 1,000,002,016 AD is unrecognizable by today’s standards. It’s a world infused by technology we’d refer to as magic today, with all sorts of absurd scenarios that show as a result. Tools exist to keep the sun from burning out, save humanity from climate change, and expand the abilities of humanity far beyond anything we’d have today. One of the zones Colin and George showed me is called “the Bloom,” an “interdimensional organ beast” so huge that people actually live within its being, using its maws as portals to other realms through space and time. The party needs to find their way through one maw in particular to continue their quest, so they have the option to:

Colin and George choose option D) pull out a Transdimensional Scalpel that’s specifically effective at cutting the flesh of the Bloom, tearing a hole through it instead. Though I don’t get to witness the consequences, they say that harming the Bloom like that will have dangerous consequences downstream. I can’t help but believe that slicing my way through the maw of an interdimensional organ beast would at least somehow hurt me later on.

The next area, a ship called the Lost Anchorage, gives them a chance to show off the combat and skill system of the game. It also showcases the varied backdrops of the game; where the Bloom felt dark and somewhat cyberpunk, the Lost Anchorage was bright and layered in gold and other metals. George drew heavily from Gilded Age ships like the Titanic for the inspiration for the Lost Anchorage, and the contrast to the other areas feels instantly apparent, even though it still fits. Regardless, there’s was a heavily-guarded item the party needed to take, so they began one of the game’s many “crisis events.” 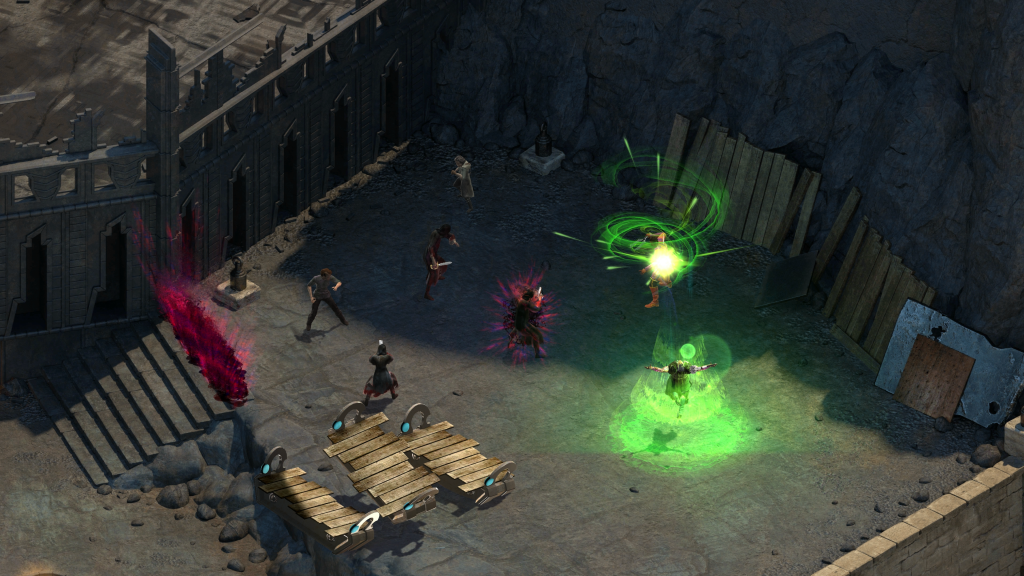 Combat and crisis negotiation in Tides of Numanera revolves around using skill points: each character has specific abilities that make them better at combat, discussion, and so on. Any time a character performs a task, whether they’re casting a spell or talking their way into/out of trouble, they can increase their odds of success by pumping energy into the task. Should you happen to die, it’s not the end of the world, though: death is a part of the game as well, and as your body stitches itself back together (like after you fall from the sky at the beginning), your soul journeys through a mystical labrynth to uncover information about yourself and the other Castoffs in the world. It sounds like a sprawling game, but in a controlled, interesting way.

Most games this open-ended would generally turn me off, but Tides of Numanera centers storytelling at its heart. There’s over a million words packed into the game’s dialogue, and McComb actually wore a wrist brace to work due to all the time he spent writing. The game carries a linear arc that moves forward as you advance through the four zones, but within each of those zones there are tons of different characters, items, and events that change the game’s direction.

Instead of a binary alignment system (think Mass Effect’s Paragon/Renegade alignment, or Knights of the Old Republic’s Jedi/Sith scale), each character’s alignment is mapped through five Tides that shift with the actions you take in the game. For example, a high red tide means that your character is very passionate and creative, while a strong gold tide means your character is giving and empathetic. All of this story is guided by a central narrative question: “What does one life matter?” 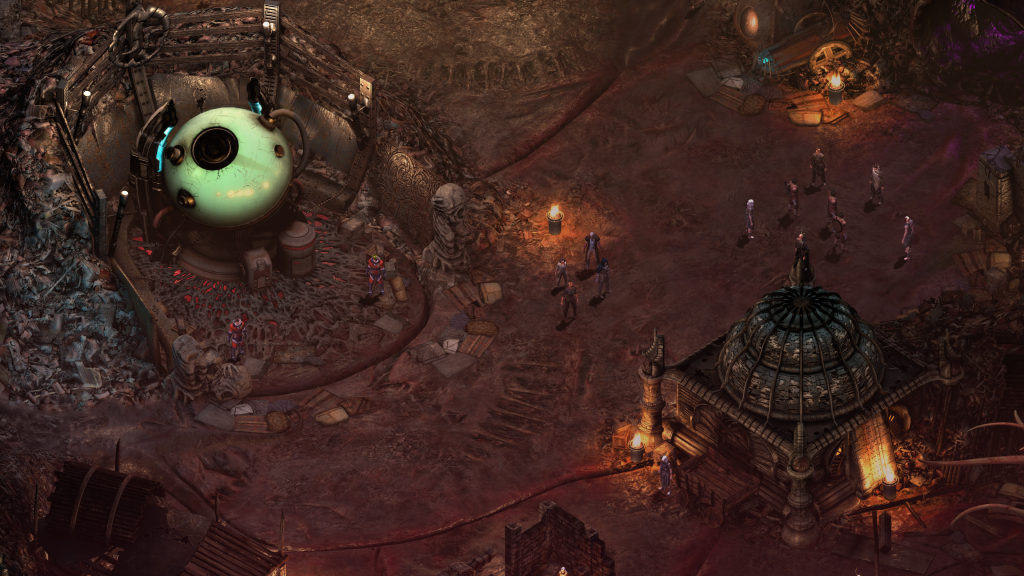 Checking out the game’s Kickstarter page, it’s evident that not all fans are excited about Tides of Numanera in its current state. Some have asked questions about the inXile team’s communication with the community, and, of course, there’s dissatisfaction with the time delay. Though the project started as an independent one, inXile is now working with Techland Publishing to bring the title to Xbox One and Playstation 4, a process they say has only shown up recently in the project’s development, and is being fully funded by Techland. Now, with over 94,000 pledges and a pledged budget of over $5 million, the stakes are certainly high for the developer and publisher alike. Thus far, I’ve really enjoyed what I’ve seen, though I had to leave before I really had time to dive into the world myself. Still, I’m looking forward to exploring Numanera myself in the future after a brief look into the Bloom and beyond.

Torment: Tides of Numanera is currently available on Steam in Early Access. The game is slated for full release on PC, XBox One, and PS4 in Q1 2017. Learn more about the game at tormentrpg.com.