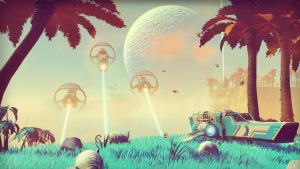 Ever since it was first shown, No Man’s Sky captured the attention of most. After all, who didn’t want to pilot a ship around to explore millions of planets, discovering new life and plants with friends?

As time went on from that initial video, questions started being raised. What would the gameplay consist of? Why should people keep moving forward? Would there really be other people to meet, especially since gameplay had been single player?

Now, we’ve seen that No Man’s Sky is actually a shell of a game that could’ve been vastly interesting. Unfortunately, the more you dig into that shell, the more that you’ll realize it’s hollow inside.

Players are dropped onto a random planet with no clue of what has happened or what’s going on. On instinct, you start harvesting trees and rocks nearby to get material, learn that materials power your suit to keep you alive, your gun used to harvest items and attack and your ship. Eventually, you get enough materials to power your ship to blast off the original planet, travel to another planet and repeat. 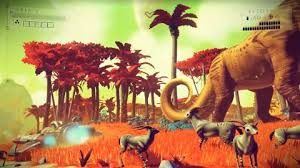 Occasionally, you may find a space station with items or ships to purchase, but most of the time you’ll just spend jumping from planet to planet, either getting closer to the center of the universe, finding a person hidden in the galaxy or following orders by Atlas.

The biggest draw to the game still has to be its vastness of planets. By using voxels instead of polygons, the game can generate unique planets continuously, with slightly different planets, animals, mountains, oceans and more. Then, it generates random colors, environmental hazards sometimes and there’s your planet.

However, after you visit a few planets, you’ll start noticing that the game can only do so much to make everything unique. Animals look all too similar, and most either scurry away before you can get close or randomly attack, forcing you to engage in combat in a game that has controls ill-suited to fight with enemies that don’t drop materials when killed. Trees and rocks change slightly, but all contain mostly the same materials. Even the environmental hazards just start cycling the more you explore. 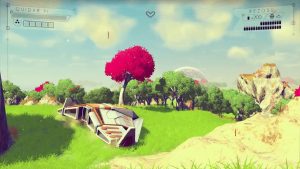 So, what’s to make you want to keep coming back? Well, if resource gathering again and again doesn’t sound riveting to you, there won’t be much to keep you here. That is the main goal of each world: find more items to store and refill your ship, maybe find a few alien artifacts that teach you a word or can give you an upgrade then move on to the next planet.

Storage also presents another issue. Both your bag and ship has a small amount of storage space, with upgrades taking up space that could have been used for materials instead. Sure, you can upgrade storage, but the cost may turn some away as they gather other materials to sell to get enough credit for the next biggest bag.

That’s really all there is to do in the game. You can farm resources to buy the best bag, ship and weapon, complete milestones the game has and wander to the end goals, but there’s not much else going on. Unless you really like mining resource after resource, you probably will get burned out long before you find the center of the universe. 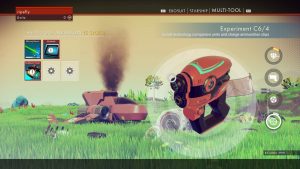 Now to mention the biggest missing feature for a game like this: multiplayer. The repetitive mining could have been forgiven if you could have joined in with friends or random players to form small armadas or discover worlds together. However, you’ll find out that you’re alone in the universe, with plenty to explore but no one to meet except a few NPCs.

No Man’s Sky may be fun to explore for a while, but the façade soon wears off and shows how repetitive of a title it truly is. If you want to see what coding can do to produce unique worlds, then check it out. However, there are other resource mining survival games out there that are worth your time.