Virtual Reality is still finding its footing in the mainstream world, though not because it hasn’t caught on. There’s a ton of interest in VR games, and it continues to be a new avenue that developers and publishers show interest in. Though it has a lot of interest, the fact that there are several different types of VR headsets means that it isn’t a universal platform yet. Despite this, NUX Studios, a new developer from Stockholm, Sweden, aims to change that with their new game, Wands. Though designed with multiple platforms in mind, the game will make it’s debut on the Oculus powered Samsung Gear VR.

Before getting to the actual game, there is the matter of what it will actually accomplish. NUX Studios wanted to make a competitive game for mobile VR headsets that could be adapted to other VR units in the future. While the competitive aspect isn’t exactly new, one feature that NUX Studios implemented in the game is definitely a first that will make it a shining example. Using some awesome engineering, Wands will likely be the first competitive VR game to have a live spectator mode to watch the two competitors in-game. The spectator mode can be accessed from just about any web-based device and offers a splitscreen view or even individual camera views. breaking lots of new ground in the VR industry. 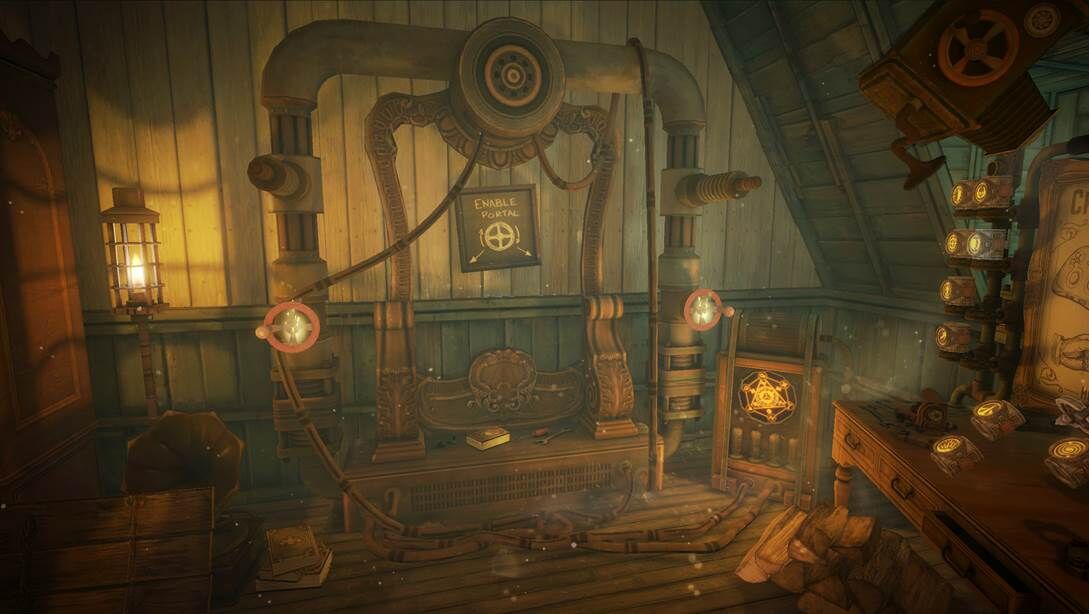 Getting to the actual game itself, Wands is a magic dueling game set in the 19th century with a steampunk atmosphere. Given a simple yet somewhat deep set of tools, players can forge their wands using special relics that grant them powers. Up to four magic spells can be formed into a wand and the pieces can be changed anytime outside of a duel. Players can practice the abilities in their workshop training facility and see what works best for them, though the way the game works, players will be encouraged to change up their wand for unpredictable match ups.

The controls are simple, being preset for optional platforms (even ones that may include head-tracking) as it really only requires a couple of buttons and complete freedom of movement. It is recommended that the player have some space to move around, as the enemy could easily be in any direction depending on the map and it can be easy to potentially hit something near you. Given a controller, or even just using the Samsung Gear VR side button, players can look at their spells and select the one they want active. Holding down the spell button readies the spell to be aimed in whatever direction the player wishes, though certain spells can only be aimed in certain areas. It’s a pretty basic control scheme, but as mentioned earlier, it makes it adaptable for other platforms and controllers, perhaps even controllers made specifically for the game at some point. 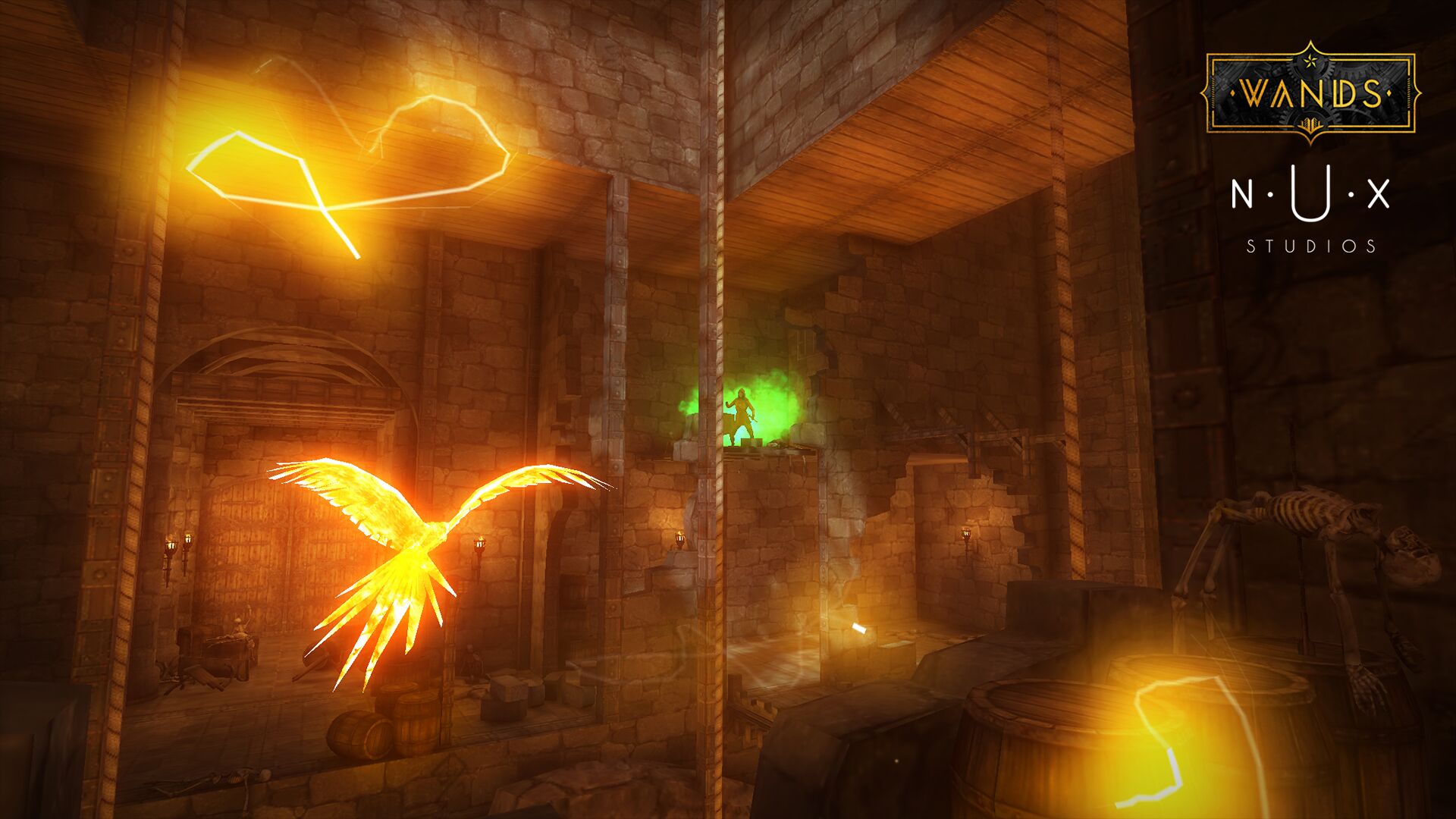 Some spells work in an offensive nature, using abilities like Acid Cloud, which places a cloud of poison over a tile where a player might travel. A player may also use the Stone Demon, which sets up an acid-spitting statue on a tile, making for a formidable obstacle for opponents. Then there are the defensive spells, ones that can protect you and prevent a dangerous situation. Spells like the Devil’s Twins, an ability that places two copies of your character in other spots, makes for a good tactic, as an opponent’s attacks will reflect off the copies and right back at them. There are even abilities that work to immobilize your opponent, working more like a trap ability.

Players are given a health gauge as well as a mana gauge, which will deplete and refill as spells are used. It can sometimes be a bit difficult to manage the health bar, as players are often focused on attacking their opponent, though the game does a good job to let the player know they’re near death with a heartbeat sound. There are health vials placed on various tiles that will be consumed when focused on, so it would be smart to remember the locations to stay alive. 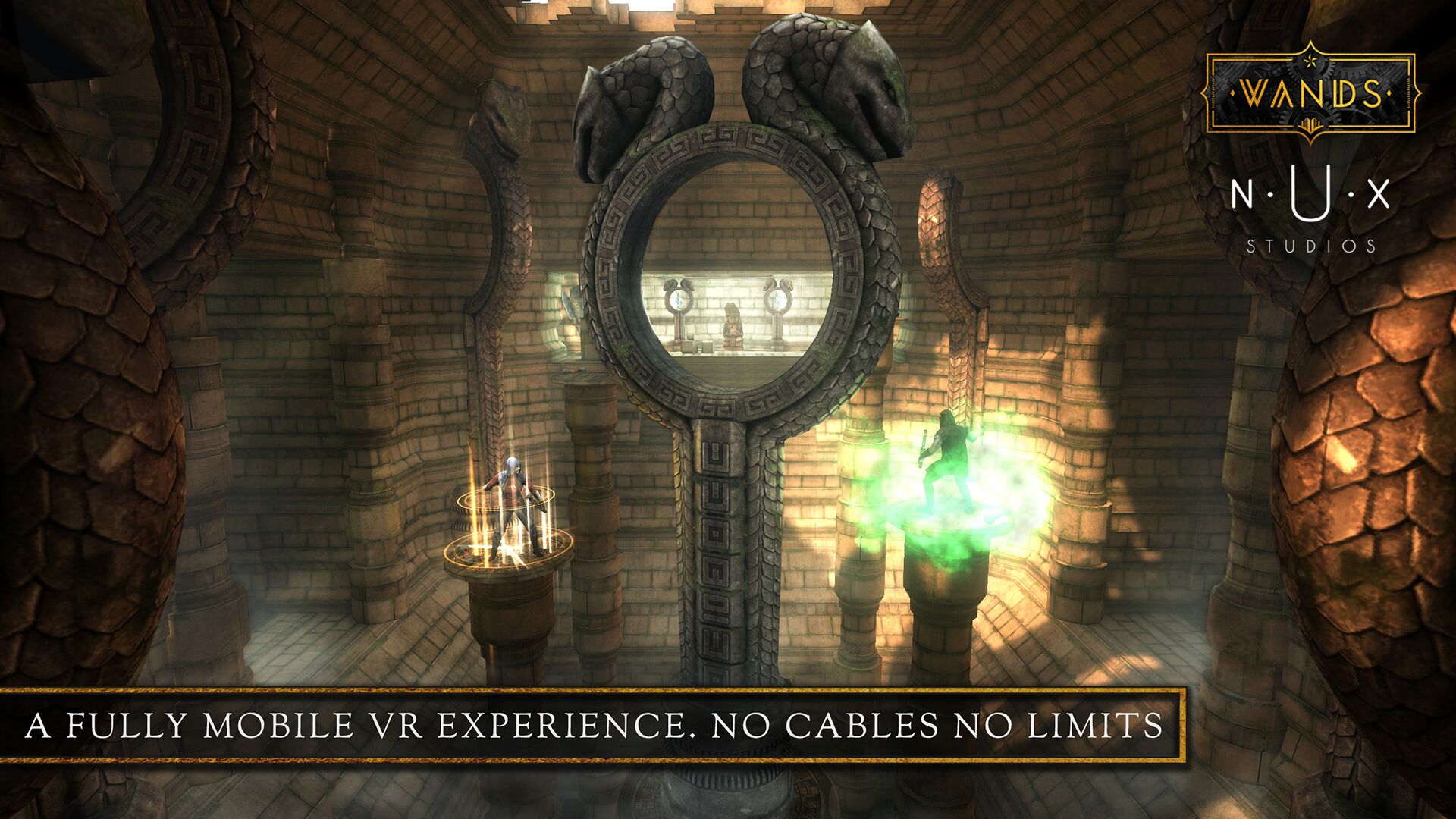 Monitoring mana is also somewhat crucial, as certain spells will take up a set amount of mana and even teleporting from tile to tile takes up the valuable resource. This means that it can be a gamble to use a powerful spell like Stone Demon, as it will likely leave you stranded on your tile for a good few seconds. While it might not sound like it, a few seconds is all an opponent needs to deal a good amount of damage if they have the right spell equipped. Sometimes it may be best to use spells that don’t use a lot of mana so that a player can be efficient with their spell usage and mana consumption. In the preview build, there was no indicator as to how much mana would be used for each spell, though the team is aware of the omission and will likely amend that feature in if they haven’t already.

Getting to the stages, there are currently three maps, all very unique in their own way. Temple of Ophidian is an Aztec temple-inspired stage that features a large rotating ring made from stone in the center as well as a stone aesthetic. This ring is capable of blocking certain spells, so it brings a timing mechanic to the duels, making it so players have to make sure they don’t cast their spell right into the obstacle. It has a sort of cross shape to the stage layout, with four tiles to stand on near the center ring, and four tiles set away from the ring in different directions. 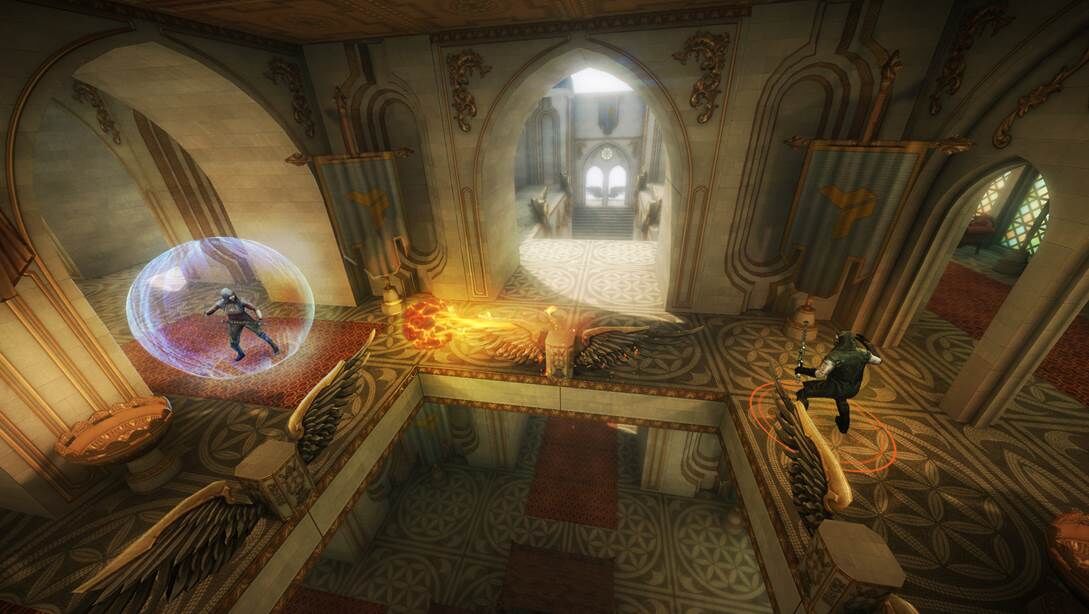 The Celestial Halls are much different, as this stage is a two-storied map that has a much cleaner atmosphere. With stained glass windows and golden decor, it makes for a rather beautiful setting for a duel. This map is much more open and lacks a real obstacle, though given that it has two levels, it can make for a good map to evade opposing players. Even though the different floors are open, it does make it difficult for someone to hit a player directly beneath them on a separate floor, so the map makes for a nice change of pace.

The third map is the Aspis Prison, a dungeon-like environment with several skeletons and chains to show evidence of the many lives that suffered in the prison. This stage has several tiles in various nooks and crannies, both high and low, making for a varied map to battle in. There is even a moving platform that players can use as a good way to keep moving without using mana, maintaining a good defense. Though it is only three maps, Wands already has a good variety of stages to duel on, each having various strategies and spell combinations that will work well for them. 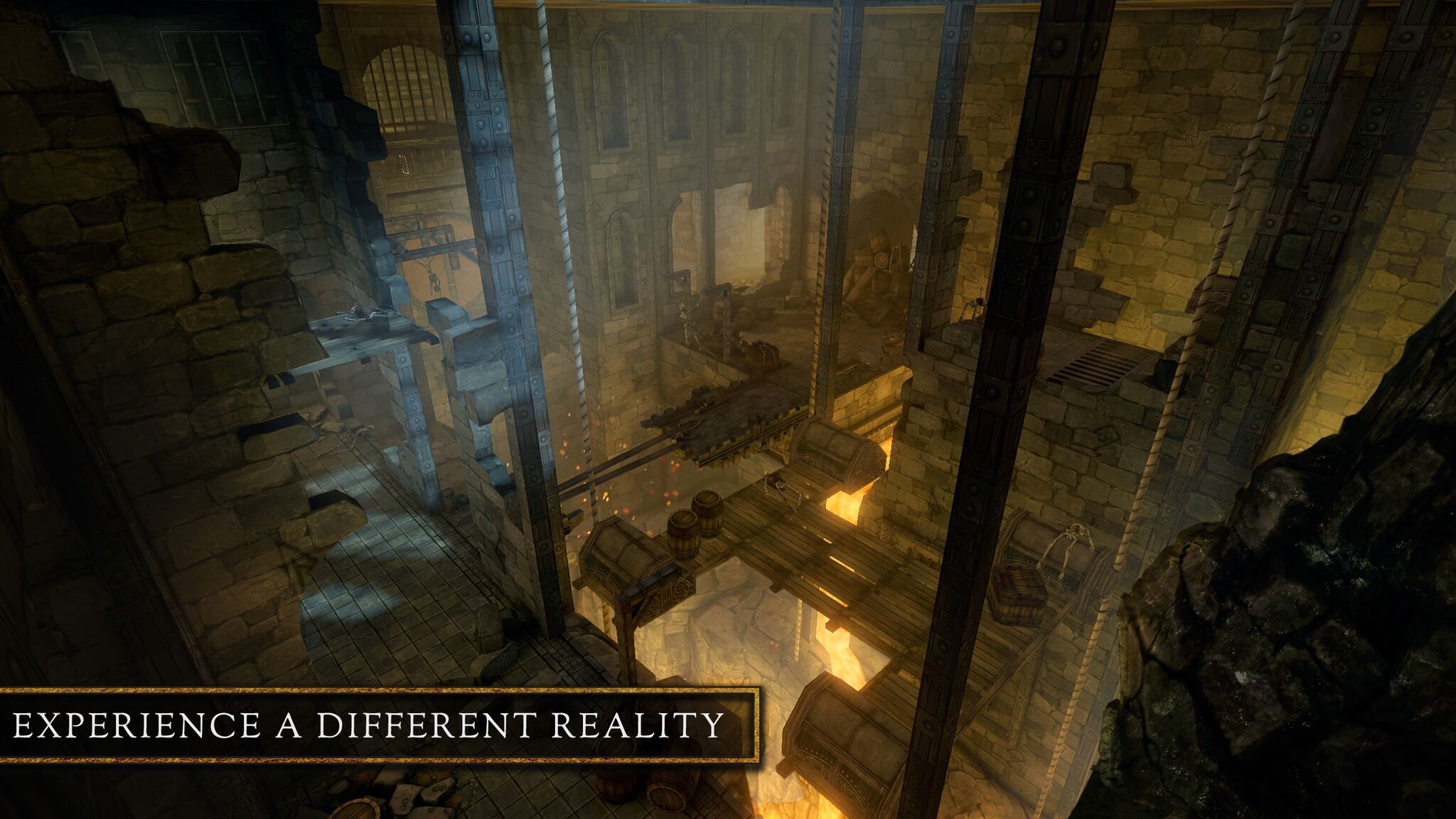 Once players gain mastery of the stages, they can use the knowledge to win matches, gain currency, and earn new spells to use with their wands. During all this time, they will be able to rise through the ranks on the leaderboard, another popular competitive aspect that will likely have players dueling for supremacy. It is unclear just how many things have to be unlocked based on the demo, since everything was already unlocked, but it is nice to see a progression system in a game like this, making players feel like they accomplished something with their victories.

Even though it wasn’t in my demo, I was told that there was a little single player content that worked as a sort of tutorial. Though the game only has a little content, there may be room to grow and add more content as the game gains popularity. The tutorial supposedly even contains the Inquisitor character, who can be unlocked as a playable character to use in duels by leveling up. It was even mentioned that a tournament mode might be included at a later date, so it’s clear that NUX Studios has different ideas to keep the game interesting for their players. NUX Studios plans on releasing Wands later today on the Oculus store for the Samsung Gear VR, with a planned multiplatform release later in the year.