I was hesitant on Lego Star Wars: The Force Awakens. Previous Lego games had either focused on three movies or an entire series. 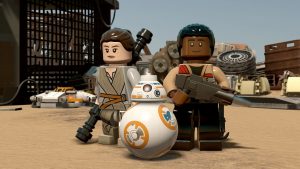 Now, we had an entire game trying to focus on one movie. While Traveller’s Tales did what they could to try and make up for the lack of content, this Lego title still may only be of interest to just diehard Star Wars fans.

The game starts with an odd point. Instead of going with the opening act of The Force Awakens, it actually goes with the Battle of Endor, which we’ve played before. It’s about a 30 minute mission that shows off the new cover based mechanic and an area you already know. After that the game jumps ahead to Poe and the current movie, it’s just an odd starting point.

To make up for focusing on just one movie, the game adds a lot of backstory in that series fans will be interested. PS4 gamers will be able to see why C3PO got his red arm, and everyone can see additional stories like Han and Chewbacca searching for the Rathars, among other stories. 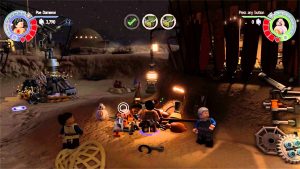 Another thing to expect here are the voices from the original cast. The voice acting is fun and allows for the jokes to come off just a bit better by hearing them said by the original actors. And, considering this is a Lego title, expect plenty of visual jokes, quips back and forth between characters and more.

As for the gameplay, it shouldn’t surprise you when I say it’s a Lego title. Sure, they’ve added the ability to take cover, so you can dodge incoming fire and time your shots back to take out enemies and hit some trigger areas. Otherwise, it’s the standard shoot/hit things to collect studs to buy characters/vehicles/upgrades. Mix in some building locations where you can use a group of bricks to build multiple contraptions to solve puzzles and get hidden items and you have the game in a nutshell.

Lego Star Wars: The Force Awakens is still very much a family game. It’s simplistic to pick up and play, and death really means nothing besides losing some studs and starting from where you died. While we once again don’t have online multiplayer, the couch co-op is fun like usual and can let you get through areas quicker than relying on the lackluster AI.

Star Wars fans and Lego fans will no doubt find plenty here to enjoy and go for 100 percent competition. For everyone else, it’s still a fun little time waster, but don’t expect The Force Awakens to change your mind about the Lego game series.