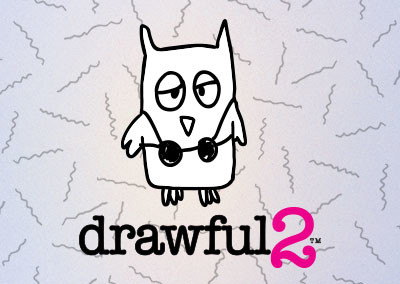 Jackbox Games has had a huge success with their party packs.

One of the standout titles to play with friends on mobile devices had to be Drawful, where friends could trace out a hint to show everyone how terrible their mobile drawings are, allowing for plenty of laughs and interesting drawing titles. 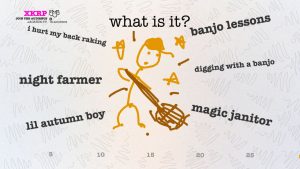 Now, we have the standalone title for $9.99, Drawful 2. The core of the game is still identical. Everyone gets a prompt they have to draw. After sketching out the phrase, other players write in what they think the artwork is before trying to guess what the correct title actually is.

After guessing the title, you can vote for your favorite titles, meaning even people who are there just to get a laugh can get the thumbs-up trophy at the end, letting their jokes not be in vain.

Keep in mind that there is no eraser. The game doesn’t care if you screw up, and neither should you. It’s stupid fun, and extra lines or messed up original drawings scribbled out only add to that fun.

New to the sequel is a second color, normally just a variation of your original color. Still, it can help lead to some added depth in some drawings, or at least more laughs. After all, drawing a sky with red and pink, or a pumpkin with blue and teal, is no small task. 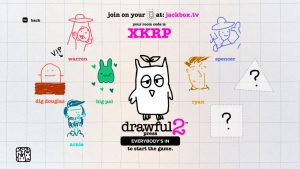 A big new feature is the ability to create your own episodes. They can either be made and saved for use later, or created on the spot with friends. For those that spend a lot of time in the game, this is great to create prompts based on personal jokes or references that only your group may get.

Jackbox Games also added some new Twitch features as well. While it supports up to eight drawers, up to 10,000 people can vote on their favorite answer, making this perfect for streams. Plus, you can censor offensive images and answers, and force people to log into Twitch to try and keep trolls away.

A few other small additions made it to the game as well. Accidently closing a browser or backing off of jackbox.tv no longer permanently kicks you out if you try to relog back in. If you get multiple correct answers, you’ll get a streak bonus as well. Plus, there’s plenty more prompts to check out.

Overall, Drawful 2 feels more like an expansion than a true sequel, with some additions but gameplay relatively unchanged. However, if you have friends over quite a bit, you’ll still find plenty of entertainment value here, with being able to create your own prompts worth $10 alone. Just get ready to kick back and laugh as you see your terrible art next to everyone else’s terrible art.