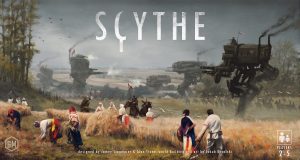 Stonemaier Games’ Scythe may be one of the best tested games that I’ve run across in a while.

Based on a universe drawn by Jakub Rozalski, Scythe lets players take control of one of five countries and jobs to try and build and harvest enough to come out on top at the end. While the giant mechs are featured on the cover and used in the game, make no mistake about it, this is a resource game.

During our playthrough of Scythe, fighting was seldom done. In our five player game, only five total fights happened during the game, three of which featured me (I’ll explain more why that was later).

There may be a lot of pieces to take in at first, but the board itself, as big as it is, is easy to set up. It’s best to just blind mix the faction mats and job mats and pass them out, as each one features different strengths and weaknesses, allowing for quite a few combinations before you experience it all.

During my playthrough, I was an Industrial Saxony Empire, which worked great. The Saxons have an ability that they can get more than two victory points from fighting and can also score both of their initial goal cards, and the industry card allows for cheaper mech building if you upgrade early. 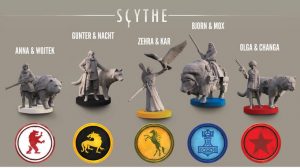 This combo led to a play style of hiring minimal workers (thanks to one of my goal cards) while pushing mechs out quick to hide in tunnels and attack (giving me an attack bonus). However, change either the faction sheet or job sheet and you could have an entirely different plan due to a different play style.

Each faction has an ability that can be unlocked as you summon a mech, as well as an overall faction ability, such as workers being able to cross water or choosing two options from an encounter card. All are beneficial depending on your strategy of play, but also alter how you may play one class over another.

The job sheet shows you what you can do each turn. After moving your token to a different space at the start of the round, you can then take the top action first, such as moving workers, mechs or your captain, trading coin for items, bolstering your attack power or producing on your spaces on the board.

After doing the top action, you can then do the bottom action by paying resources if you want to, which can upgrade your board, build buildings or mechs, or enlist, which can give you a bonus each time a person next to you uses the bottom ability.

The resources are a bit different than normal resource gathering games. When you produce, you don’t personally gain the resources, they just stockpile on the hex. So, if you get chased or beaten off a spot, another player can gain that pile of iron you’ve been piling to summon a mech. Resources can be transferred via mech to a new spot (mechs can also move workers) so that you don’t lose them, but having a mech be defeated in a fight will leave those resources for another player to take and use.

Each hex on the board has one of five things that can be produced: iron, wood, oil, grain and other people. Many also come with encounter tokens, which let you draw a card to use an action if your captain lands there. The action can be small (bolster and gain a popularity) to large (pay four coins to summon a mech). It’s up to you which of the three actions you’ll take, and if you’ll take all of the advantages or not.

I should also mention the middle spot, the factory. If you get your captain here, you can look at the factory cards available to choose a fifth action you can choose from each round. These are often very beneficial actions, all of which have a bottom action of letting a unit move two spaces (three if you have that mech ability unlocked). The top action usually have you pay something, like popularity, money, combat cards or bolster points, to build for free and do something else. For instance, I could pay two coins to enlist a space and bolster, a great combo for my fighters.

Now, let’s talk about the risk/reward that fighting can be. If you win a fight, you can gain the space, getting resources there and pushing opponents away. However, if a worker is on the space and gets chased away, your popularity drops for basically being a bully. The popularity is used in end game scoring for additional coins for certain goals. So, it really pays to selectively choose your battles and when to run from them.

If you get into a fight, each player gets a spinner and risks bolster points they have (up to seven) and a combat card booster for each unit on that space. The winner stays while the loser moves back to their base and draws a combat card if they wagered at least one point.

What may be the biggest drawback for the title is just the pace of the game. You get only one action a turn (two if you do the bottom) and you can’t repeat it unless you have a certain faction. This draws the game out, especially as you plan two-three moves out but have to wait 10 minutes to accomplish them.

Stonemaier Games at least recognized this drag and suggests that the next player start their first move while the previous player does their bottom action. As mentioned at the top, the playtesting and instructions for Scythe are great. Any questions or clarifications we needed were perfectly detailed in the instructions, meaning others had ran into it before and had taken care of it. A lot of games leave vague miniscule questions, but we never had that loophole option here.

The team also took into account that you may not have a group always available for the game, and created Automa mode. The mode features a deck of cards that breaks down the AI’s move each turn. While I haven’t been able to test this mode myself yet, I’ve heard it can be a good introduction to the game and give you a chance to try new strategies out.

Overall, Scythe’s beautiful world plays amazingly. The polish and fine tuning was easily seen during our two hour play session, and we walked away already talking about new strategies and ideas for next time. If you come in expecting a war game, you’ll be sorely disappointed. However, if you’re a fan of resource games, this is definitely the must-have title for you this year.