RTS (Real Time Strategy) and MOBA (Multiplayer Online Battle Arena) games are definitely no stranger to the world of eSports, with popular titles like StarCraft II and League of Legends taking center stage on the competitive scene. Despite this, there are still a lot of elements in these games that don’t typically apply to the traditional basics of actual sports. Sparkypants Studios, a fairly new developer with lots of experienced talent, saw this and decided to take the opportunity to try and change that with Dropzone. Combining elements of the MOBA and RTS genres, Dropzone is a one-on-one game made with simple rules that make it resemble an actual sport. Players utilize giant mech vehicles to take down an alien race known as the Kavash, with the main goal of trying to score more points than the opposing player. 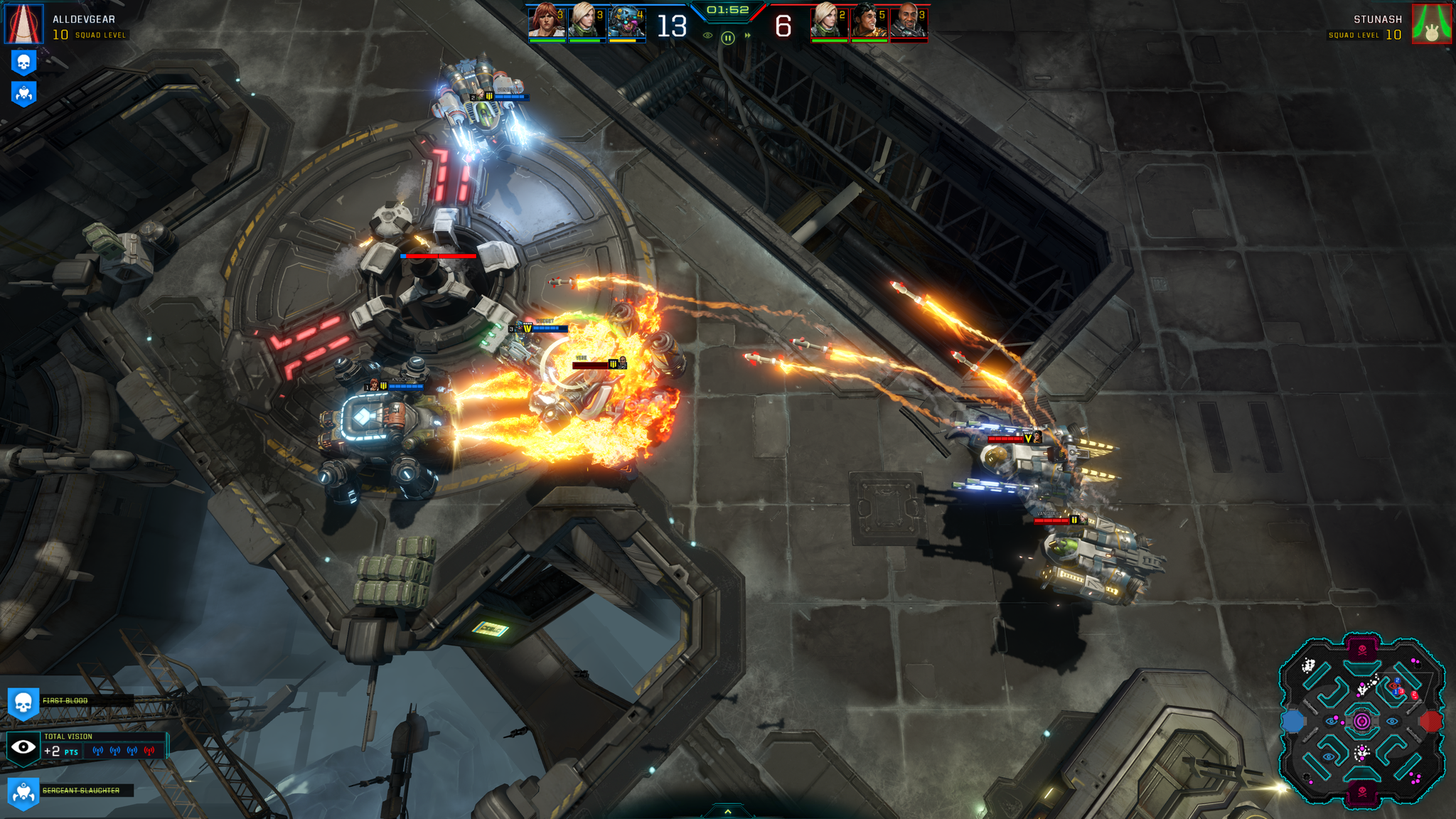 Starting with the basics of the game, the players will pick three hero units: a gunner, a mechanic, and a tank. Players will control all three of the characters at the same time like a typical RTS game, though all three contribute to the match in ways that make them essential components. The gunner is the attacker, dealing damage to enemy units and utilizing their speed to claim objectives. The mechanic is the support class, repairing units from damage and using special abilities to boost them in the process. The tank is a slow unit but it makes up for this weakness with area of effect attacks and high defense to soak up enemy attacks. Even though each class has a handful of characters to choose from, players can further personalize their team by customizing their units before the match, using different weapon and body types to suit whichever playstyle fits.

Aside from customizing rigs and choosing characters, just before a match, three missions will be detailed. Missions are selected at random and both players are eligible to complete them, though only to the first person to do so gets rewarded, adding another competitive aspect. Depending on the difficulty of the mission, it can earn more points than others, so it would be ideal to go for the missions that earn the most points. One example would be the Alpha Strike mission, tasking a player to eliminate nine Kavash Alphas before the other player, scoring four points. In contrast, the Eliminate mission tasks players with eliminating 60 Kavash units, giving only one point. Another good mission to take on is the Total Vision mission, which requires a player to control all the vision towers on the map, which also reveals part of the map to the player controlling it. 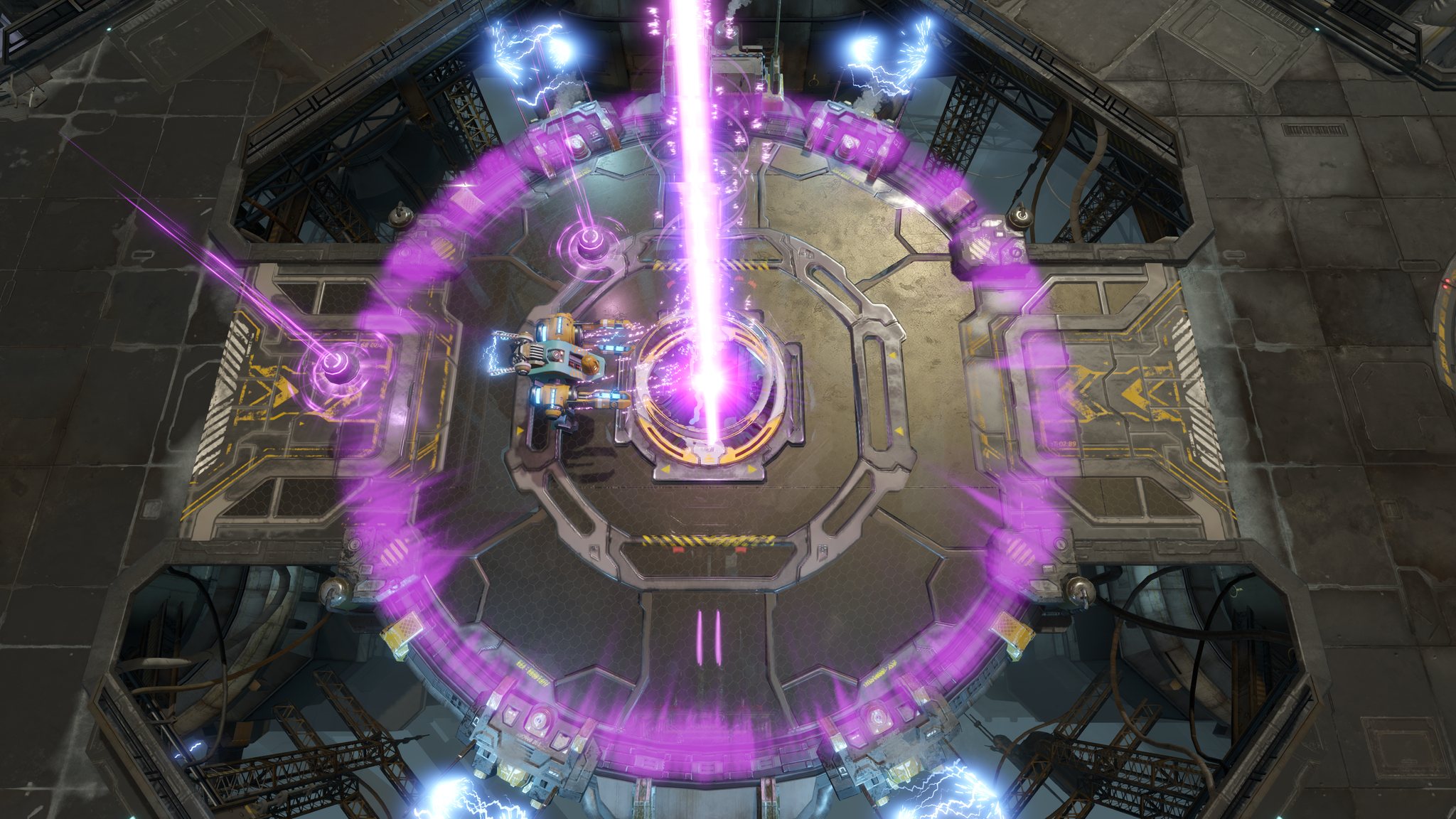 One of the main things Sparkypants Studios wanted to do was implement a time limit, as players will have 15 minutes to score as many points as they can. In the event of a tie, the player that completed the most of the three missions receives the win, which makes the missions rather important for players to focus on. During the match, as players battle each other or the Kavash aliens, they’ll gain experience and level up, gaining stronger abilities and stats, giving more of a MOBA element to the RTS gameplay. Each player has a safe zone in their spawn point but victory can only be obtained from activity around the map. Defeating enemy Kavash will earn cores that can be uplinked in the center of the map, being the main source of points in the game. Enemy players can try to steal cores as well, as players cannot attack during the uplink, meaning they’ll have to use their other units to protect the one delivering the core, making strategic timing a strong aspect.

The 15 minute time limit really sets the game apart from other RTS and MOBA titles, as most of those games may have a time limit for certain objectives, but nothing set for the entire match. Because those games don’t have a time limit, the matches can go on for an extensive amount of time, but given the set time restriction in Dropzone, it stays at a comfortable length. Given the way that players collect cores and take them to the uplink, it feels somewhat comparable to taking a ball to a goal, truly bringing the sports comparisons to light. It’s a good call to emphasize a sports system for a game like this, especially given just how popular eSports are becoming, as these simple features really add a new level of competition to the strategy and skill of the game. Perhaps best of all, is the level of accessibility to the game, making it so practically anyone could jump in and understand the rules of the game. 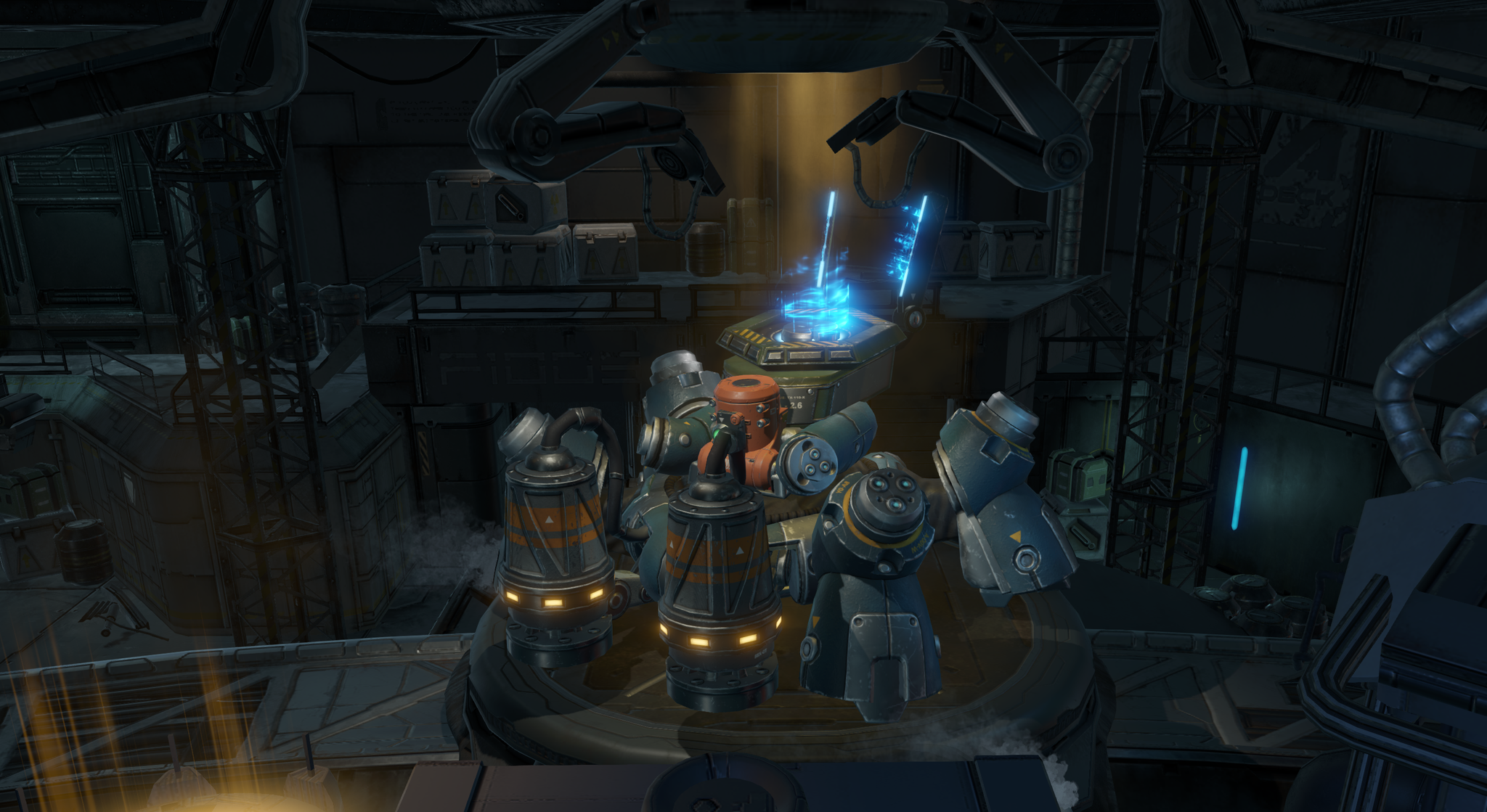 The presentation of Dropzone is a standout feature, given a lot of attention that smaller games sometimes tend to ignore. All the characters are voiced with several lines of dialogue to respond to their “commander”, AKA the player controlling them. The visuals are also full of small details, like seeing enemy Kavash crawling along bridges below the playing field, or even just the contrasting styles of the organic aliens against the mechanical style of the human vehicles. The overall graphics in general are pretty high quality, with great models and textures to compliment the wonderful effects displayed in battle. The music seems to be the only real weak point, as it’s pretty standard for a game like this, never quite reaching the high energy music from a game like StarCraft II. Even though the music isn’t exactly spectacular, considering the majority of audio will be from other sound effects and the units responding to commands, it’s a pretty minor complaint.

The developers at Sparkypants Studios seem to have more plans for the future of Dropzone, even already having two more classes planned to be added to the game in the future. The closed beta is already underway, so players that are interested should go ahead and click this link to register. The game is actually a blast to play and is a nice change of pace for RTS and MOBA fans. Given that Sparkypants Studios is made up of staff members that have worked with companies like Firaxis and Big Huge Games, there is actually a good amount of development experience going into this title, and we can’t wait to see more.