Review | Batman: The Telltale Series – Episode One: Realm of Shadows

Earlier this summer, Telltale Games allowed us at GotGame to preview their newest adventure game, Batman: The Telltale Series. Now that the first episode is available, fans of the Dark Knight can truly see what it’s like to get into the mind of billionaire Bruce Wayne, who as we know, spends his nights patrolling the city as the infamous vigilante known as Batman. Though fans of the DC superhero would likely have a set expectation, this isn’t the typical Batman universe. Telltale has taken quite a few liberties and thrown some curve balls toward the player, some of which coming across as a welcome breath of fresh air. To keep things as spoiler-free as possible, this review will focus more on the mechanics and the overall feeling of the game rather than the plot. 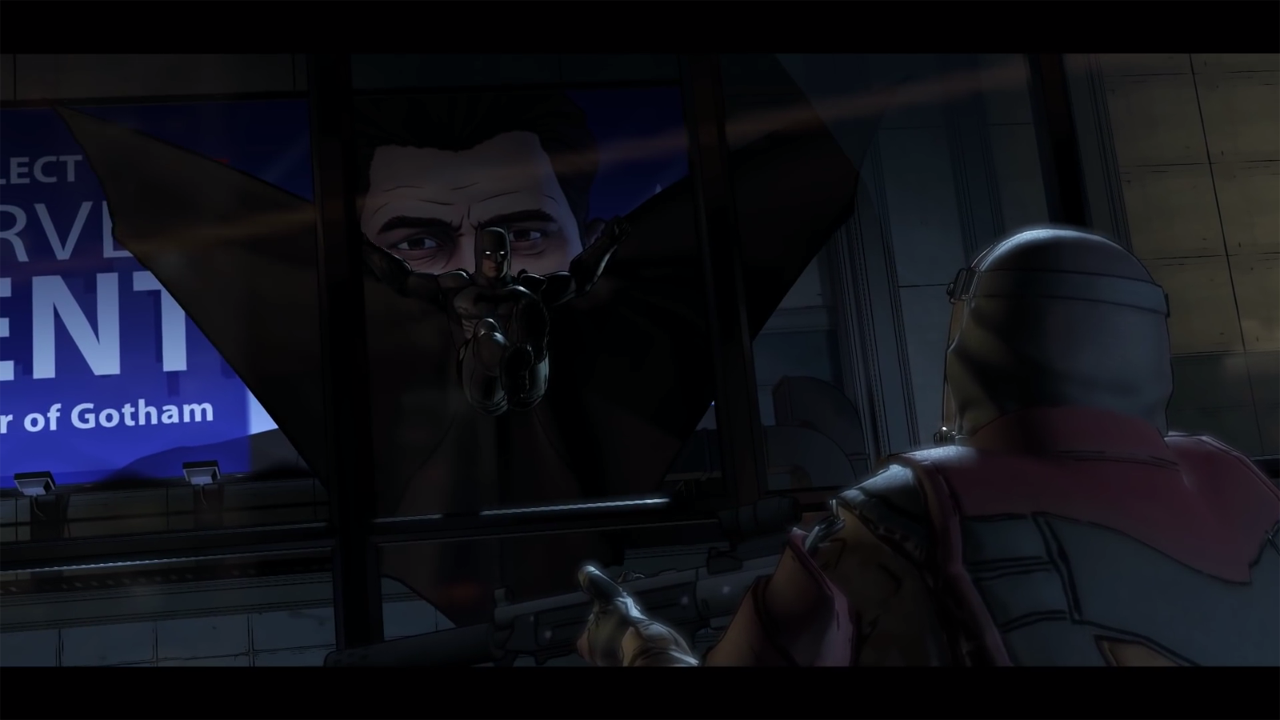 To start things off, it’s clear that Telltale wanted to do a bit more in this game than they have in their past titles. One of the first things players will notice in the beginning is that the game asks the player to choose a color for Batman’s technology, a rather welcome inclusion that makes the player have more choice in the game already. Hopefully Telltale continues this trend and gives players more options to personalize their game experience. Another new addition is the inclusion of crowd play, a multiplayer feature that allows other people to play locally with another web-enabled device using a special code specific to the game being played. Players will vote on the choice to be made within the game, allowing for the progression to be a bit unpredictable in itself. While serious players will likely play by themselves, this can make for a fun interactive experience for a group of friends just wanting to have fun with the story. Since streaming broadcasts have a delay, unfortunately the crowd play function isn’t very effective outside of local play, as the choices pop up in real time and likely won’t be paired properly with the events in the game.

Aside from new features, Telltale has also created a brand new engine that upgrades the visual aspect of the game. The visuals do seem improved, though it’s rather difficult to figure out what the previous engine wasn’t capable of. Some nice things I’ve noticed myself included depth of field used in various scenes and a more natural transition of light, though again, its possible that those elements were in previous games and just went unnoticed. Nonetheless, the visuals for this game are incredibly sharp, utilizing a great blend of colors to set various moods, not to mention bold line work to truly capture the comic book style. New engine or not, Batman: The Telltale Series looks good, raising the bar for visuals of future Telltale titles. 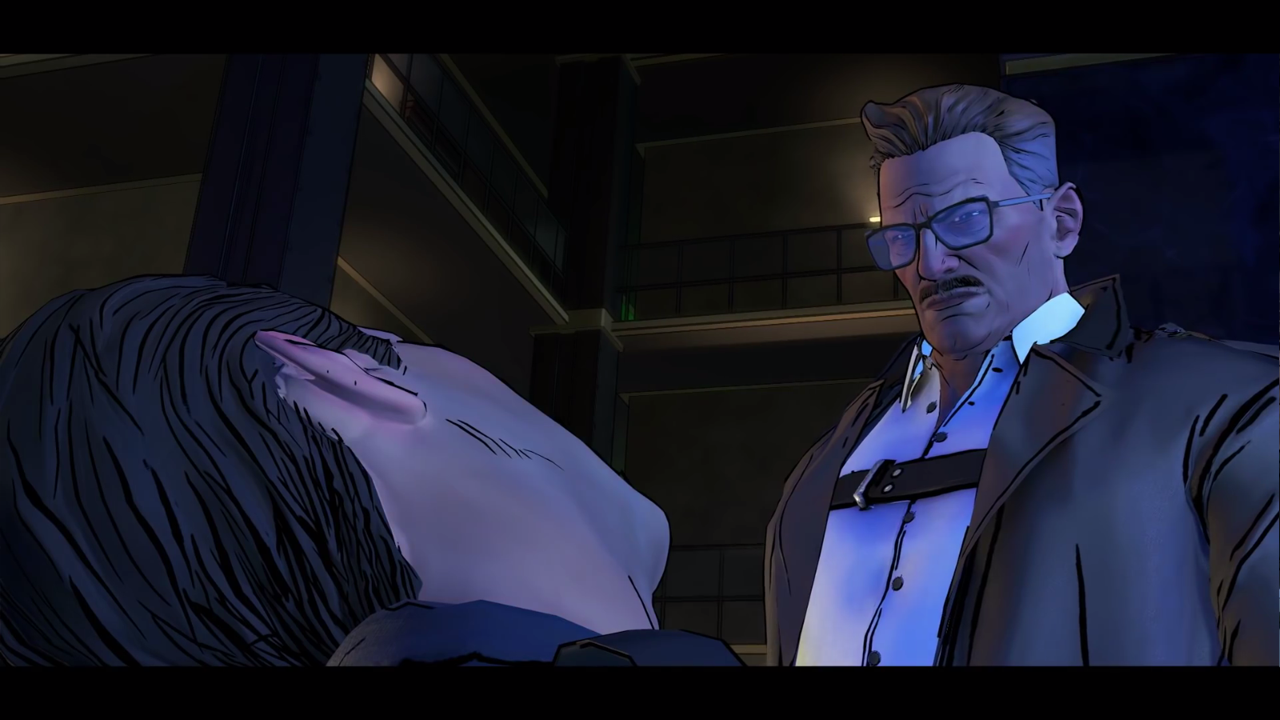 Getting to the story, it’s clear that this game is taking place early on in Batman’s career. Some of the same traditional beats get hit, like the story of how Bruce lost his parents, or how Jim Gordon forms a “partnership” with Batman, but they’re presented with a fresh coat of paint, and that’s without mentioning all the other new factors in the mix. One of the would-be villains from Batman’s rogues gallery is so drastically different in backstory and appearance that this portrayal has actually felt like an improvement on the character. Even some of the other villains show a bit more humanity, giving a subtle political sense to the inner workings of why they do what they do.

Since Batman is meeting many of these villains for the first time, it gives the player the chance to establish what kind of relationship they want with them. Should Batman try to reason with his villains and hold back the violence? Or perhaps he should brutalize them with sheer force, much to the disapproval of Lieutenant Gordon. It isn’t just as Batman that players should consider these thoughts though: playing as Bruce Wayne puts dialogue on the front lines, allowing players to figure out how they want Gotham City as a whole to see him. No matter what choices the player might make, there will always be consequences: even a simple handshake can potentially put Bruce in a bad light. 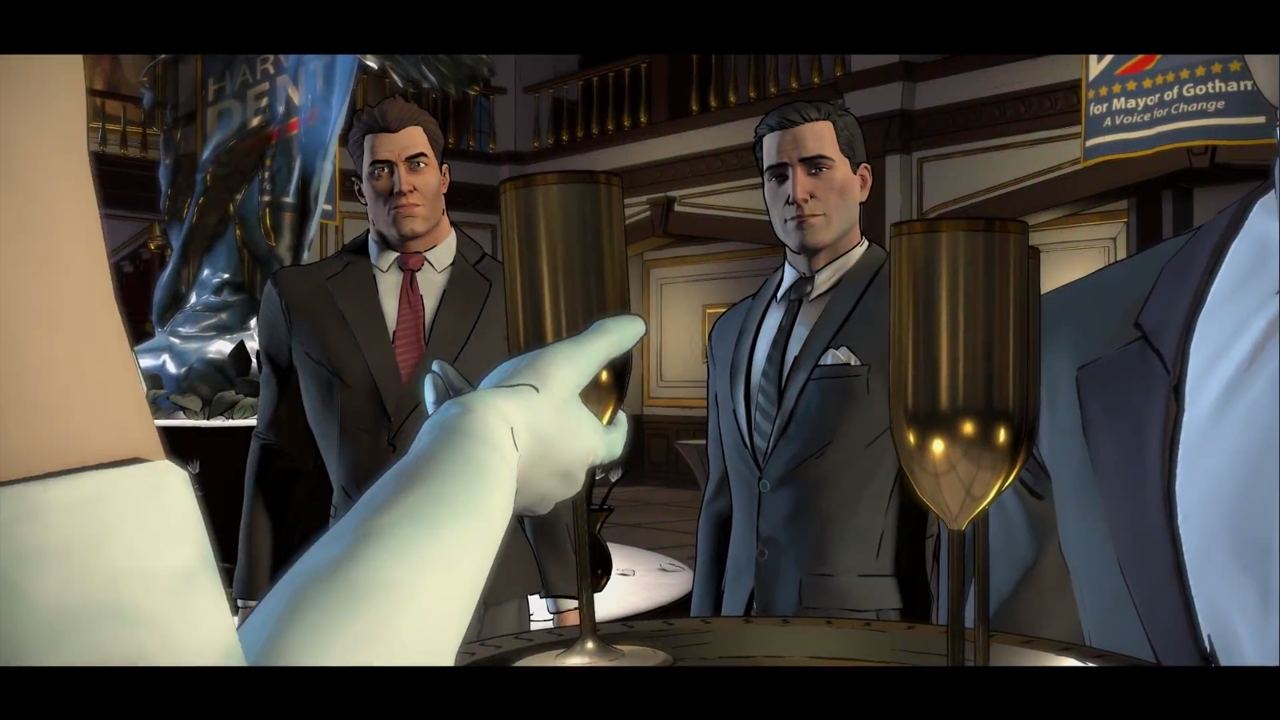 Telltale seems to enjoy making players really think about their choices, which is difficult given the short time limits for each choice. It really provokes us into making the decision based on our innermost feelings, asking what we really want to see. Even if we feel we make a good decision in many cases, there will still be regrets, and likely preventing one bad event will set in motion another. Despite a lot of unfortunate outcomes, they still come across as interesting and do well to enhance the overall story.

The story wouldn’t be nearly as entertaining if not for the fantastic voice cast, which for the most part is well directed. Troy Baker being a well-respected voice actor, lends a great charismatic voice to billionaire Bruce Wayne. Despite this, he still seems like he’s finding his center with voicing the Caped Crusader. When trying to disguise his voice, Batman has a special voice modulator that adds a robotic effect, similar to the one used in the armored suit for Batman v Superman: Dawn of Justice. When he is alone though, his voice tends to jump around, sometimes sounding more like Kevin Conroy, while other times seeming a tad bit uninspired. Hopefully as this series continues, Troy finds a bit more comfort with a voice to use for Batman, as his performance is still good for the most part, it just doesn’t stand out. 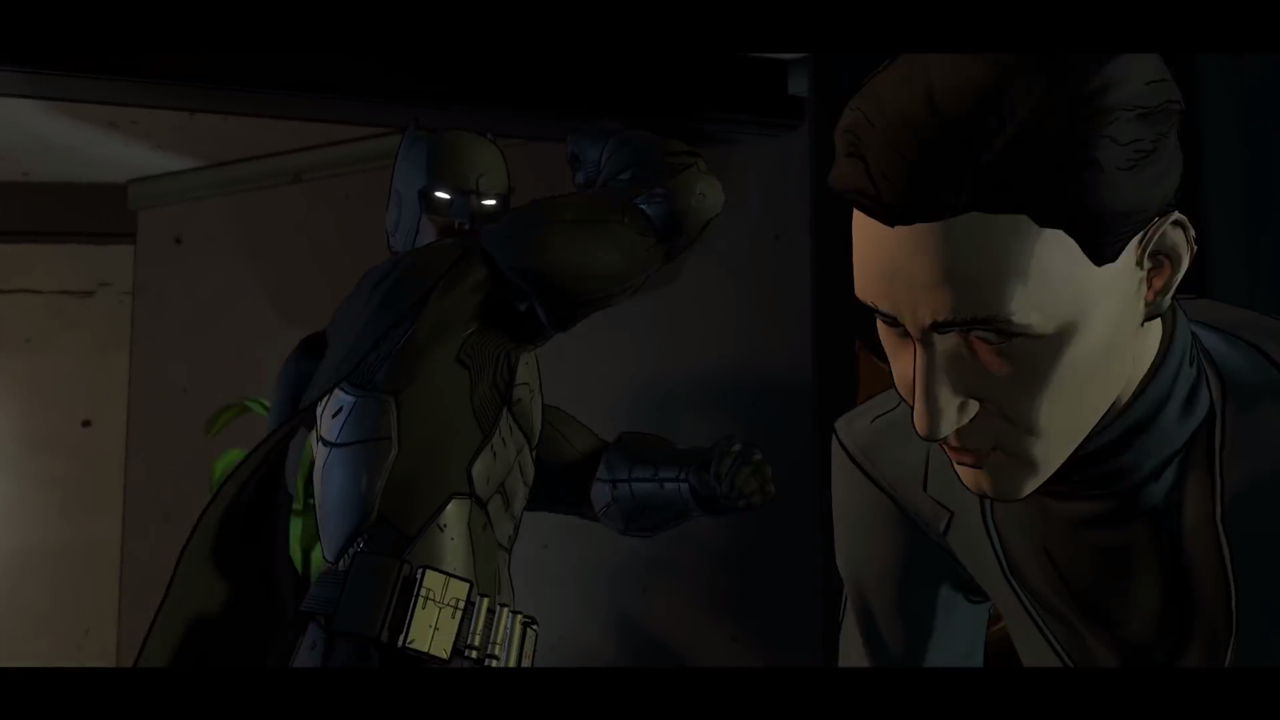 Finally, getting to the gameplay aspect, Batman: The Telltale Series doesn’t change up the formula of previous Telltale titles too much, but does provide some welcome changes. When players aren’t taking part in a story sequence of dialogue, they will typically be exploring various settings. Players will examine points of interest and interact with various objects and people to get more detail of this wonderfully-built world. It may even provide players with some interesting information about the characters or locations like the Batcave. Perhaps the most interesting, however, is the new detective puzzle setup: players may link together points of interest to figure out a crime scene, or perhaps even how to take down a group of guards. It’s a nice feature that really makes it feel like thought is involved in progressing the story, or even just to get into the deeper mindset of Batman and seeing how he pieces things together. The Batman Arkham series has touched on this, but typically provided the crime scene first and then had players find the clues. It’s nice to see it in the reverse order for a change.

Aside from the exploration and detective segments, there is still the quick-time event based combat, which has only gotten a little more complex from previous Telltale titles. Many of Batman’s attacks are rather quick and requires fast movements to keep the fight in his favor, though the system does seem a little forgiving most of the time. As Batman makes attacks, a bat-shaped gauge in the bottom left corner of the screen will fill up, allowing for him to release a finishing attack once full. The controls for these engagements range from button presses to directional movements, but often times will also include combinations of the two. There will also be moments when players have to aim a reticle towards a certain spot within a time limit, which again, is not too different from previous games in Telltale’s stable. 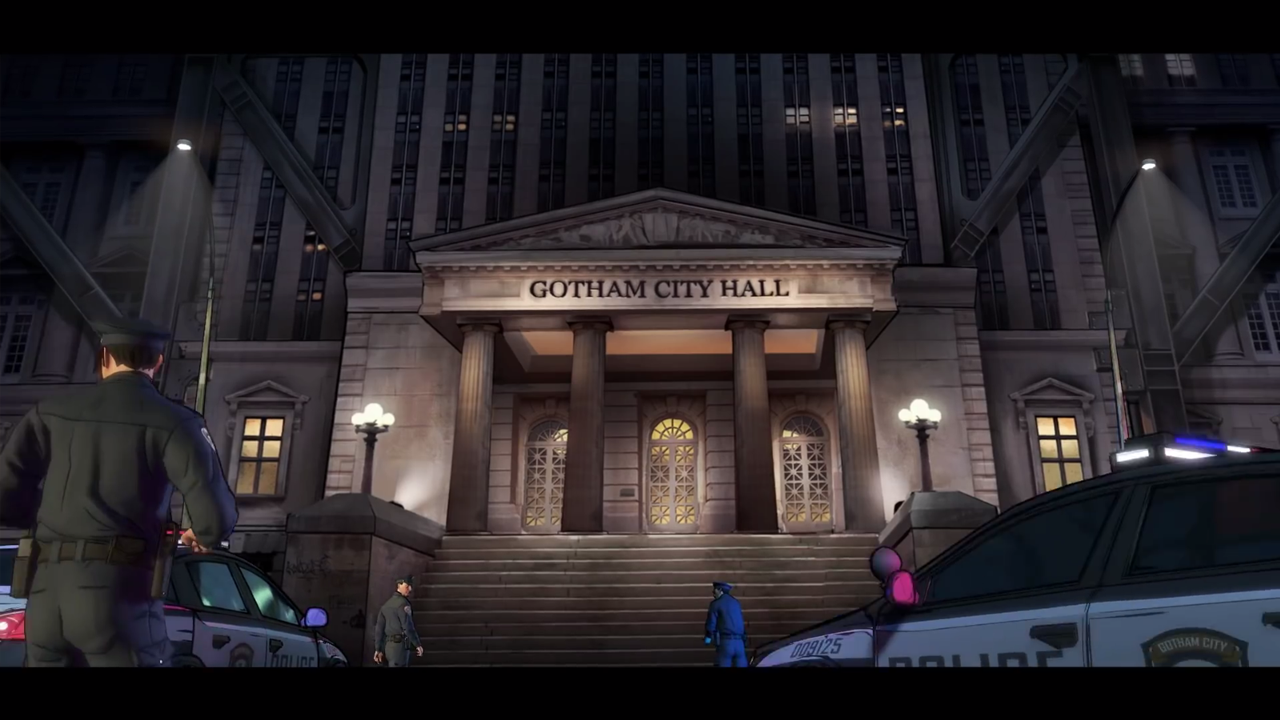 Episode One of Batman: The Telltale Series is a great start to what will hopefully become a fantastic story about the infamous Dark Knight. Getting to play as the character in his early years and having a somewhat unpredictable universe of familiar characters to interact with. Batman fans should easily enjoy shaping the character with their decisions as each episode releases and thickens the plot, and surely, Telltale has some hidden surprises up their sleeve. Even just getting a sneak peek into Episode Two, it’s already clear that some fun moments are coming. Secrets will be uncovered, uneasy alliances will be made, and friendships will be broken. As said by Michael Caine’s Alfred in The Dark Knight, “some men just want to watch the world burn”, and I look forward to seeing how this world crumbles before Bruce Wayne’s eyes.