The Pokémon Company International and Nintendo were recently excited to unveil powerful Z-Moves, new characters, and new Pokémon that will be found in the highly anticipated Pokémon Sun and Pokémon Moon games, set to launch on November 18, 2016. Check out the new trailer, showing off these Z-Moves, as well as many of the Pokémon, below:

First up are the Z-Moves. These are a new element introduced in the upcoming games that can only be utilized once during battle. These moves are the result of the Trainer and Pokémon releasing their full power together when their wishes resonate with each other. Every Pokémon is capable of utilizing Z-Moves in battle, though two key items will be required.

These items are the Z-Ring, which fits on a Trainer’s arm, and Z-Crystal, which is set into the ring. The Pokémon will need to hold the same variety of Z-Crystal as the Trainer, and the two will then be able to resonate with one another.

TOMY International will release a Z-Ring for sale at participating retailers. Utilizing this, when you perform a Z-Move in Pokémon Sun or Pokémon Moon, the ring will light up, vibrate, and even play sounds to go along with the in-game video and sounds.

They have also shared information on the Alola region and trials. The new games take place on an archipelago of tropical islands; four nature-filled and one man-made. This region is known as a resort, and attracts tourists from all around the world.

Alola is surrounded by sea and has an ecology made up of Pokémon native to the region and Pokémon that have recently arrived from others. Humans and Pokémon coexist in a very close relationship within this region, and a culture far different than in other regions has developed.

One aspect unique to this culture is the island challenge, which is an adventurous rite involving travelling through each of the four islands. This event helps young people grow into better Pokémon Trainers, and, as the main character of Pokémon Sun and Pokémon Moon, you will need to attempt this challenge. In order to successfully complete it, you will need to complete the trials on each of the islands, including battling with Pokémon, finding items, and completing tests of knowledge.

A mighty Pokémon known as a Totem Pokémon awaits you at the end of each trial. This Totem Pokémon is much larger than the others of its species and boasts a special aura enveloping its body. When battling, they summon ally Pokémon to join them, making them even more powerful. That said, Pokémon other than Totem Pokémon will sometimes call in allies as well.

The final trial of each island is known as the grand trial, and pits you against the kahuna who leads the island. If you are successful in clearing the grand trial, you will be publicly recognized as having cleared all of the trials and can then move to the next island.

Every trial has a captain whose role is to provide guidance to the trial-goers. Every captain is a Trainer who undertook the trials on the own island challenge several years earlier. Here are details on each captain:

Lana is a captain who is an expert with Water-type Pokémon. She is dedicated to her family and is a reliable older sister who watches over her younger sisters. Captain Mallow is an expert with Grass-type Pokémon. She loves cooking, but it seems that sometimes her taste is a bit particular. Specializing in Electric-type Pokémon, Captain Sophocles is good with mechanics and has invented various machines. Captain Kiawe’s expertise is in Fire-type Pokémon, and together with his Marowak, he studies the traditional dances that have been passed down in the Alola region. 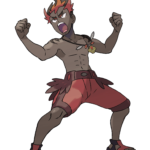 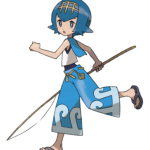 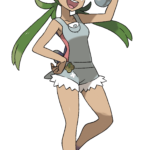 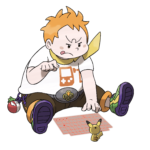 Each island also features a leader, known as the island kahuna, who governs the island. The Kahunas are chosen by the Pokémon known as guardian deities, which are also found upon each island. Melemele Island, where the main character has just moved to, features a kahuna by the name of Hala, who also happens to be the grandfather of rival character, Hau. Hala’s skill is renowned throughout the region, and he grants you your first Pokémon, expecting great things from you.

Pokémon help people reach places inaccessible through human strength alone. This practice, known as Poké Ride, is typical of the region’s culture, and though these Pokémon do not join your team, they can be called upon anytime for help.

Here are some of the newly revealed Pokémon:

Oricorio changes its form by sipping the nectar of certain flowers. Since it has four different forms—the same as the number of islands in Alola—it would seem that different Oricorio live on each of the islands.

The Baile Style Oricorio is very passionate, and power fills its body when it dances. It sends downy fluff flying during its intense dances.

The Pom-Pom Style Oricorio is very friendly toward people, and it uses dancing to encourage Trainers who are feeling glum. When it dances, its feathers are charged with static electricity.

The Pa’u Style Oricorio acts at its own pace, which sometimes makes it difficult to deal with. It sharpens its spirited moves through dance, which increases its psychic power.

The Sensu Style Oricorio is quiet and collected. By means of its dance, it gathers the spirits drifting about in an area and borrows their power to fight.

Minior are formed in the stratosphere and live by absorbing the detritus around them. When they’ve consumed a large quantity of particles, their bodies become heavy, and they fall toward the planet’s surface. Minior has a hard and heavy outer shell with a core within.

Fomantis is nocturnal, and it performs photosynthesis while it sleeps during the day by spreading out its leaves in all directions. Because of the danger of staying in the same location two days in a row, Fomantis begins its search for the next day’s spot as soon as the sun sets.

Lurantis draws opponents near to itself with its flowerlike appearance and aroma—and then it takes them down. It’s said to be the most gorgeous of all Grass-type Pokémon, due to its brilliant coloration and elegant moves.

Mudbray could once be found all over the world but is now a protected species. It’s said that the Alola region is the only place in the world where Mudbray can still be found in the wild.

In addition to the new  Pokémon, several have adapted to the distinctive microclimates of the region and have taken on different forms than they have in other regions. Here are some of these regional variants:

Unlike other Exeggutor, the Alolan Exeggutor has a fourth head—on its tail! This fourth head controls the tail independently and can take on opponents to the rear that can’t be reached by the main heads’ attacks.

It is said that Vulpix came to the Alola region together with humans, but the Fox Pokémon moved to the snowy mountain peaks to avoid the normal habitats of other Pokémon, and thus it ended up taking on this form.

Alolan Ninetales is able to produce ice crystals from the fur that covers its body. It can use these ice crystals to block attacks, or it can form balls of ice, which it fires like bullets at opponents. These ice missiles have enough power to pulverize rock.

Sandshrew have historically lived in desert areas, but the frequent eruptions of nearby volcanoes drove them to abandon the desert and migrate to snowy mountains where they took on this form.

The Alolan Sandshrew of the snowy mountains evolve into Alolan Sandslash with spiny backs that are covered in ice. Alolan Sandslash hide themselves in the snow when strong enemies appear, leaving only their needles exposed and ready for business.