Resident Evil is a pretty iconic series when it comes to the video game industry, with many hits in the franchise that helped redefine genres. Though there are many successful entries, there are still a handful of titles that just don’t really work. Umbrella Corps is one such title, a multiplayer focused third-person shooter that doesn’t even get the Resident Evil name in the title. It’s interesting to see that Capcom is trying to experiment with the franchise, but this was taking it in the wrong direction. Umbrella Corps isn’t the Resident Evil spinoff we asked for, and that’s because we simply didn’t ask.

Developed using the Unity engine, Umbrella Corps was already a bit skeptical, as that engine isn’t typically used for AAA titles. The game was apparently developed by a small internal team within Capcom’s Osaka office, which in that regard, makes the game seem a little ambitious. Intended to be a tactical 3-on-3 shooter, it was inspired by current Esport trends, and though the effort for the title is apparent, it lacks one thing: fun. 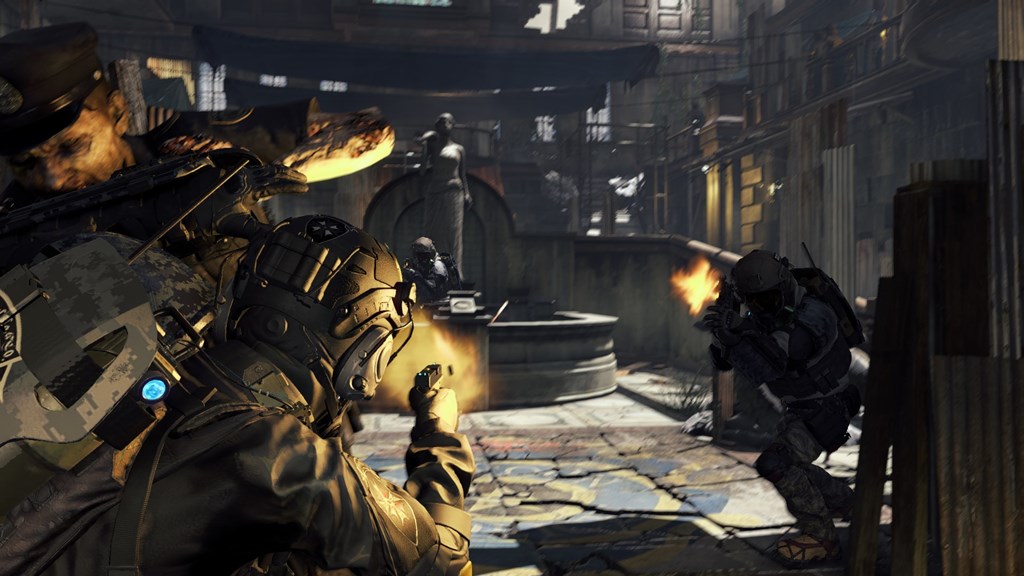 Meant to be a canon entry into the series, the game takes place a couple years after Resident Evil 6, as corporations worldwide try to recover data and files from the now defunct Umbrella Corporation. Hiring mercenaries, the corporations dispatch them into zombie and BOW infested areas to fight off other mercenaries to secure precious intel. While the plot is actually a fairly good explanation for a multiplayer shooter, the presentation of the game does little to help with understanding that there even is a story.

No cinematics, long load times, repetitive single-player content and more seem to hurt the title, which is unfortunate because on paper, this game seems like a good idea. Similar to Resident Evil: Operation Raccoon City, this game offers an environment with three opposing forces: two player controlled mercenary teams, and then infected NPCs that act as obstacles. All the mercenaries are equipped with zombie jammers to help keep the infected off their backs, but through combat, these can be destroyed, adding an extra level of danger. The infected can still attack, especially if provoked, but it helps to have a jammer intact when trying to stick to the objective. It’s actually an interesting idea for a game like this, as most Resident Evil titles just make the infected go after the player no matter what. 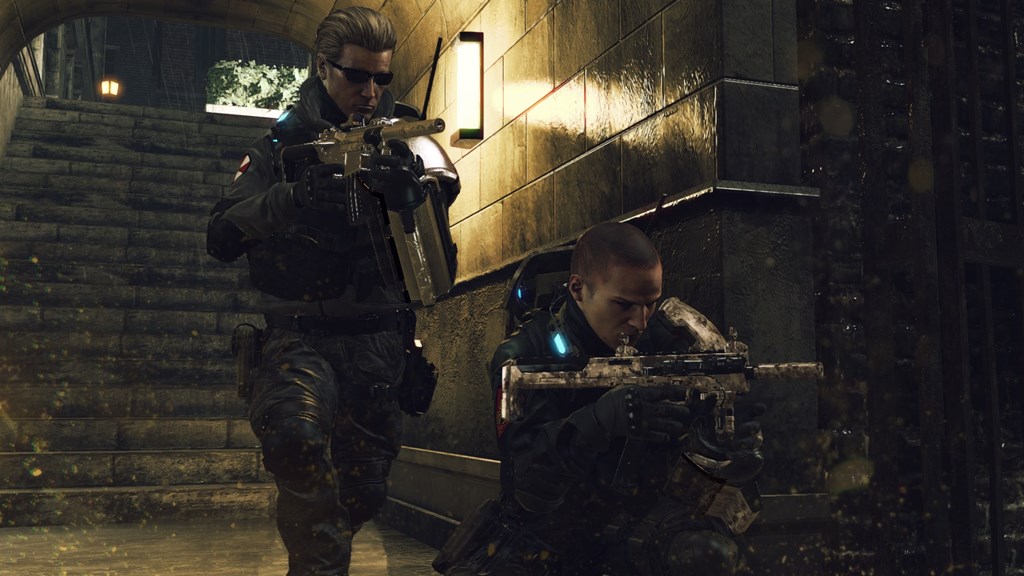 The graphics are a mixed bag, as certain elements like the environments can look fantastic, while others, like the character models, have some problems that stand out in various moments. Models can clip and certain textures are muddy, which again, being from a small team, this aspect is somewhat forgivable. Zombies definitely look grotesque, and the lighting is actually a strong aspect of the game, though a competitive shooter can’t do well based on that. Players with the deluxe edition have a set of masks based on popular characters from the series, which helps for players that want to show a bit more personality, but since they’re masks, they aren’t really acting as that character, giving a somewhat artificial look to it. Even without the masks, there are still several equipment variations and colors to personalize the player’s nameless mercenary.

Getting to the gameplay, and why this game lacks fun, Umbrella Corps integrates cover-based shooting aspects, integrating common elements of other shooters. One of biggest issues with the game is that there is little explanation as to what is actually going on. Playing the single-player content, The Experiment, the player is tasked with collecting BOW samples, which seems easy enough; kill zombies, collect data. The downside is that the game does very little to explain the goal. It doesn’t tell the player right away how many samples need to be collected, and only if the player looks in the bottom left corner to the small numbers, can they realize the number of data samples they have to recover (and it isn’t even properly labeled as such). Once the player notices this, maybe after a couple missions, they will soon realize the repetitive nature of the single-player content. Players will do the same thing about four or five times in one map before moving to a new map to repeat the process. 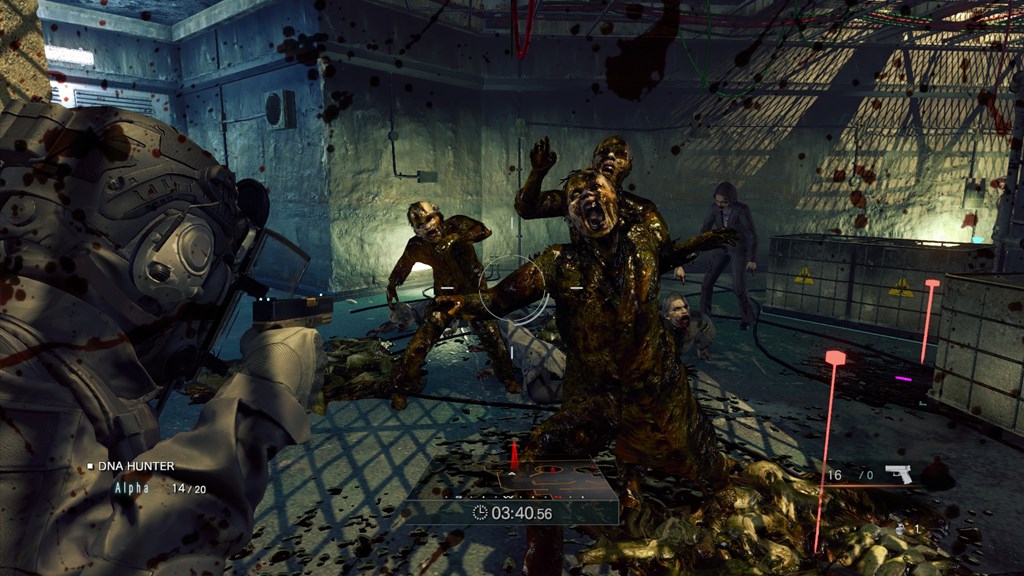 The amount of attacks and maneuvers one can do is actually pretty varied, as players are given quite a wide array of ways to take down their opponents. Aside from the primary and secondary firearms, they can use the brainer as a devastating melee attack, which can also be used to grab a zombie meat shield. They can attack from crouched or prone positions, or my personal favorite, from the top of a ladder on unsuspecting enemies hiding behind a wall. There are even devastating finishing moves, though how to actually perform them is also not explained to the player. Whether the player actually wants to take the time to learn them would be up to them, but given that the game isn’t very fun, despite being pretty deep, it’s unlikely that many players would.

What the game truly lacks is polish, as other competitive shooters like Overwatch or even Call of Duty offer a much more accessible environment for players to jump in. Umbrella Corps gives players decent sized maps with tons of obstacles like buildings, hallways, infected, and more. Despite this, the game is just one big mess, with too much going on too fast. There are player matches and ranked matches, though in order to earn any experience, players can only do this by playing ranked matches and doing somewhat well. This means if you want to level up, you have to play in the ranked matches, meaning player matches are pointless. The matchmaking of the game is unfortunately very unbalanced, as a group of low level players can easily fall into a match with a group of high level players that have several of the weapons and equipment unlocked, making for an unfair advantage. 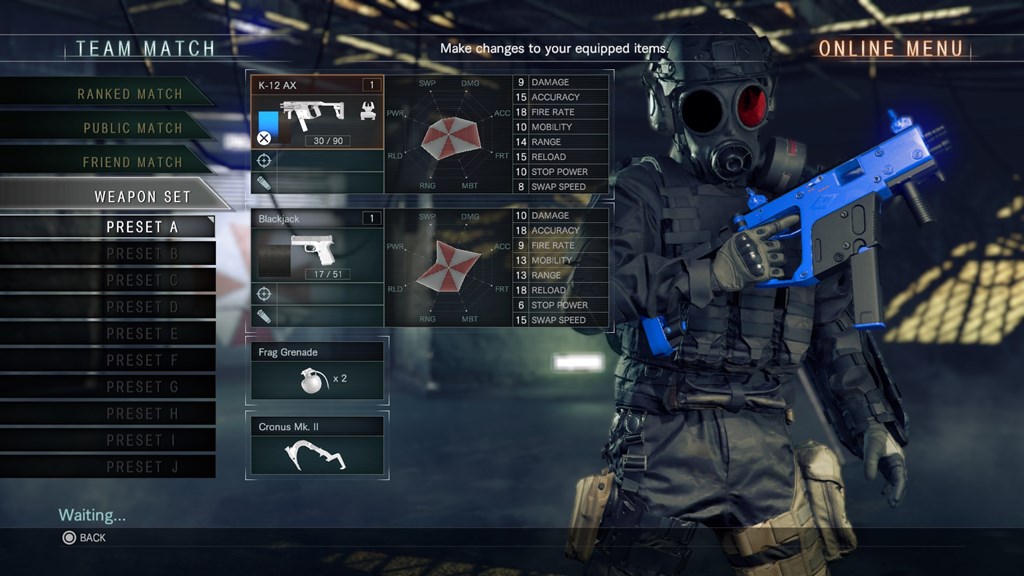 With two main modes, One Life Matches and Multi-mission mode, the options might seem a little limited, though Multi-mission mode offers several different objective types. The downside to these different objective types is that they throw you into them without giving a clear idea of the objective. One of them tasks players with collecting collars, but the game doesn’t indicate where the player actually gets the collar. Another one will have players collecting intel cases scattered around the map, but it makes it sound like the case has to be turned in somewhere, though in reality the entire team just has to collect all of them to win. It’s just that the exposition of what the player is supposed to do is nearly nonexistent.

One Life Matches are just what it says, a mode where players have only one life, their team of three tasked with taking down the opposing team without dying in the process. It’s a quick “best of three” match that sometimes feels a little too quick sometimes. Players can kill fairly fast with seemingly little effort, so it’s pretty easy to feel frustrated when an enemy kills you. It’s even worse when both of your teammates are killed in rapid succession and you end up in a one versus three situation. This could especially be bad if playing with random teammates that won’t even coordinate with you. 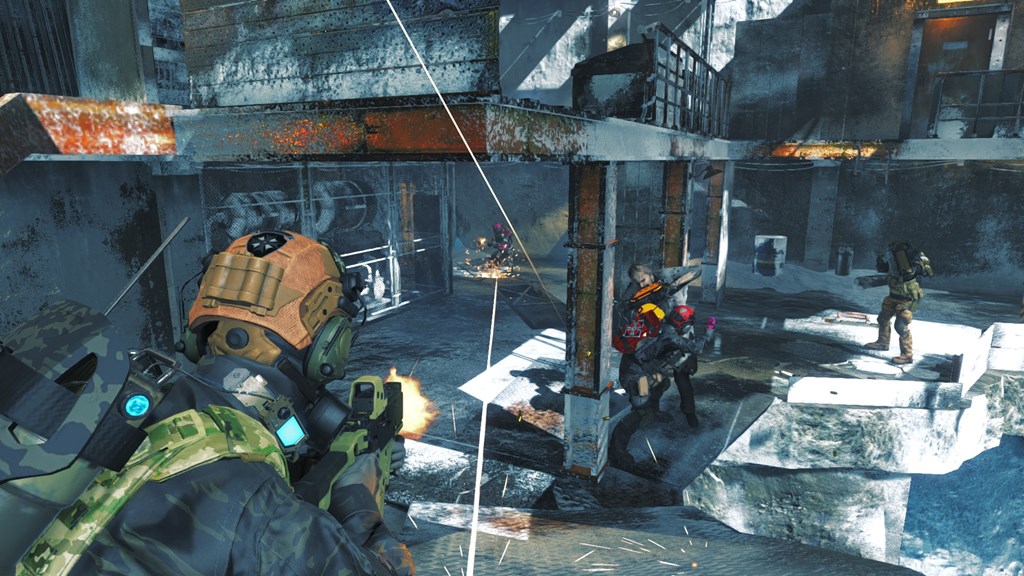 Umbrella Corps seemed to have potential, making a competitive Resident Evil game with a steep learning curve. Unfortunately, there isn’t enough fun in the game to keep most players invested. There are small things that Capcom could probably do to improve the game, though it is likely too late to make such an attempt. The game will be supported with new DLC after the launch, so there is that at least. For the die hard fans that love the game and are currently leveling up to the top of the scoreboards, this is a deep game to master. For the typical Resident Evil or shooter fans however, it will likely push them away too soon for them to want to continue.