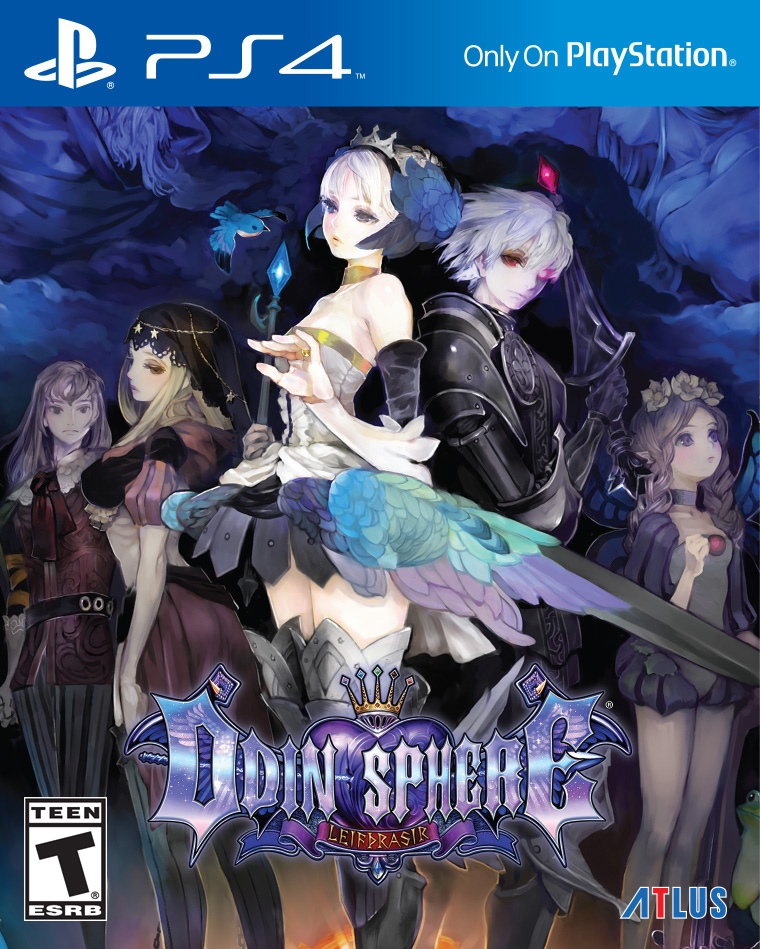 High definition re-releases are standard issue for current-gen consoles, with prettied-up versions of old games gracing the libraries of many players. Some titles don’t do much but add a new paint job and bundle in DLC, while others may add some new textures or previously unreleased sections to sweeten the pot. And then there’s Odin Sphere: Leifthrasir, which overhauls and refines its original game from the ground up IN ADDITION to giving the HD, 60 frames per second treatment to the classic version and including it in the package. As a long-time Atlus fan, but as someone who missed the original Odin Sphere, I can now say I’m both sorry I missed the original release and happy I waited for this great new version.

Vanillaware, the developers behind 2014’s action-brawler Dragon’s Crown, was doing the side-scrolling action game years before Dragon’s Crown ever released. The original Odin Sphere released in 2007 for the Playstation 2 to critical success, though some issues with technical slowdown prevented the game from receiving top marks from some outlets. Now, almost ten years later, Vanillaware and Atlus’ reworking of the Odin Sphere framework improves the game across the board by not only tweaking the graphics and visual performance in the “Refined Mode,” but also streamlining combat, item storage, and minimizing downtime between action scenes. Though the story and characters aren’t particularly original, it’s safe to say that if you’re into action-RPGs, you can stop reading now and go pick up a copy.

If you’re still here, then let’s get down to the basics of Odin Sphere: Leifthrasir. Throughout the 40+ hour game you’ll play through the stories of five different characters in a war-torn world whose stories intermingle with each other. Each character wields a Psypher, a weapon imbued with special powers from Netherealm crystals. Each character’s story takes place over the same timeline, which means you’ll see the same story from multiple points of view; one story’s hero will be another’s villain. There are deeper characters and stories to be found out there, for sure, but the writing still feels very solid for a Dynasty Warriors-esque platformer, and the voice acting holds up well in both English and Japanese. Still, regardless of which character you’re taking on, there’s plenty of combat, cooking, farming, and more to be had.

Odin Sphere is a 2D action platformer: generally, each level’s task will be to find and defeat the boss, taking out minions along the way and collecting “phozons,” crystallized spirit energy used to enhance your character’s health, level, and abilities. Combat is fast-paced and fluid, and though mashing the attack button over and over will take care of many enemies, you’ll need to properly utilize directional attacks, dodges, and other maneuvers to defeat later enemies and keep your combo gauge high. Each scene in a level rates you from C to S-rank, with higher ranks conveying better loot and more money. You’ll generally find an attack pattern you gravitate towards with each character, but combat still feels fun even when it gets a bit repetitive.

What’s most entrancing about Odin Sphere: Leifthrasir, however, are the improvements Vanillaware made on the game between the Refined Mode and the Classic Mode. Classic Mode isn’t a bad game by any means, and it retains more of the old-school Atlus feel: difficult, at times crushingly so, requiring a serious attention to detail and tolerance for grinding to succeed. It’s hard to go back to Classic after playing the Refined game, though, since Vanillaware redesigned gameplay even at the most basic level. Some changes are small in comparison, like dividing the item bag into pouches so items are easier to find in a pinch. Some changes stretch deeper, though: in the original game, every attack you used, basic or otherwise, would decrease your stamina meter; running your stamina out stuns your character for a couple seconds. This slowed combat, making it more calculated and methodical. The new system, however, replaces the stamina gauge with a power meter only used for certain types of special attacks; basic attacks are free, the meter refreshes as you do damage, and there’s no stun for emptying the meter.

Leifthrasir focuses on speed and providing opportunities for massive chains of combos, with the meter maxing at 999 hits. It’s the kind of change that makes the game more entertaining for watching and streaming, and that’s a good thing in the modern game climate. That’s not the only base-level refinement that changes the nature of the game, though: in the original Odin Sphere, collected Phozons could only be released once you acquired a special skill. Special trees would release phozons in to the air to nurture seeds planted nearby, and more often this required stopping either before or mid-combat to plant a seed in hopes of releasing enough phozons in combat to harvest the fruit. Leifthrasir allows you to release the phozons you’ve captured at any time, making it much easier to plant and harvest fruit in the game. In fact, many of the game’s changes tend to make the game easier, so much so that some purists may be turned off by the Refined gameplay. 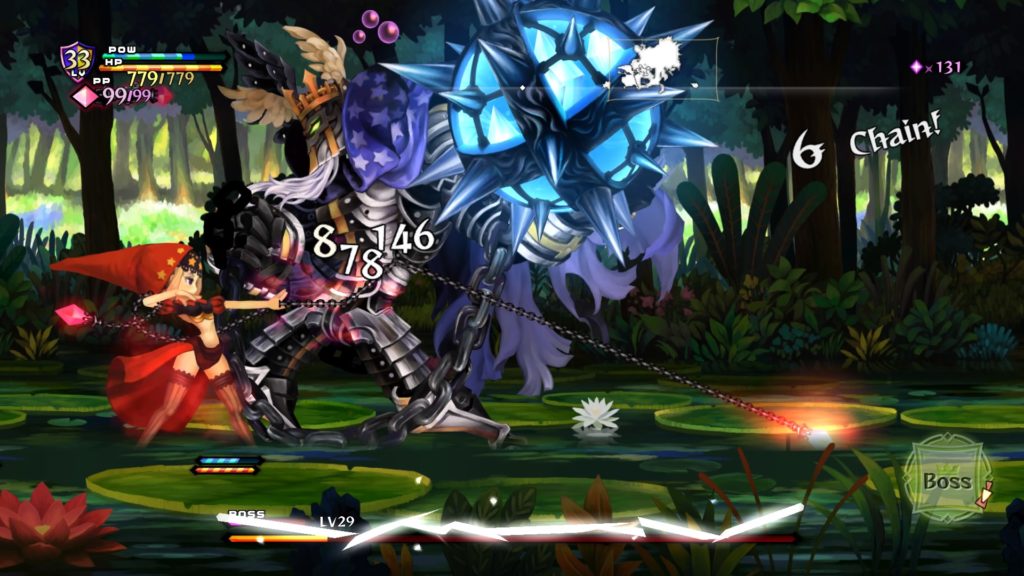 One of the journal pages you find in the Classic Mode talks about how combat isn’t something to be taken lightly, that it requires thought, pacing, and attention to what you’re eating, amongst other things. As much as I love the Refined Mode (and still recommend it for first-timers to the series), some of those refinements dismantle the elegant system that makes Odin Sphere feel like a true action-RPG instead of just an action game with RPG elements. Air dashes and dodges make it easier to maintain combos, but I felt like I paid less attention to where I was on the map and the enemies nearby when I knew I could dash away to safety at any moment. Planting seeds and harvesting fruit feels like a somewhat confusing hassle when you can grow your plants at any time by releasing some of the phozons you just happen to be carrying around, so making a choice between bettering your skills and reaping bonus experience doesn’t carry as much weight. And because it’s relatively easy to harvest experience from plants, this makes buying meals from restaurants seem a little more frivolous, since there’s practically no point where you’re starving for experience to level up. Again, this doesn’t break the game, but it does make it feel very different. For those looking for a more tactical experience, the Classic Mode is sitting right there, unlocked from the second you turn on the game. I still suggest newcomers start with the Refined Mode, but playing on Hard will bring back some of the pressured feelings and tactical decisions experienced when playing the Classic game.

All that said, Odin Sphere: Leifthrasir is a fantastic package, and it even comes with Cross-Save support between the PS Vita, PS4, and PS3 versions. I wish it had been Cross-Buy as well, but unfortunately players have to buy each version separately. Even considering all the great games we’ve already gotten a hold of this year, Leifthrasir is one of my favorites, and I’m hoping more companies will take the approach Vanillaware has to the HD treatment of classic games. It may take more work to do more than enhance the graphics on classic titles, but bringing an old game into the modern age both visually and mechanically makes the experience better for everyone.