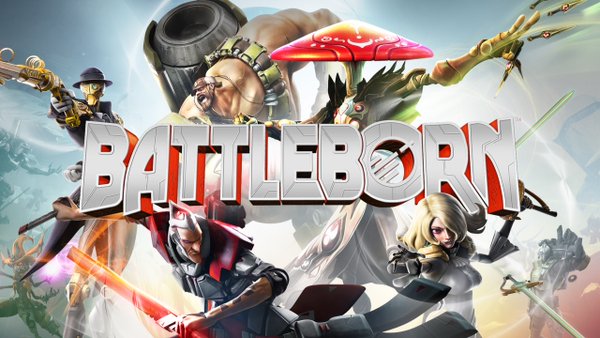 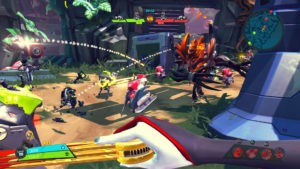 My time with the Battleborn beta was problematic to say the least. Finding matches were a challenge, and even when I got in one I had bouts of lag or dropped into one-sided matches.

Battleborn starts off with a great video and great little tutorial. So great, in fact, that 2K patched the game to make the tutorial replayable. It’s a good way to start off the game and get players introduced as to what to expect.

First off, it’s worth noting that the game lives or dies by the multiplayer. Whether it’s online or split-screen, you need other players to fully enjoy the game. Sure, you can do the story by yourself, but you’ll find the bosses with unnecessarily large health bars and linear mission gameplay tiresome after a while. 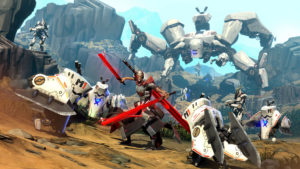 The story is a good way to unlock extra characters quickly and experience some mission gameplay with friends, but it also shows how much of a letdown the game is as compared to what it could have been. Instead of showing more of the characters stories and interactions, their short bursts involving a new character you’ll unlock with a few objectives to accomplish along the way. Some missions are relatively easy, while others (mainly the defense ones) can be frustrating.

Honestly, the story of each character is better told by completing certain objectives for each character, such as playing alongside certain characters or accomplishing kills a certain way. This unlocks more of a background for a character so you can get a better sense of why they’re in this universe.

While the story is enjoyable, the meat of the game is definitely the MOBA-style multiplayer. There’s three modes to check out: Incursion, Capture and Meltdown. Incursion and Meltdown are fairly similar. Incursion has teams defending minions that can be used to take down guardians at the opposing base to take the team down, while Meltdown has you defending minions as they make their way to a grinder to be sacrificed. The third mode, Capture, has minions as well, but are basically worthless as you brawl against the other team to capture three points. Plus, Capture tends to last about 10-15 minutes, while the other modes can take a half hour easily. 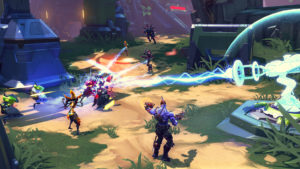 A big negative here are the maps. There are only a few maps for each mode currently and, until more maps are released later, they can get stale quickly.

That’s not to say the gameplay is bad. Each character has a unique play style that can really compliment other players. Miko, the mushroom healer, has a buff that not only heals himself for a short time while increasing the healing he does to others.

Meanwhile, Rath has a launch ability that can set up others to attack the prone enemy. Add in that each character can customize skills during battle as they level up, or buy gear they equip before a match with currency earned in game, and you have a good variety of how characters can be played.

Plus, characters can be customized by leveling them up or completing certain tasks. Each character has a variety of taunts and skins to unlock and use, plus mutations that can give another skill alteration to use during fights. It makes becoming familiar with a character seem worthwhile.

For a console MOBA, Battleborn is a fairly enjoyable title, albeit one that seems underutilized in some areas. Hopefully, more fleshed out story missions and more maps are inbound soon for the game, otherwise it may run its course sooner than expected. While there are plenty of other shooters out to try right now, Battleborn should be worth a look at some point this summer.