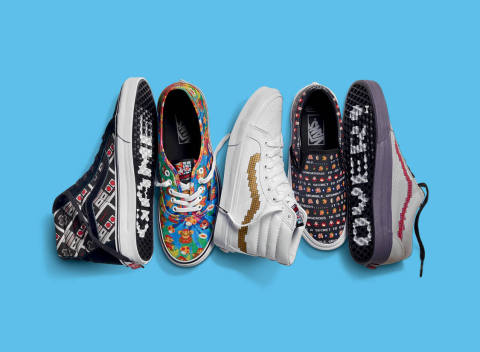 Vans and Nintendo were excited to unveil a new partnership and extensive collection of footwear, apparel, and accessories that celebrate the early days of video games. Vans will feature exclusive graphic prints utilizing 8-bit instpired artwork and characters from titles such as Super Mario Bros., Duck Hunt, Donkey Kong, and The Legend of Zelda, as well as some inspired by the Nintendo Entertainment System. The collection is set to arrive on June 3 in adults and children’s sizing.

The Vans x Nintendo Classic footwear assortment features four variations of the Authentic silhouette. The first colorway is the Super Mario Bros. Tie-Dye, which shows off an all-over print of Mario, several power-ups, and a Goomba.

The third brings Duck Hunt to life with a digi-camo backdrop featuring the iconic dog and a flying duck.

The final Authentic execution plays an ode to Donkey Kong, incorporating imagery from the first level to present the character in a unique floral arrangement.

Their iconic lace-free silhouette, the Classic Slip-On, also appears in the sneaker lineup, featuring graphics and quotes from The Legend of Zelda.

A Sidestriped trio of Sk8-Hi, Sk8-Hi Slim, and Old Skool allow women to pay homage to the NES with console-inspired prints and colors.

They also extend into apparel and accessory items for men and women alike, featuring co-branded tees, backpacks, bags, socks, and hats that all offer prints tying back to the Classic footwear.

The sneakers are sized all the way down to youth and toddler sizes.

Will you be picking up any of the apparel once it officially arrives this Friday?