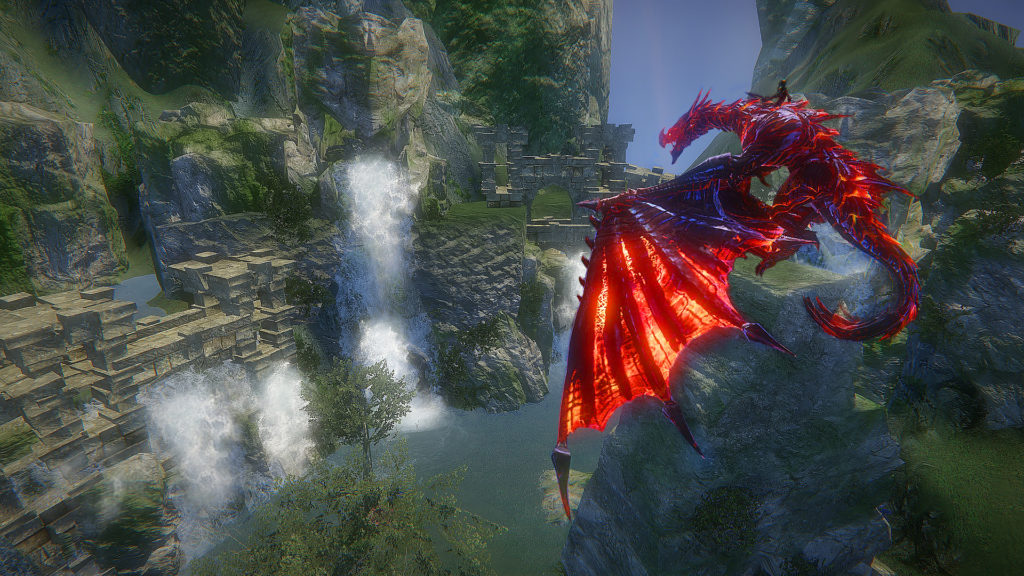 Mounts aren’t unusual in MMORPGs like World of Warcraft and Guild Wars, but a whole game that revolves around mounts? Nexon’s newest game does just that: players in Riders of Icarus explore the land in search of new, powerful mounts with special abilities. I checked out a small demo that Nexon hosted to show off the gameplay style and unique features of Riders of Icarus, and though I hope they address a couple of small issues before the final release, there’s a lot to get excited about.

The main appeal of Riders is definitely its mount system: the creatures you discover and ride in this game are for more than quick travel. Mounts can carry special combat abilities, be turned into pets to accompany you in battle, and even be converted into special seals to enhance weapons and armor. There are both ground and aerial mounts, and multiple rarities: Elite, Hero, and Legendary. If you’re expecting to just through a Pokéball at the mount to catch it though, you’re in for a surprise. Each mount you catch has to be tamed, and the taming process changes based on the rarity and type of mount.

Our demo started in a camp near a herd of bears, and each of us needed to tame a bear. The taming process for them was fairly simple: after entering capture mode, I had to creep up to the bear and jump on its back, triggering a quick-time event to try and stay on the bear while it bucked. Keep in mind, it’s not as simple as pressing Space to jump; you have to actually jump on to the back of the mount. It’s not the easiest task in the world…and it’s even harder when doing it from the top of a cliff.

As mentioned before, depending on the rarity of the mount, the tasks you may need to perform to capture it vary…in the case of Tritan, an Elite bear, you have to jump on its back just like other bears, but this time you have to leap off of the edge of a cliff and land on the bear’s back. The four of us journalists in the demo tried the task, and it takes some skill to actually land the mount (I’d like to mention here that I was the one who ended up landing on his back first and capturing him). Capturing mounts in Riders isn’t meant to be simple, though: the difficulty and variety of capture methods is one of the facets Nexon and the game’s developer, WeMade, is counting on to draw in new players. 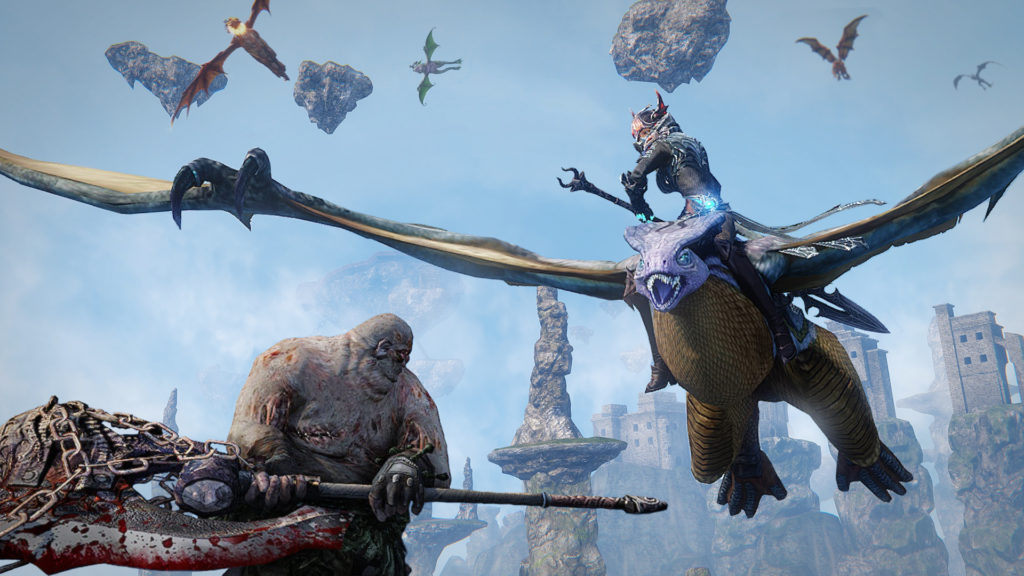 If you can imagine, this task of capturing mounts became even more complicated when working with flying mounts. In the second part of the demo, each of us rode a giant, unique dragon and took to the skies for some aerial combat. When trying to capture new mounts in the air, you have to jump from your current mount over to the new one, meaning you have to properly track it in the air and position yourself far enough above it to precisely land the jump. I can admit that I wasn’t nearly as successful here: in each of my attempts to land the new mount, I plummeted down to the water below (it didn’t kill me, but it bruised my ego). Admittedly, I had a lot of fun trying the different mount styles, and the designs of the Legendary mounts in particular impressed me. The dragons we rode in the second part of the demo were massive and gorgeous, and would definitely convince me to take on some dramatic quests to get one of my own in the full game.

Of course, finding and capturing mounts isn’t the whole game: combat’s a critical part of questing, and the action from combat is really entertaining. Riders of Icarus‘ battle system is more action-oriented than many traditional MMOs; each hero class (Priest, Wizard, Guardian, Berserker, or Assassin) accesses an individual spell and skill tree, with many of those abilities chaining into special combos for additional damage. For those who don’t know all the combos by heart, or lack the dexterity to use them, some abilities can automatically be chained into others by pressing a single key. Abilities are of course loaded with color and flourish, and though I was using one of the demo-specific level 20 characters, I’ll admit that battle felt powerful and fun. Combat takes place both on foot and on mounts; our first battle experience took place in Carleon Mansion, where we searched for and fought Count Carleon. Some story dungeons like Carleon Mansion can be attempted in either solo or group modes, and this mode also offereo mid-bosses as well (which we didn’t encounter during the demo). Completing a story dungeon once doesn’t mean you’re done with it, though: defeating the dungeon unlocks a new, harder version as well to provide replayability and better gear.

Of course, mounted combat is entirely its own beast as well (pun intended). The aforementioned dragons from the second part of the demo were our rides into a ten-man raid against Attaius in a location called Attaius Peak, a wide-open, lake-like region with a huge sea-god to fight. In order to defeat Attaius, we needed to attack both of his arms and the gem in his chest while avoiding his massive attacks. Staying alive required physically dodging projectiles and staying out of the range of his large arms, a task the six of us didn’t quite measure up to. I felt like I didn’t get a hold of aerial combat as easily as I did with ground combat; even when we fought smaller enemies in the air I felt a little more lost as I managed my height and attacks, many of which I couldn’t clearly see the effects of due to the third-person camera angle. That said, the challenge is a big part of the appeal for Riders, and skilled tamers will be able to do some pretty interesting things in the air. 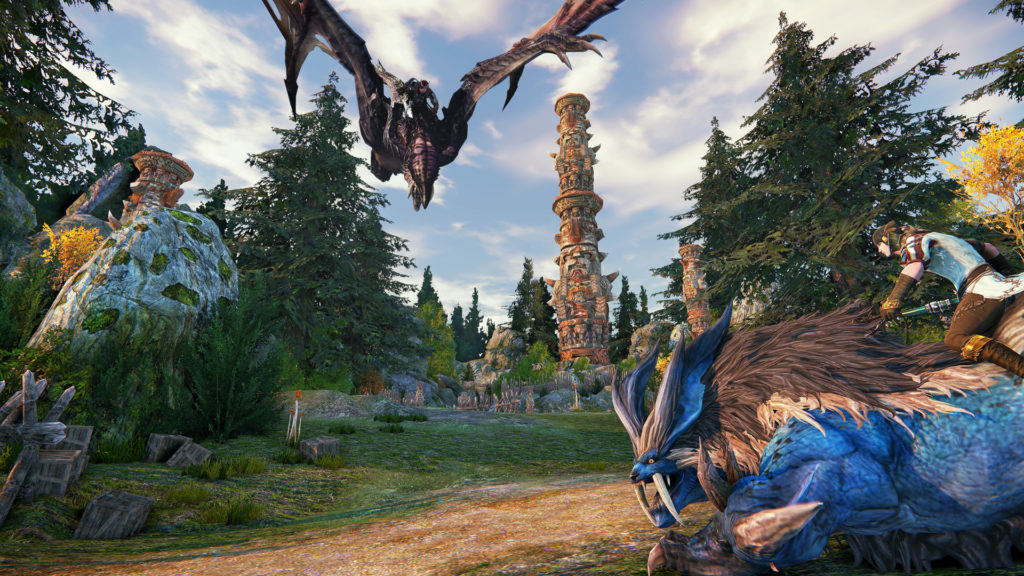 Riders of Icarus is coming up on its third closed beta session, and they’re making improvements based on feedback from the first two. Solo instances received improvements, some of the monsters have re-balanced difficulty, character creation UI has been enhanced, and more. As someone not intimately familiar with MMOs, I found the interface to be a bit intimidating, though I think that some complexity is likely necessary to manage all the skills and abilities in late-game. On the note of character creation though, I can admit that I was a bit dissatisfied with the cosmetic options available for initial creation, particularly an inability to create a character that felt like a black person because of the hair styles. The WeMade team obviously put a great deal of time into their character creation system, and for good reason: some players spend hours changing and tweaking the looks of their characters to make them feel perfect. To see the detail placed into the character creation system and then feel unable to create one that looked or felt like me was a bit of a turn-off. Various skin tones are available from the beginning, but I couldn’t even make my character bald, much less any other hair style many black people have. The developer escorting us through the demo informed us that “beautification options” are available for purchase later in the game, but to have to purchase special customizations to make a character that somewhat looks like me feels like a step backwards compared to many other popular MMOs like Final Fantasy XIV.

Also worth mentioning: though I seemed to be the only one experiencing the issue, my graphics and colors were pretty messed up during a majority of my demo. The colors would flicker in-between looking as intended and washed in some sort of bizarre, oil slick-like mess that made parts of the game visually hard to appreciate. The developers said that this was likely an issue with my video card, but there wasn’t much time or ability to address these issues during the demo. I’m using a fairly standard graphics card, an NVIDIA Geforce GTX 965M, but it’s also worth noting that the game’s going for some pretty high graphical prowess…either way, I hope whatever issue took place for me is something that doesn’t happen when the game goes into later development.

That said, Riders of Icarus still feels like it’ll be a great game, and there’s more time for the team to work on the feedback they’re receiving from players before the game’s final release. Players who purchase Founder’s Packs will get a head-start on the Open Beta and be able to play starting June 29th, with the full Open Beta beginning on July 6th. Nexon has plans for additional features they’ll present during the Open Beta, including dual-system Player vs. Player combat, new zones, maps, and an additional playable class before then end of the year. There are three different Founder’s Packs available currently, ranging from $24.99 to $89.99, with each version offering various perks including special mounts and days of premium service. Learn more about Riders by watching the new trailer below, or by checking out their website.