CORSAIR was excited to announce the release of the BULLDOG 4K living room PC kit as well as their LAPDOG portable gaming control center. 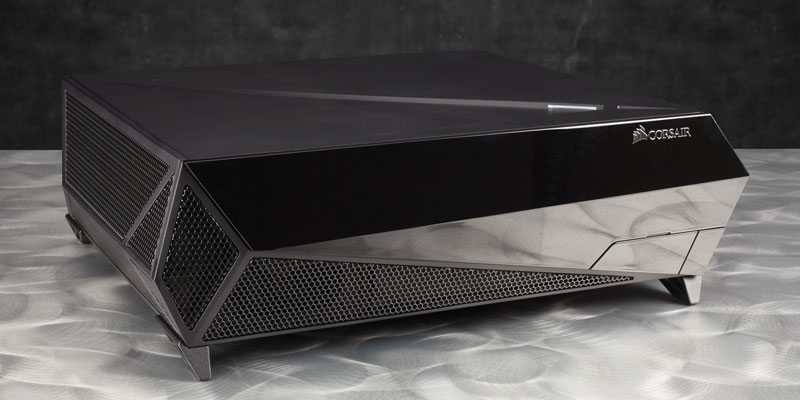 Up first is the BULLDOG set, which was originally announced as a prototype back at Computex 2015. The CORSAIR BULLDOG managed to win a Best of CES 2016 Honoree, and brings a full-performance liquid-cooled PC to the living room. The CORSAIR BULLDOG is available in both kit and configured system form from Micro Center, and features a console-sized case, sleek design, the CORSAIR SF600 SFX power supply, and CORSAIR H5SF liquid cooler to cool the CPU.

Inside the case, you will have an Intel Z170-ITX motherboard. It can support up to three 2.5 inch SSDs or one 2.5 inch and one 3.5inch HDD mount. It can also host several compatible all-in-one graphics card liquid-coolers, such as the Corsair HG10 and H55.

Here’s a quick rundown of the BULLDOG’s availability and pricing, as taken from the official press release:

Available initially only in North America and Australia CORSAIR BULLDOG is sold in the below configurations:

Next up is the CORSAIR LAPDOG, which was also first shown off at Computex 2015 and successfully managed to win numerous “Best of Show” awards. The LAPDOG is a full-size portable gaming control center, allowing players to mount the CORSAIR K70 or K65 keyboard and mouse so that PC gamers can enjoy playing from their couch.

The LAPDOG features a huge removable memory foam lap cushion for comfort, a light-weight aluminium chassis, and moulded cushion. The K70 and K65 keyboards will fit securely into the LAPDOG, and it also features an 11 inch by 11 inch textured-finish mouse pad for precision tracking.

Those worrying about all of the cables can lay their fears to rest, as all cables and connections will be tucked away inside LAPDOG’s hidden compartment. Also within this compartment is an integrated powered USB 3.0 hub with four different ports, so those interested can also connect a USB headset and phone, for example. The LAPDOG will be connected via a 16 foot USB 3.0 cable.

Here are details on pricing and availability, as presented on the official press release:

Available initially in North America, UK, France, Germany and Scandanavia, LAPDOG is available immediately from CORSAIR’s world-wide network of retailers and distributors, as well as directly from CORSAIR.

What are your thoughts on these new items?