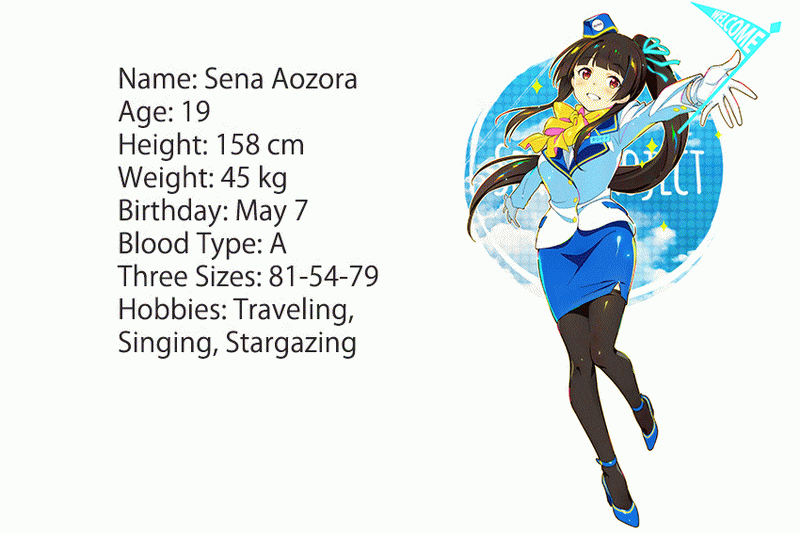 Sekai Project was excited to unveil their first official company mascot, Sena Aozora. This reveal comes hot on the heels of a successful show and live panel discussion at Anime Central in Rosemont, IL.  Sena Aozora has now made her official debut appearance as she ushers Sekai Project into their third year as a publisher and licenser.

She has been illustrated by the artist known as zpolice. This artist is originally from Thailand and currently resides in Japan. He has provided illustration work for light novels, card games, CD jacket designs, and character designs. zpolice has been the proud recipient of the Gold Award in the 19th Dengeki Illustration Contest, and is currently collaborating on the illustration design for the mobile title, Tokyo 7th Sisters.

Chris Ling, co-founder and head of licensing at Sekai Project shared his thoughts on Sena, stating, “Before the plans to make a mascot character were under way, there had been a lot of internal discussion about what Sekai Project would do to celebrate the company’s third anniversary. There was a strong interest in doing more to promote our brand and what better way than to create a company mascot.”

“I wanted something that really represented Sekai Project and the idea of a tour guide seemed to click,” he continued. “In my many travels through Japan I would see uniformed tour guides, with a little flag in their hand, taking groups of tourists around, and the idea of someone guiding fans into the world of games, visual novels, and beyond just took off.”

“As Sekai Project continues to grow, it is hoped that Sena-chan will help guide fans to the wonderful titles and products we release, and at the same time we hope that her warm, friendly smile will become widely popular with everyone. We already have plans in place to utilize her more in upcoming promotional materials, so definitely look forward to seeing more of Sena Aozora very soon.”

What do you think of the new mascot?