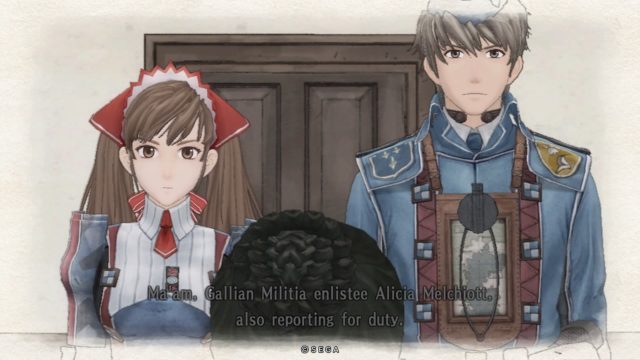 Back in 2008, Sega released a nice little strategy gem for the PlayStation 3 that went under a lot of radars, despite critical success. Valkyria Chronicles released as a fairly innovative experience, combining turn-based strategy with third-person shooting elements, all with a beautiful anime style that used pencil drawn painting visuals to bring the world to life. While the game wasn’t perfect, with decent English vocal performances and some interesting presentation choices, the game still holds up to this day. Cue Valkyria Chronicles Remastered, releasing May 24th for the PlayStation 4. Given a full 1080p boost, a 60 frame per second frame rate, both English and Japanese voice tracks, trophy support (for the first time), and all the released downloadable content, this should be the definitive version for newcomers and fans alike.

Valkyria Chronicles Remastered puts players in the role of Welkin Gunther, a nature enthusiast that is suddenly swept up into the local militia during a war set in the fictional continent of Europa. Being from the neutral nation of Gallia, Welkin and his fellow soldiers are forced to fight to protect their friends and families from an invasion by the Imperial Alliance. Welkin is the son of a famous war hero that left behind a one-of-a-kind tank, the Edelweiss, that becomes the central force behind Squad 7, a squad that Welkin is tasked to command after managing to impress the militia with his strategic skills.

The story of Valkyria Chronicles has always been highly regarded as a solid political drama with deep characters and fantastic visuals to present it. The visuals are for the most part improved for the PS4 version, though the cutscenes suffer from what appears to be an anti-aliasing issue with the outlines of the character models (likely that these cutscenes were upscaled from pre-rendered videos). This is only for the full cinematic moments, whereas the majority of the presentation is told by fully animated models viewed in cropped shots. These moments look much better with clean lines and energetic animation that sets a good tone for the game. 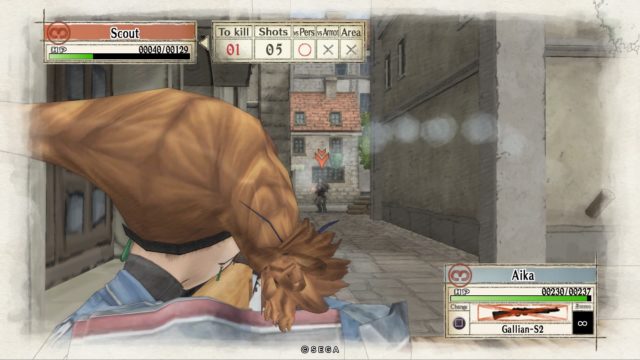 Gameplay remains unchanged from the original PlayStation 3 release, as the game revolves around the fantastic BLiTZ (Battle of Live Tactical Zones) combat system. Players will have an overhead map to select units from using Command Points, taking direct control of them to move them across the battlefield and engage enemy forces in a third-person view. Each unit will have a set amount of action points to limit their movement and their actions on the field, all of which depending on unit class as well as continued use of the same unit. Without including the Tank Commander role, there are five classes that the player will command.

Scouts specialize in recon and mid-range combat, but are no match for heavy firefights. Shocktroopers lack movement range but make up for it in sheer firepower and defense, making a valuable unit for any team. Lancers are anti-tank units that specialize in damaging armored enemies and even obstacles, but don’t do very well against personnel. Engineers, much like Scouts, have great movement range and provide support for the whole team, whether this is with healing or repairing, resupplying ammunition, or even with safe removal of landmines. Last but not least is the Sniper class, a unit that specializes in long-range assault that can help whittle down enemy forces without too much risk, though they have the most limited movement and incredibly low health.

Classes have a sort of weakness/strength system, as some are more vulnerable to gunfire than others, and each unit has a particular strength against another, especially with a well placed headshot. Almost all units are vulnerable to tank fire, all except for the Edelweiss itself, which can withstand practically any damage as long as it isn’t aimed at the rear weak point. This of course doesn’t mean leave the Edelweiss open for direct attack, as enough of them will mean game over. 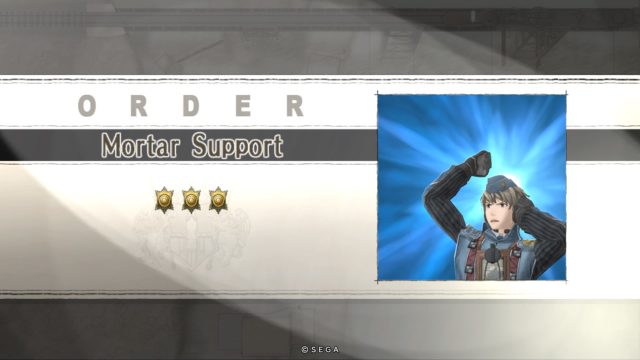 On top of special class strengths are potentials, which come down to being more of an individual feature for each character, mostly based on their detailed backstories. Potentials activate when placed into specific situations, like the “My Way” potential activates whenever the unit is separated from others, raising evasion, while the “Metal Allergy” activates when a character is near metal, which causes HP to drain. In a lot of situations, players will want to choose their team members based on their potentials, so as to create a powerful team with as little vulnerabilities possible. It’s a nice added element that makes the game quite a bit deeper. As classes level up, they’ll even earn special battle potentials that provides new abilities to all members of the class.

Welkin being the commander, he can issue orders that can effect the team in various ways like raising defense, calling for artillery support, and much more. These orders take Command Points as well, so they should be used wisely, though in many situations, they won’t be needed, at least not early on in the game. It is merely another tool at the player’s disposal and while the player has the option, the enemy commanders tend to have the capability as well. The way it’s presented is reminiscent of Advance Wars and the CO Powers that are used in that, which can be fun and shows a bit more of a character interaction from the enemy commander. There are a few missions where Welkin will be away from the Edelweiss and therefore there are no orders that can be issued.

Death should not be taken lightly in Valkyria Chronicles, as characters that go down will be permanently killed in action unless they can be reached within three turns. Careful though, as the enemy can also claim a fallen ally just by reaching the same position, and it doesn’t matter how few turns have passed. While some characters can only be obtained by letting a character die, it only applies to certain characters, so it’s advised that the player tries to keep as many of their allies alive as possible. Fans of Skies of Arcadia will also recognize a couple characters that can be recruited into squad 7, as both Vyse and Aika are fully playable characters in the game, written into the game’s universe due to both games sharing a director, making a nice little cameo form a beloved gem. 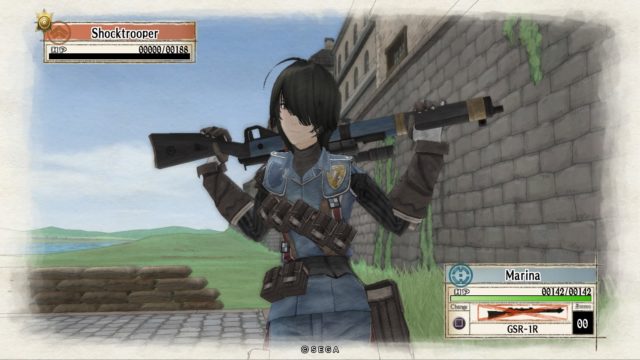 Trophy hunters may be a little disappointed with the title, as all the trophies are claimed upon being awarded with decorations, which doesn’t even happen until about halfway into the game. Each decoration claimed in the game, be it a medal for finishing a battle without losing an ally or for defeating the enemy in a quick fashion, earns the player a trophy. While it is nice to see the game have trophy support, it would’ve been nice to see some extra trophies for doing other various challenges in the game. It also would have been nice if some of the trophies were earned retroactively, as many decorations won’t be awarded until the requirement is fulfilled after the chapter they’re unlocked. Of course, this is really only an issue for people that are going for the trophies and doesn’t take away from the actual game itself.

Between battles and cutscenes, players will have the option to visit the headquarters, where they can upgrade their weapons on upgrade trees, add experience to their classes, switch out recruits with other characters, and even learn more about the characters and their battles. Even the Edelweiss can be upgraded using the R&D Facility, where the player can purchase upgrade parts that are represented by blocks that fit into an 4×4 grid system, the better upgrades taking up more space. Utilizing the space wisely is necessary to have a powerful tank for battles, one that won’t be destroyed easily but can also be effective in a battle with benefits like improved accuracy and improved firepower. There are also passive upgrades that don’t require equipping a part, so even if the grid system proves to be too hard to maintain, the Edelweiss can still be upgraded granted the player has enough money. 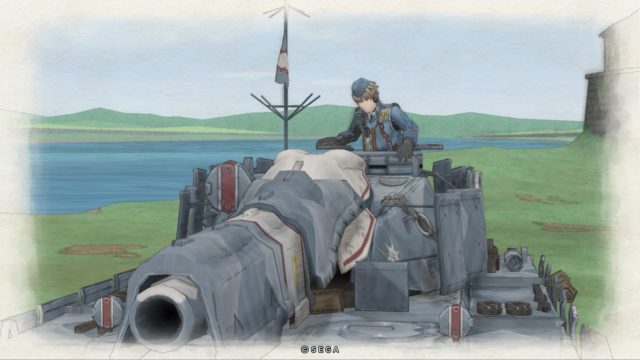 Getting to the ranking system, it can be pretty strict. Players are ranked in each battle based on how fast they can complete an operation, which varies based on the mission selected. Getting A ranks can earn various rewards like special weapons and orders, and for those completionists out there, it may pose an extra challenge. It’s nice that rankings don’t go down based on other factors like wounded characters, enemy kills or other possible situations, so it does make it easier for people that aren’t afraid to make sacrifices.

Players can take part in Skirmishes as well, battles that aren’t a part of the story but can be used to gain extra money for upgrades or experience for leveling up. As part of these Skirmishes, there are also the downloadable challenge maps, including extra story content that fleshes out other characters in the game. One story gives more depth to one of the antagonists, Selvaria Bles, as another introduces the Edy Detachment, a small group of units lead by minor character (but fan favorite) Edy Nelson.

The Challenges of the Edy Detachment skirmishes can range in difficulty from fairly easy to impossibly hard, making it a set of challenges that should be tackled as players progress. Each challenge is based on a different class from the Edy Detachment, so they each focus on different objectives while rewarding the player with lots of experience and sometimes even a special weapon. Fans can definitely enjoy the variety of challenges in the game and it makes for a great strategy option for the PlayStation 4, as it is currently a genre the platform is lacking. 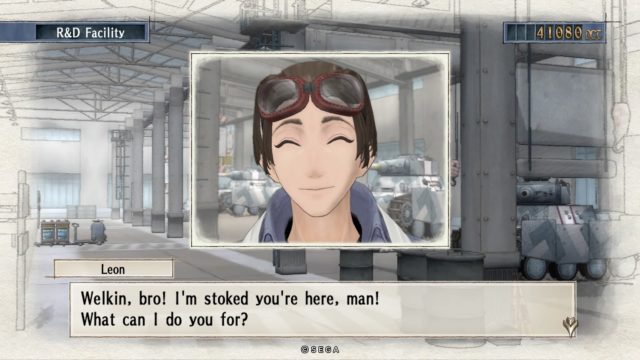 Despite being a great game and a hefty package already, it would have been nice to see just a little more incentive for fans to experience with this remastered title. More story content is always nice, but it’s also pretty unrealistic, so maybe something in the line of new guest characters or some behind the scenes features to show more behind this true gem of a game. Regardless of the lack of brand new content, Valkyria Chronicles Remastered is an excellent game and while it may not be for everyone, it is well worth giving it a try for players looking for a bit more thought to their action games.