KOEI TECMO America was excited to announce the official launch of the highly anticipated Alpha Demo for their upcoming action role-playing game, Nioh. This demo is only available for players to enjoy until May 5, with all ability to download or access it being removed on May 6.

The limited demo allows players to experience both the dark setting and intense samurai combat in Nioh through two diverse stages. The first stage has you come ashore a small island near the village of Usuki. You will encounter the remains of a fishing village set aflame by a mysterious invasion. In the second stage, demonic beings from the Yokai realm run rampant in Dazafu, which has controlled the western regions since ancient times. 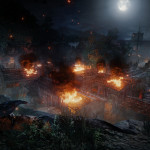 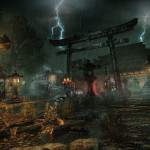 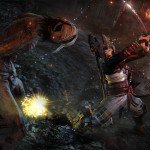 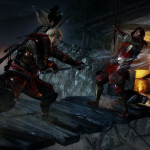 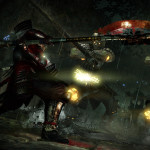 As you play the demo, you will need to overcome brutal foes, and can test out three close-combat weapon classes. These are the spear, axe, and, of course, the symbol of the samurai, the trusty katana.

The spear was the weapon of choice on the battlefields of the Warring States period and allows for long-range thrust attacks, as well as the ability to knock down surrounding enemies.

The axe is heavier and more difficult to wield thanks to the long handle, however it can inflict much more damage than the other weapons.

The katana allows for powerful and varied special moves, excelling in both attack and defensive maneuvers.

If you manage to complete a stage of the demo, you will be granted the The Mark of the Conqueror downloadable content, featuring exclusive in-game content for the game at launch. In addition, KOEI TECMO has launched an online survey, and those who complete it can obtain an original smartphone wallpaper.

In Nioh, players will traverse war-torn Japan as William, a blonde-haired swordsman whose background as a fierce warrior and seasoned knowledge of the blade allows him to survive in the demon-plagued land of the samurai. Players will also face off with other samurai in supernatural sword battles and intense, multi-target engagements offering a level of difficulty that will truly test even the most hardened samurai’s skills, patience, and strategy. Under the direction of Kou Shibusawa, Hisashi Koinuma, and the team that defined brutal action games, Team NINJA, Nioh is being created—as Kou Shibusawa put it—“with the entire power of Koei Tecmo,” and is guaranteed to challenge players in a way that makes every mission and accomplishment feel earned and worthwhile.

Will you be checking out the special Alpha?