Today Pieces Interactive announced that Kill to Collect has received its first DLC update on Steam for free. This update brings a new game mode known as Warzone, as well as several new weapons, items, and power-ups. Players will need to be more careful than ever, however, as, for the first time, minibosses have joined the battle.

The new Warzone mode improves upon the Free Hunt mode, allowing players to encounter longer levels and increased unpredictability, with the player not having any idea when the next health or ammo station, or even the next item vendor will appear as they fight through three increasingly difficult blocks of Geoshelter Alpha. If you fail in even one block, you will need to start at the beginning once again, however if you survive all three, you can get some great rewards. 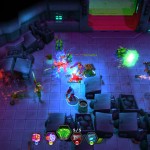 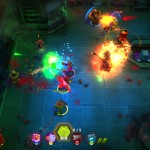 The minibosses entering the fight also bring their own surprises. While they do have fewer special abilities than the normal bosses, they randomly appear in rooms, which can challenge players in smaller combat areas.

In addition to the above content, the game has received a few tweaks to help balance it out.

What do you think of this first DLC update?