Ape Law recently released their psychological “no gore, no jumpscare” horror game, Albino Lullaby Episode 1 on Steam VR as a launch title. They let us check out the game, and a burning question remained in our minds; How scary can a game without gore or jumpscares truly be?

Albino Lullaby begins with scenes showing a burning house and a car crash caused by swerving to avoid a pale figure. Once you come to, you discover that you are in a prison-like facility, in a cage hanging from the ceiling. The cage begins rocking, soon breaking open, and you hear the voices of your unseen fellow prisoners urging you to escape.

You dash through and find yourself in an underground Victorian city where walls, rooms, and even buildingd twist and turn around clockwork, hydraulics, furnaces, and other machines. Odd creatures resembling pillars with gaunt, nightmarish faces make it known that you were not supposed to escape, and begin attempting to capture you once again.

You discover, through unnerving signs and notes scattered about, that these creatures are known as “Grandchildren”, and they are a cult-like group believing in both torture and good manners. They also worship their leader, Grandmother.

As some questions are answered, others are presented, luring you deeper into the twisted rabbit hole, and the story manages to keep a sense of dread present for the majority of the game.

Albino Lullaby largely revolves around your attempts to evade the Grandchildren and navigate through the labyrinthine walls of the underground city. There are several puzzles that you will need to solve, although they typically consist of exploring an area to locate a button, switch, or collectible, activating, and heading to the next area. 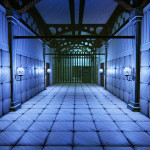 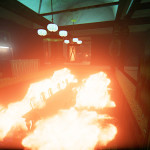 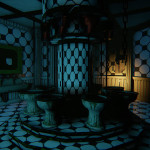 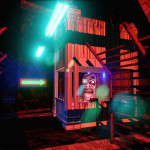 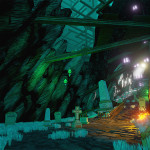 In addition, some puzzles are occasionally reused, making them somewhat repetitive. One major offender of this is a puzzle in which you must locate and push several buttons in an area in order to open a door. Thankfully, the situations in which you come across these puzzles are varied and unique, helping combat the repetitiveness.

In each area, you will also have to worry about the Grandchildren. If you are seen, they will draw the rest in the area and begin chasing you. They are slow, but they can easily surround you and, if you are too close for a certain time, they will recapture you. When dozens cut off every escape route, it’s hard not to feel a sense of dread before you are defeated.

They aren’t the only things you have to worry about, however, as there are some other enemies. These are fewer than the Grandchildren, and you will also need to watch out for the environmental deaths that you can trigger. This lack of variety in enemy type and behavior can be disappointing. 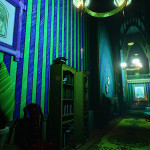 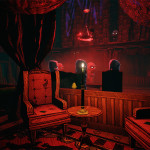 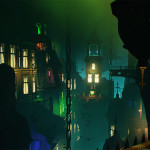 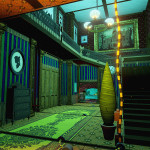 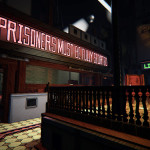 As you explore, you will come across a couple of items in the game that can save you in a pinch. Up first are the blue matches. The Grandchildren despise the blue light and will stay away from it, allowing you to light torches and candles in the game to create temporary barriers.

The second device you will find that can help you out is a remote control. This remote creates a bubble that will knock back any Grandchild that it is pushed into. The remote only has one charge, requiring to be recharged at stations after being used. That said, both items, though unique, can feel quite overpowered, as you never run out of matches and the charge stations are actually rather plentiful, drastically cutting down on the game’s difficulty once you have acquired them.

Albino Lullaby features a cartoonish and slightly whimsical art style that suits the surreal story perfectly. You will see beauty in a serene observation of pleasant rooms and buildings one moment, then entire rooms twisting and gears bending and warping everything around you the next.

The sound also adds to the atmosphere. It will run quiet at times, thus letting you stew in silence as you attempt to sneak through the halls and craw spaces, while other times it will build slowly as it guides you into a room of Grandchildren speaking about capturing you in a zealous fashion.

Other times you will even be caught in a wave of grinding gears and pained voices chasing you as sinister music plays in the background.

When all’s said and done, Albino Lullaby’s best feature is the atmosphere, as it is generally creepy.

The horror game industry typically makes shock value the king, so it is difficult to imagine a horror game completely devoid of gore and sudden fright managing to be interesting and genuinely scary. That said, Albino Lullaby manages to do the job admirably, so horror fans should find a lot to enjoy in this title, whether utilizing virtual reality or not.