Total War: WARHAMMER to be playable in PAX East 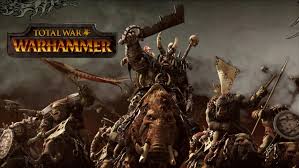 SEGA and Creative Assembly were excited to announce that the public will be able to get their hands on the soon to be launching Total War: WARHAMMER during PAX East. Running from April 22 to April 24, attendees can check out their booth #8109 from 10AM to 6PM in order to check out two new Quest Battles.

Team members from Creative Assembly will be present to aid you in combat, as well as giving presentations showing off exclusive new campaign and battle content. In addition, they will host daily live contests, thus giving fans the chance to play the game live on stage and win some prizes.

Here are the battles that players will be able to check out during the event:

ABOUT THE BATTLES PRESENT AT PAX EAST:

‘The Amulet of Sea Gold’ – Balthazar Gelt, Supreme Patriarch of the Colleges of Magic, leads his men beneath the rough stone lintel of the ancient barrow mound. He feels the shadows crowd in upon him. Creeping despair writhes the hearts of the warriors as they descend. While this is not necessarily an evil place, it is a place of death; the spirits within resent the presence of the living. Gelt has fought the Undead before; he looks to the men, demands valor and then begins to channel the Winds of Magic.

‘Sword of Unholy Power’ – In the south of the Badlands at the southern edge of the Old World lies a bleak desert and piercing up into the sky is the Pillar of Bone, an ancient arcane fulcrum revered by the Greenskins who live near it. A massive Greenskin slaughter has transpired near this sacred place providing the right condition for the Undead Count to bind the necromantic energy into an artefact. However, he must destroy this Goblin Shaman and his underlings before any Greenskin reinforcements arrive!

Will you be visiting the booth to begin battle?