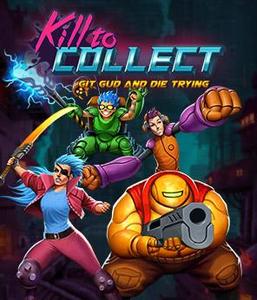 Kill to Collect has invaded PCs recently, aiming to bring a fun co-op roguelike title set in a Cyberpunk world for gamers to enjoy. Will it succeed, or will they be destroyed before they can reach this goal?

In terms of story, there really isn’t too much to say. It takes place in the distant future after some catastrophic event. You are placed in the role of a bounty hunter who is simply trying to earn a living in Geoshelter Alpha, the last known city on Earth. 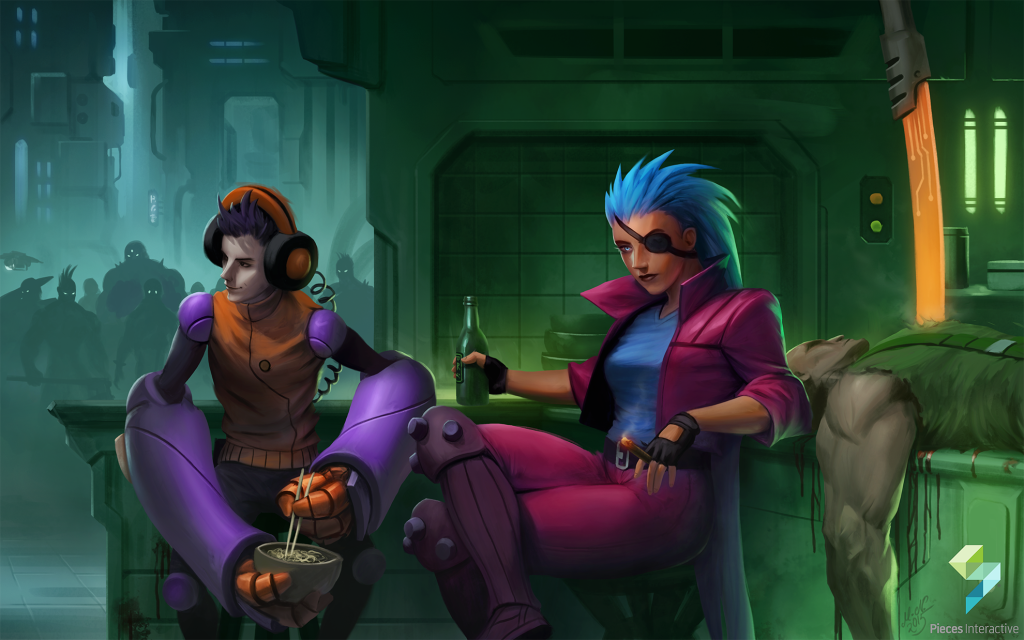 The story spans 13 levels, although they honestly feel more like a tutorial to get the player used to the gameplay than any real story. During each level, which presents some text for the story before beginning, you will be gathering information on a bounty or going after one. Either way, it typically boils down to fighting through procedurally generated floors until you get to the last room, hosting either your chosen bounty or a horde of enemies.

Honestly, in this reviewer’s opinion, Kill to Collect would’ve benefited more from a more in-depth story.

The gameplay present in Kill to Collect is where the game shines. In each level, as noted, you will take turns entering procedurally generated rooms. Each room has a set number of foes you need to clear out in order to open the door to the next, which you will clear, and so on. 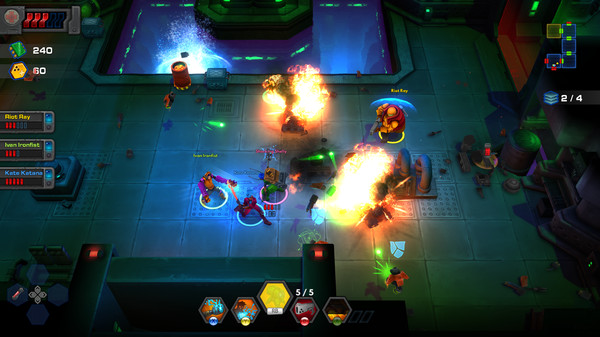 Occasionally you will find special challenge rooms that will give you food stamps upon completion, or even enemies that drop tech credits and other special items. If you don’t mess up too badly, most levels can be cleared in 15 to 20 minutes, at least on the less challenging difficulties. If you go into the game’s hard mode, you should prepare for a challenge, as it can be brutally unforgiving to mistakes.

As you enter a new room, you will have a brief “Threat assessment” moment in which you can scope out the enemies and prioritize who you need to kill first. And with the enemies featuring different tactics, you’ll typically want to make use of this time. You will need to learn which enemies will simply try to get close to melee you, which will shoot from a distance, and which will attempt to shoot you with a hook and pull you closer, for example. The variety helps ensure that Kill to Collect doesn’t simply devolve into a game where all you do is mash attack. 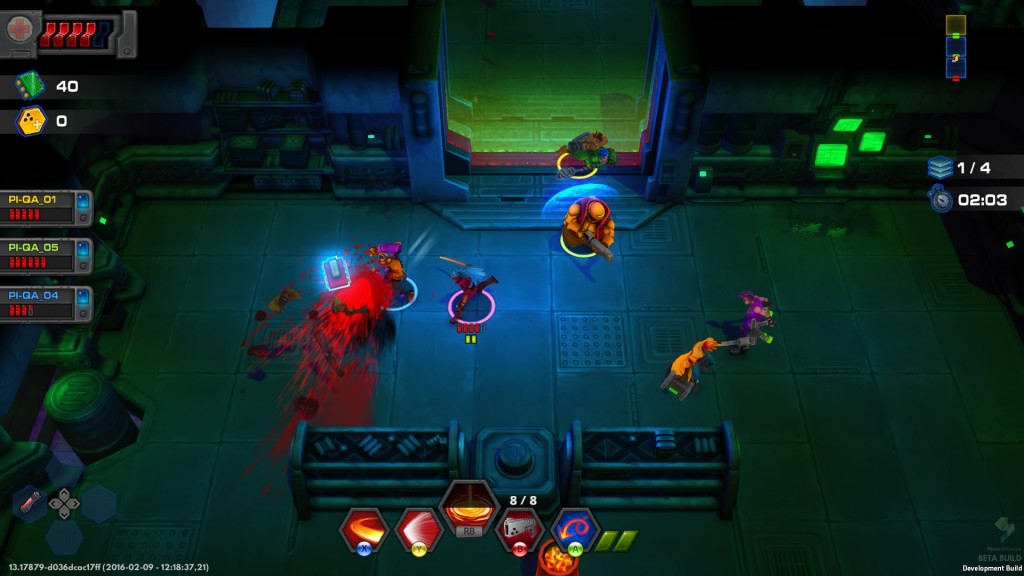 In terms of attacking, once you decide to strike an enemy, you will be committed until it hits, as you have no way to cancel the attack. In addition, when an enemy strikes at you, you will have a brief second to dodge before you get hit. You will also need to keep in mind that it takes a bit to turn, unlike in a twin-stick shooter, which all helps make the game’s combat more strategic. All of this helps result in deaths that feel like you did something wrong, as opposed to the game just getting off a cheap shot.

The end of each floor features a shop area where you can spend the stamps and credits that you have obtained. These shops also have random items, and you can purchase food, which serves as character upgrades, consumable items, such as medkits, secondary weapons, and temporary buffs, and even replenish the health you may have lost along the way.

The upgrades in question can do a variety of things, such as increase your bounty hunter’s total health, shorten the cooldown time on your special skills, and increase damage. These last until either you complete the bounty you are seeking or everybody in your group dies.

If you do manage to kill the bounty at the end of the level, you’ll earn a special currency known as credits, which is accumulated across all three of the game’s modes (Campaign, Free Play, and Challenges). This is then utilized to unlock new character skins, titles, and gear loadouts, all of which you can set before embarking on a hunt for a bounty. 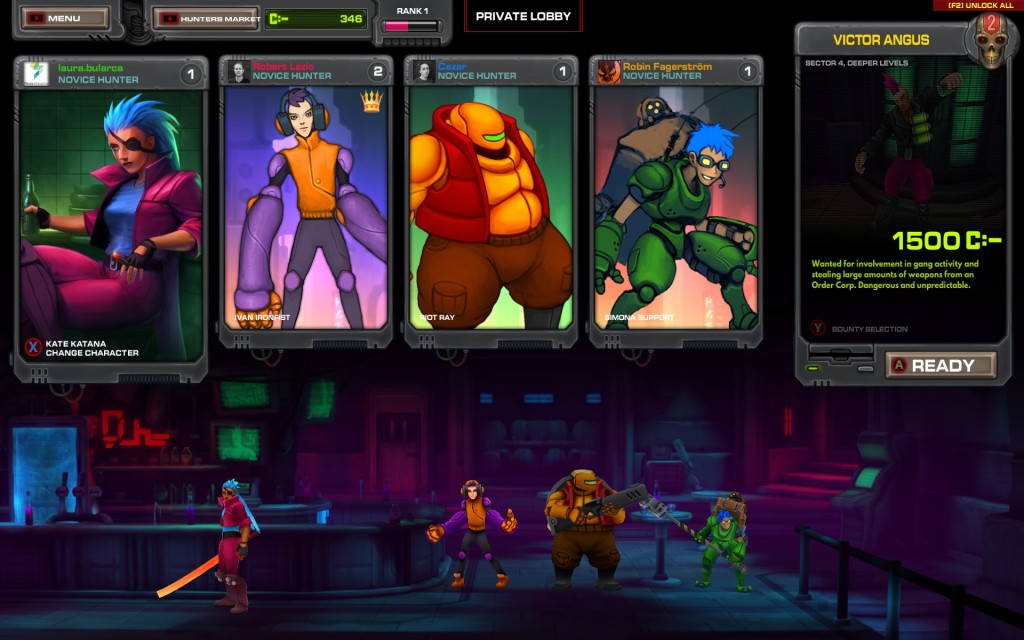 You have four bounty hunters to play as, which feel both unique and equal. Ivan Ironfist has the least damaging attack, but can strike faster than all other hunters and can even warp behind enemies. He also features a special ability that sets foes up to take even more damage the next time they are hit, which all helps to make him more of a hit-and-run type character.

Another character, Shocking Shelley, has a slower attack speed, but dishes out more damage. She can also stun enemies with her electric staff and turrets. When compared to Ivan, the two honestly feel equal, encouraging players to try out each hunter to see which best suits their particular play style.

The most fun comes in co-op, when you can team up with friends. This allows you to experiment quite a bit with your tactics. It also remains challenging, even with a full party, as the number of enemies increases with the number of players.

In terms of level design, it is honestly a bit bland. Each level features an industrial look, which, while nice at first, eventually causes it to feel like you’re essentially running through the same room over and over. The characters, both player and non-player are well designed, however, and help make up for the bland feeling of each room.

Also making up for the bland feeling is the game’s soundtrack. The soundtrack is filled with 80s-inspired music, which suits the game perfectly.

Overall, Kill to Collect is a fun romp through industrial rooms, particularly with friends. It is disappointing that the story wasn’t more in-depth and that the rooms eventually start blending together, with the art style, while nice, only serving as set dressing for the most part. Despite the disappointment this may cause in some gamers, if you continue to play it, you’re sure to find a fun, skill-based action game.