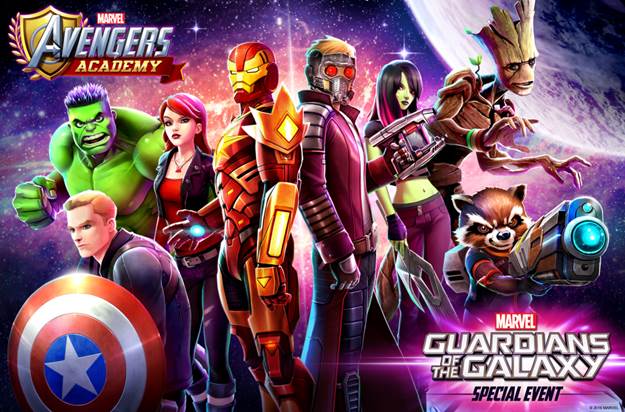 TinyCo and Marvel were excited to announce the very first limited time in-game event for the recently launched MARVEL Avengers Academy. This event welcomes the beloved Guardians of the Galaxy team, reimagined as students, to campus as they crash-land on Earth after escaping the villainous wrath of Ronan.

As they have landed directly on Avengers Academy, they cause some confusion on campus initially, and players will need to investigate their mysterious arrival to unlock a new fan-favorite Guardians member each week. These include Star-Lord, Gamora, and even the beloved Rocket Raccoon. You will need to be fairly quick, however, as Ronan and his henchman are sure to arrive on the scene soon in order to obtain the Power Gem shards and return them to Thanos.

The new update also introduces the first phase of a new combat feature for the game. The Avengers students and Guardians will need to study, brainstorm, and harness their learned skills if they hope to defeat the incoming Chitauri enemies. Phase one features the combination of Super Heroes, which the developers state is essential, thanks to the approaching enemies having varying levels of strength.

The upcoming second phase allows players to show off each character’s special ability through the use of combat perks. You will be able to unleash the Guardians’ special power to face off against the evil Ronan and his crew.

What do you think of this update?