Last year, Witch Beam invited us to play Assault Android Cactus at PlayStation Experience, giving a hands-on demo of the PlayStation 4 version of the game that had released on PC last September. Our preview was very positive and it ended up being one of the most underrated highlights of the show. Even last month, Sony held another PlayStation Plus vote to see what one of the free games in March would be. Even though Broforce is a good game in itself, Assault Android Cactus was not given the attention it deserved, losing to the former by quite a large margin. 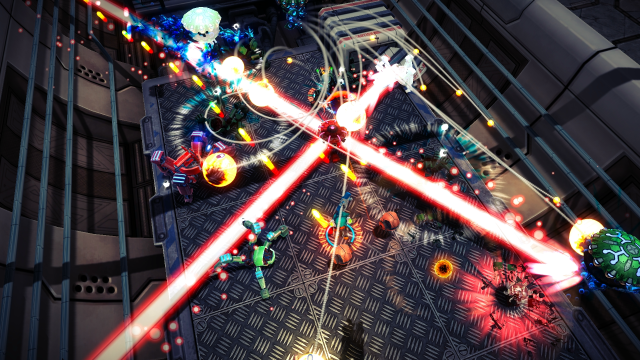 Assault Android Cactus is a top-down, twin-stick shooter, giving players multiple characters to choose from with a variety of different primary and secondary weapons. For example, the main character, Cactus, has a basic assault shot and a flamethrower, making her a very good character for beginners. Also, Lemon became a quick personal favorite with her spreadshot and powerful rocket launcher, making her not only versatile but easy to damage multiple enemies from a distance. The game starts with four playable characters, but as players progress and defeat each boss, they’ll unlock a new android to use in stages. Some of these characters have incredibly unique weapons like railguns or remote controlled drones.

In stages, players are tasked with keeping up a combo chain by defeating enemies in rapid succession. Gaining a perfect chain earns an S+ rank, but the instant the chain breaks, a glass shattering sound effect informs players that their rank would then be based on time, how many times they’ve been incapacitated, and how many other chains could be performed. As enemy robots are destroyed, they drop white energy cells, which can be collected by the player to upgrade their primary weapon. Whether this increases attack speed, adds more shots, or increases damage is all based on the character. 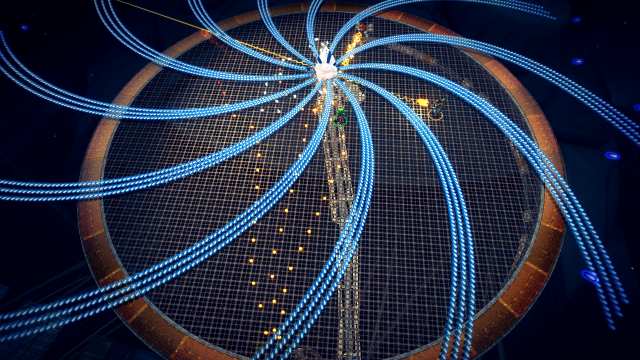 Enemies also drop orbs that change colors for specific power-ups, which are essential for not only keeping a perfect chain, but also for survival. Red represents extra firepower, adding two small turrets with a constant fire rate that adds a large amount of damage to attacks. Yellow, the acceleration power-up, adds angelic wings to a character, increasing their movement speed and making it easy to allow them to move all around the well-designed stages with ease. The blue power-up is the shutdown power-up, making all enemies on the screen temporarily deactivate, allowing a temporary cease fire and a way to reassess the situation by gaining a more advantageous position. These power-ups can work well for different players, obviously all three at once being good, but for some moments, it’s best to focus on specific power-ups to get by. Aside from the power-ups, the final drop is perhaps the most important, as enemies will drop green batteries, which are needed to recharge the battery meter on the top of the screen. Letting the meter deplete means game over, so collecting the battery before it vanishes is vital to stay alive throughout the entire stage.

Getting to the stage design, Assault Android Cactus has quite a nice collection of stages, each with a different layout and some with their own particular gimmick. One stage, for example, will play more like a side-scroller, having players go along a path and defeating enemies ahead to clear the path. Another stage was broken up into large tiles that would be switched out over the course of the fight as it makes the next move more questionable. Most of the stages actually have a changing mechanic where things will mechanically move into place to set the next phase of the stage. It works for a varied experience and no stage is boring, keeping players constantly on their toes. Even when playing with up to four players, the stage design works well for local play and can still maintain a challenge. 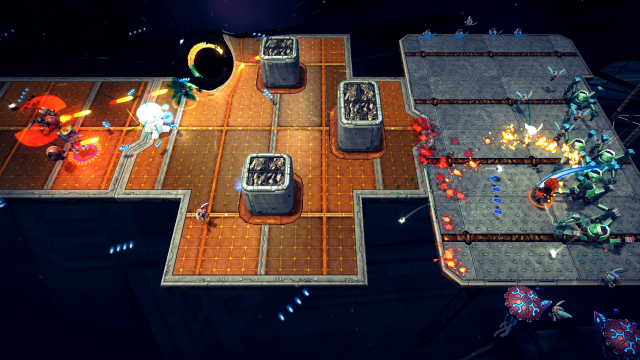 One thing that is worth mentioning is the gravity of item pickups. White energy and batteries will typically magnetize to characters, but the power-ups unfortunately always remain in their spot. The problem with this is that sometimes the stage will change and completely destroy the power-up due to where it was on the stage, and in other cases, it can be in a very dangerous spot. One of the bosses in the game ended up being an issue as she would constantly hover over the power-up, making it impossible to gain without being incapacitated by a one-hit kill move (which had ridiculous range). It definitely makes for a more challenging game, but it would be nice to have these power-ups magnetize too, especially for one of the later boss battles.

Part of the criticism that didn’t make this game earn the vote from PlayStation fans would be the style. Characters have a big-headed, gnome proportion that for many wasn’t appealing. It’s rather unfortunate because it’s a rather charming style that works well for the presentation of the game, and even for people that don’t like it, there is an extra unlockable option for a “normal sized head mode”, allowing for characters to be displayed in a more accurate proportion. Speaking of unlockable extras, this game does a great job of adding a lot of cool features, like a first-person mode (which includes split-screen support), inspired filters, and even music that is affected by the flow of battle. This feels like a classic game where there were special modes and cool features to play around with, and it works very well for this title. 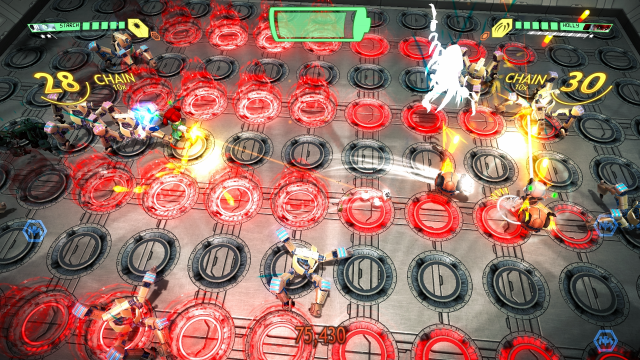 The game’s graphics are certainly more of a stylistic choice, but honestly it surprises me how well this game runs despite using the Unity engine, which has several examples of poorly optimized titles out in the wild. Even with dozens of enemies on screen, the game is still playable with very little slowdown if any. Witch Beam has done a fantastic job of polishing this title to make it one worthy of one’s library, and it’s very sad that it didn’t make it to more homes as a free title, but even as a $15 title, it’s well worth the purchase. For a game as action packed and challenging as this, with four-player co-op, tight controls and a excellent stage design, Assault Android Cactus is a game that can’t be recommended enough.