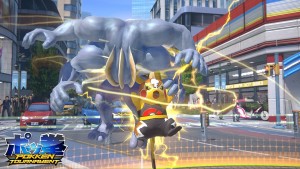 Fans of Pokemon can picture the fighting system in their minds. Two creatures facing off as their trainers choose from a set of four moves shown in a box.

After all, the series has always just been a RPG title. Even during its time on consoles, it was a static battle system that showed the creatures performing moves against each other and patiently waiting their turn to attack again.

Now, thanks to a collaboration with Nintendo and some of the minds behind Tekken, the battles have become live fights with Pokken Tournament, letting you see Charizard taking on Suicune or Pikachu duking it out with Gengar. The best part about this collaboration is that, unlike Tekken, the combat is simple enough for anyone to pick up and play without worrying about moves to memorize or frames to watch to pull off moves. 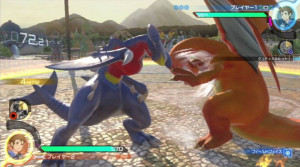 When you first hop into the game, a tutorial shows you everything that sets Pokken apart from other fighters. Besides a standard health bar, there’s a bar that charges over time that lets you summon another Pokemon to assist you and one that can turn you to a super form when charged and activated.

The tutorial also shows off the shift aspect of the fighter. When fights start off, you’re in a 3D arena where you can run in any direction. After doing a few attacks, though, fights change to a traditional 2D fighter style. Hit another strong combo, and you’ll go back into 3D. Depending on the mode, the Pokemon have different attacks, although they’re still simple to string together between light and strong attacks.

The back and forth style may seem odd, but it’s simple to pick up and run with it. Big attacks are normally just a few button presses, and even the huge super attack is simply hitting both shoulder buttons to turn super and hitting them again to launch the attack.

Overall, there’s a decent roster of characters, along with an unlockable one, that range from fast (Lucha Pikachu) to strength (Machamp) to technical (Gengar). However, given how many fighting-type Pokemon there are and how many fan favorites there are, I question some of the choices for fighters in the list. None of the Hitmon-series of fighters are main fighters, but yet ones like Suicune are available. Plus, why was there a need for Pikachu and Lucha Pikachu? Why not just give him a costume unlock for that and use the space for someone else? 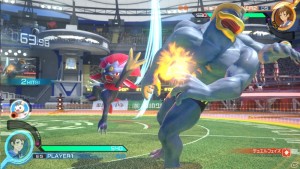 Meanwhile, there are plenty of support Pokemon to unlock. The support Pokemon range from attacking the enemy to giving you a speed or health boost. While you can only use one a round, they both charge during a fight, meaning the other character can be good to go for the next round. They can help change a close battle in your favor against human opponents, and make AI opponents that much easier.

As you go through the story mode, you’ll find that the AI is laughable until you get to higher leagues. Early on, you’ll destroy enemy after enemy until you get a few league enhancements. Even then, the challenge isn’t decent until the final leagues.

Like most fighting titles, the majority of playtime will probably be spent taking on friends and strangers online and offline. The multiplayer is fun to play locally, with one person using the GamePad to view their character and the other using the TV screen. Online, the gameplay is actually fairly fluid, with little latency issues from the matches I played. Games go quick, so there’s no worry about waiting to find a match or playing a long, drawn out match against someone trying to turtle.

Stages are varied and entertaining to watch as you fight as well. They go from simple training gyms to a festival for Magikarp to other gyms and more. It was always enjoyable taking in the surroundings while an enemy was downed or your special charges up.

Like Splatoon, Pokken Tournament brings a genre to a level that’s accessible by all. The game is simple to pick up and play, and enjoyable for plenty of bouts at a time. If you like Pokemon or are a casual fan of fighting titles, you’ll find a lot to enjoy in Pokken.