Review | Landfall (The Tales of Albion) 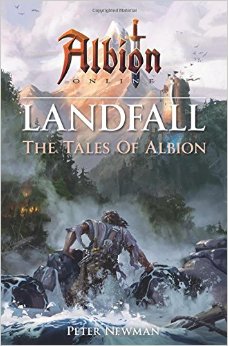 Albion Online has quickly grown, and now even has a novel based on it. In it, Peter New incorporates various places and people from the hit MMORPG, but does he do them justice?

Tie-ins for games vary from being completely horrible to somewhat decent, so fans tend to be wary of them. Being based on games, for the most part, they also tend to be rather predictable, which is further off-putting for many gamers who would otherwise be interested in checking the books out. Characters can feel quite two dimensional, or even completely different from the ones fans have come to know in their playing of the games. All of this results in a barrier that is quite difficult to overcome.

In the case of Landfall (The Tales of Albion), by Peter Newman, it falls victim to few of these traps. The main one it has succumbed to is the predictability, but even then, Newman’s writing style and incorporation of characters and guilds from the game itself prevent the book from falling too deeply into this trap and becoming too dull.

The novel follows the journey of two different groups who came to the land of Albion in an attempt to stake out their claim. Unfortunately, their ships never make it to the docks, leaving the crews to wash up on shore instead. They proceed to try and determine how to survive in the harsh wilderness of Albion, with each group conducting their business quite differently.

The story seems fairly typical, and is also quite predictable in many cases. That said, Peter Newman still manages to keep things interesting by keeping the action fast-paced. The various roles played by the incorporated characters and guilds feel legitimate, rather than simply tacked on for publicity’s sake, and help contribute more than one may otherwise expect.

The three main characters, particularly Prince Randall, are all quite interesting, featuring diverse and complex personalities. They are also quite believable, and following their journey was strangely addicting.

With light-hearted and comical writing, interesting characters, and a fast-paced story, Landfall (The Tales of Albion) certainly does its share to break the pattern of game tie-in novels being decent to horrible, and actually breaks ground into being pretty good, which very few others have succeeded in. Fans of the game will likely enjoy seeing how he incorporates players and places from the world into the story, and those who have yet to play Albion Online should still find a decent fantasy story within its pages.