The Game Developers’ Conference is a great chance to meet other professionals in the game industry and learn about successes and failures from the past year, but it’s also a chance to play some new games. During the first day of GDC 2016 I spent some time at the Day of the Devs section, a display of multiple upcoming indie games. One game in particular, Supertype’s Arena Gods, gave me the chance to bash friends with tridents, shields, and swords in quick-paced, minimalist, local competitive frenzy.

Arena Gods puts players in control of one of four gladiators who can run, dive, and punch. Treasure chests that appear on the stage give players weapons to make kills with as either melee tools or projectiles. If you don’t have a weapon, pummeling enemies to death against a wall is always an option, too… assuming nobody pummels or skewers you first. It’s a madcap, frantic game that looks and feels like a fast-paced, souped-up version of the Atari classic Tank! meets Towerfall. 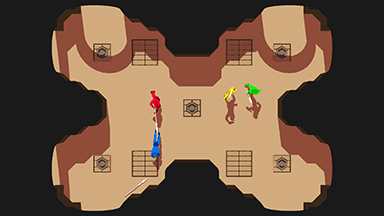 I played at GDC with a friend and a couple random bystanders; we sat on couches, picked up out 360 controllers and started the contest. Like Towerfall, these were Last Player Standing-style, with the first player to three wins taking victory. Rising up through the floor through elevators in the ground, we quickly rushed each other and started punching, diving, and mauling. The edges of the arena looped to the other side, Pac-Man style, so there was plenty of chasing and throwing projectiles through tunnels. The rounds went fairly quickly, and, like the Roman gladiator fights the game emulates, they were fairly bloody: spurts of bright red, pixelated blood shot out from each kill.

Still, games aren’t in their final state on the show floor, and for all the style Arena Gods borrows from Towerfall, I’d love to see it better explain its play mechanics before the match. I read about two critical maneuvers in Arena Gods on their website: catching thrown projectiles, and executions for opponents on the ground… I didn’t know either of those abilities existed. It feels like they tried to add a bit of Nidhogg in to the mix, but I wonder if that might be a few too many mechanics.

The advantages of Towerfall, Nidhogg, and even Tank! were that they took a single, core concept and iterated on it, making the gameplay feel unified. Arena Gods, on the other hand, blends a whole bunch of concepts together in a way that’s entertaining at its core, but didn’t quite feel like it had the depth of its comparison titles. Then again, it’s quite possible that the game would feel more complex/compelling with projectile catching and executions… Only time will tell.

For folks looking for a fun way to spend an afternoon beating away at friends, Arena Gods should offer a streamlined, light-hearted way to do so. You can check out more about Arena Gods at their website, and stay tuned to GotGame for more GDC coverage.