Many games in the world today are very inspired by other forms of media, whether they be movies, books, or even animation. La Cosa Studios’ Klaus is just one of those titles that feels like an homage to other works before it, without stealing any ideas or completely focusing on one particular feature. The animation, the colors, the dialogue and typography, all of it shows symbolic resonance that makes Klaus stand out on it’s own, and that makes for a truly engaging experience. In fact, “experience” is just the right word for Klaus, as even the game describes itself as such.

Set in a large corporate building, the game starts players out on the basement floor as the main character wakes up with no memory of who he is, where he is from, and what his purpose is. All he knows is that he has a tattoo on his arm that reads “Klaus”, making him assume this to be his name. From this moment on, players join our protagonist on a journey of existentialism and discovery, moving through a color coded series of levels as the narrative unfolds. 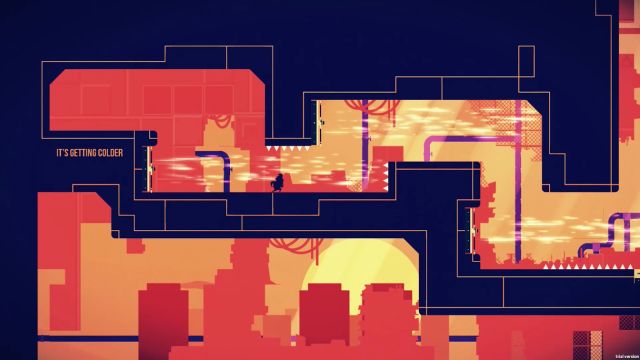 The presentation of Klaus works rather well, as it uses a minimalist approach for various details. Voices are left to various grunts and groans, some of which felt reminiscent to the sound of a Big Daddy from BioShock. Music is very relaxed and often has moments of serene silence where the player gets a chance to hear more of the inner workings of the environment around them. Dialogue is delivered through well placed typography, given by the various characters or even the “player” themselves, as the “player” is actually given a real role in the narrative, helping to manipulate the environment for “Klaus” by using the touch pad on the Dual Shock 4 controller.

Moving on from presentation, it’s difficult to talk about the game without spoiling too much, but eventually the protagonist meets another playable character that goes by the name of K1. “Klaus” is the brains of the two, having abilities like hacking computer terminals and double jumping, whereas K1 is the brawn, having melee attacks like uppercuts and ground slams and the ability to glide. Players can take control of both players simultaneously or individually, allowing a level of control that works best for them. 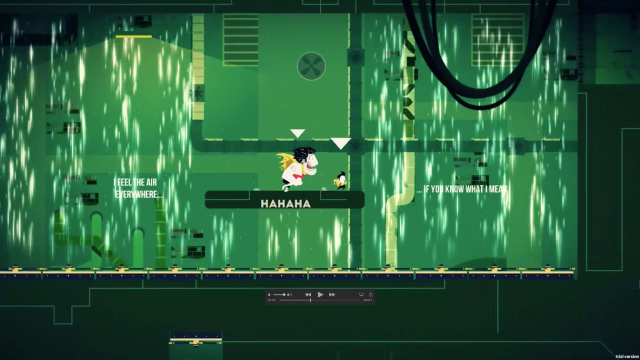 Each floor of the building has a specific theme, and usually new elements of gameplay revolve around such themes. For example, the Electric floor introduces walls that give off a static energy, allowing for both characters to wall jump. The Ducts floor introduces fans that allow characters to float or essentially “fly” to various platforms. Not only do the floors introduce new features, but even the levels within them, or chapters as they call them, as they offer new methods in the level design with each passing stage. The Glitch world, while not exactly a floor, is a personal favorite as well, introducing truly out there ideas like moving exits and infinite loops. The pacing of the game truly is impressive as no chapter really drags on, and just before the game could overstay it’s welcome, it ends with a pretty worthwhile climax.

One thing to mention as well is that each chapter has a bonus stage on it, each floor holding six door pieces that unlock a memory segment for “Klaus”. Each memory segment reveals new information about the main character, touching upon the narrative more and even allowing for an alternate true ending once all memories are collected. The bonus stages themselves are rather inventive, themed off of various traits of the protagonist like being left-handed or being a hard worker. Even when all the memories on a floor are collected, the player actually plays through the memory like a stage, providing a sort of tour through the narrative. 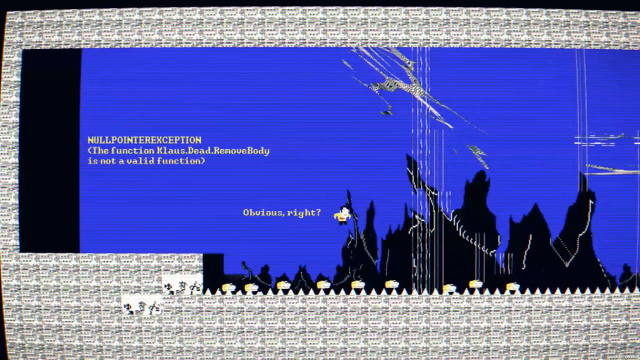 This isn’t to say that Klaus is a perfect game, as there are flaws that can irritate players. Sometimes a chapter begins with a weird zoomed in camera view of the protagonists, though this issue seemed to go away after some recent updates to the game. The only issue that seemed to remain would be the responsiveness of the controls, as some of the platforming can be a bit finicky. For example, a player could drop down with the run button held down and even if they fall straight using a wall to line them up, they might actually shift forward more when they land, as if there was momentum pushing them forward but there shouldn’t have been in the first place. It’s a minor issue but something that is still noticeable.

Klaus is a game that does well not to take too much time in a player’s hands. It has a fantastic difficulty curve and really creative ideas that truly make it a unique platforming experience. While it might take a bit for the story to truly engage the player, it’s well worth unlocking the true ending. Even just unlocking the various memories and revealing tidbits about certain characters can prove to be truly emotional. It just goes to show that La Cosa Studios’ debut title is a true experience that one must take in from start to finish.