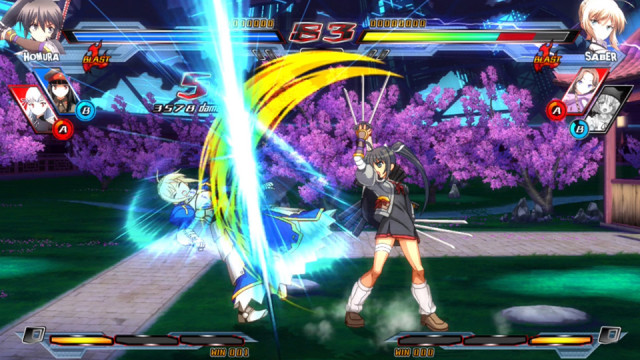 Authors Note: For a second opinion on the game, feel free to check Charlie Grammer’s review!

It isn’t easy to make a fighting game in this day and age, especially with heavy hitting franchises taking a lot of the spotlight from games that truly deserve a bit of attention. Despite this, many developers still release them, and it might not be easy to spot the good ones. Developer Examu has quite a bit of experience with the Arcana Heart series, so when it came to making Nitro+ Blasterz: Heroines Infinite Duel, a sequel to Nitro+ Royale: Heroines Duel, they seemed more than up to the task.

Taking anime characters from visual novels and various video games that often had some involvement from the company Nitro+, this crossover fighter takes a roster of a dozen female fighters (not counting the downloadable characters), plus twenty assist characters, and engages players in intense combat. The game bears a lot of good qualities seen in other fighting games, but it would probably be easiest to compare it to both Marvel vs Capcom and Blazblue. in terms of pace and other traits. 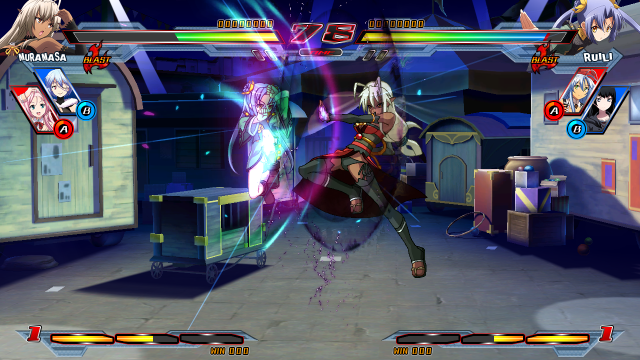 The game has two stories, one that is more traditional for fighting games, and another one that takes on more of a narrative approach. The traditional story has the player select a character as they fight through seven matches until they reach the eighth and final fight, facing off against a boss that feels very overpowered and unfair at first, but more manageable as the player improves their skills. Even so, there are a few things the boss did that even made this reviewer question how those moves were possible. Each character has a fairly similar story, being taken from their world and placed into a battle against mind-controlled opponents in fully Japanese voiced scenarios, of course with subtitles. The story doesn’t vary much, and even the Nitro+ mascot Super Sonico, acting as a sort of hostess, has essentially the same exact dialogue no matter the character going through the story. The only time it changes is when Super Sonico herself (or Ouka) is selected as a playable character, and even then, there was an odd part of dialogue towards the end where she got a phone call from herself.

Finishing the more traditional story mode unlocks “Another Story”, which instead opts to tell a completely different story that feels a lot like a visual novel. This story takes on a slight twist with the characters, making them play various roles in the same world (oddly enough in a town called Arkham City), which admittedly feels out of place at first, but then the game reveals the purpose when it gets closer to the end. Each chapter has a character pre-selected, involving all the various characters in a bit of dialogue as they attempt to figure out a series of mysterious deaths. During each chapter, there eventually comes an opportunity to fight, and thus a battle begins. Each chapter only has one to two fights and it goes by pretty quickly, so the bulk of this mode is the dialogue. The story feels a little nonsensical until the end, with a surprising twist, though it is a little disappointing that finishing these stories doesn’t unlock more than just some trophies or gallery art. 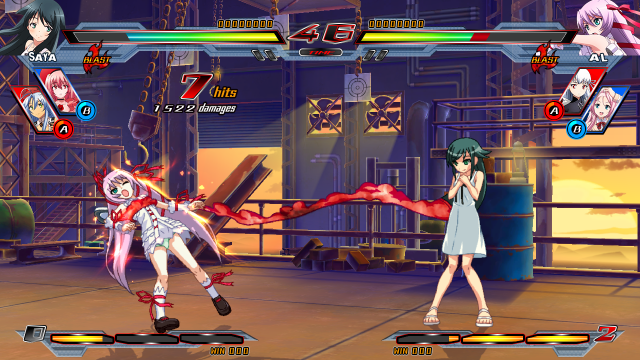 Getting to the actual characters, each of the twelve fighters feel incredibly unique to one another. The inhuman girl from Saya no Uta, Saya, plays a lot like Dhalsim of Street Fighter fame, with slow movement but long reach in her attacks. In contrast, Ruili, from Kikokugai The Cyber Slayer, fights with close range in mind, and has various combos that take a bit of skill to be able to pull off. Ein of Phantom: Phantom of the Inferno, feels a bit like Deadpool in Marvel vs Capcom 3 with the use of her long range gun attacks and close range knife moves, but she also has an incredible dash speed. It’s great to see that the characters don’t really go through the typical tropes of having similar clone characters. Even one character that looks like the final boss has an almost completely different move set.

Combat is fairly deep and engaging, as each character will have access to a weak, medium and strong attack, a heavy action, an escape action, an “Infinite Blast” button, and two partner buttons. Using the heavy action allows for a charged attack that can break through an opponents block, making it possible to get an opening for a one gauge super move, a two gauge “Variable Rush”, or a three gauge “Lethal Blaze”, which is essentially the character’s ultimate attack, with fully animated cutscenes to boot. One character in particular had an interesting Lethal Blaze, and that was Super Sonico herself, as her somewhat suggestive “Cover Girl’s Photogenic” attack actually does no damage, but makes it so that the opponent cannot block for a set amount of time. There was nothing in the manual that mentioned this and it was almost like a secret, but having asked the team at XSEED, the answer was uncovered prior to this review. The Infinite Blast is somewhat of a power boost that knocks back the opponent and regenerates both health and the special gauge. 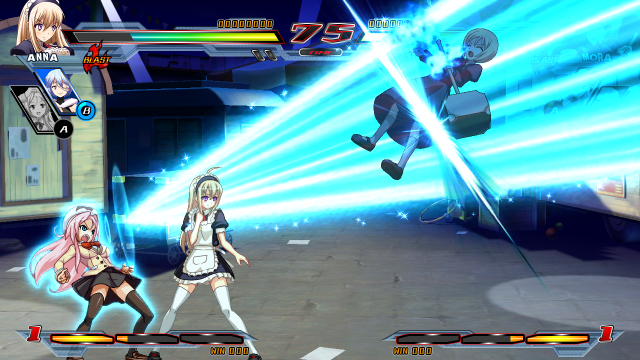 Much like Marvel vs Capcom, players are given a set of assist characters to select from, being able to pick two of again a diverse cast with unique attacks and abilities. These characters typically only appear temporarily, usually performing an attack like a satellite beam, or summoning a swarm of locusts. One character of note is again the mascot Sonico, who appears with her band First Astronomical Velocity. Unlike other assists, they actually stay in the battle the whole time playing their song, and also providing power-ups for both the characters on screen, whether improving strength, recovering health, or improving defense. It’s these sort of things that really make the game unique and have an unusual charm about it.

Unfortunately, the online network mode wasn’t able to be tested for this review outside of looking at the various options, which seemed pretty standard fare. It’s a plus that the PS4 and PS3 versions of the game have cross-play support and allow for both online communities to play together. Ranked matches, casual player matches, friend matches, and then a replay theater show that the mode at least has the essentials, though it is currently unknown just how many people will be playing this online. Despite this, the game does seem to be fully featured and even offers an incentive for picking it up early. As mentioned before, there are actually two downloadable characters, Heart from Arcana Heart and Homura from Senran Kagura. Unfortunately, since the game was technically not live at the time of this review, these characters could not be tested out at this time, though the characters will be available for free starting today, and will continue to be free until February 29th. On March 1st, they will both be available for $5.99 each or in a bundle for $9.99. 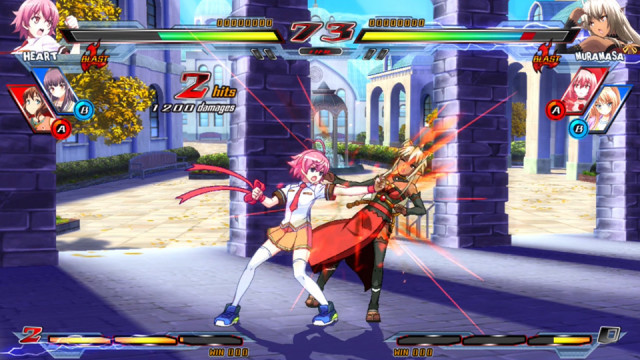 Though most people would probably ignore the story, Nitro+ Blasterz has a lot going for it, with beautiful sprite animation, deep combat and a fairly strong presentation, it’s a fun ride for anyone that decides to pick it up. With smooth and easy to pick up controls, a diverse move set among the roster, and fast-paced action, it would be awesome to see this in a tournament scene. It’s just unfortunate that the obscurity of many of the characters might not reach many casual consumers, meaning it might never make it to events like EVO. Nonetheless, the game is a true blast to play and hopefully it gets enough attention to get a bigger and better sequel.