At PlayStation Experience 2015, developer Ackk Studios demoed their new RPG, YIIK (pronounced Y2K). Inspired by cult-favorite JRPG Earthbound and the works of Japanese novelist Haruki Murakami, YIIK offers turn-based combat with WarioWare-like minigames for inputting commands. Taking place in the year 1999, the game utilizes the trends and stereotypes of the time period, but then goes off into an alternate reality, transporting players through a mind-bending journey.

Players take on the role of Alex Eggleston, as he returns home from college to take on a mystery that involves people met through the internet, parallel dimensions, and finding himself. After following a cat into an old building, he meets a mysterious woman that later shows up in footage on the fictional imageboard site omnism1999.com,  where that same woman suddenly disappears. Meeting up with other users of the website, they embark on a journey to find out what exactly happened in the video. 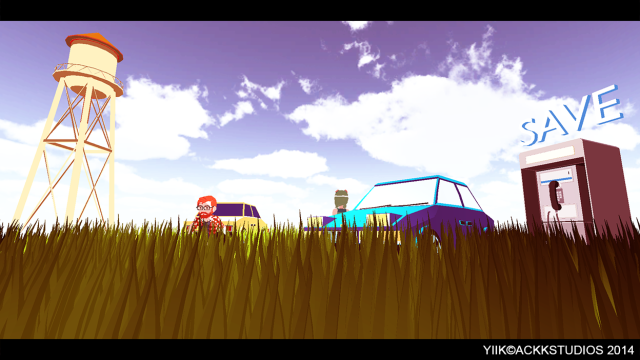 Using a flat-shaded style, the game has a unique look compared to other games, especially of this genre. With a dark tone to the narrative and suggestive situations, the game does an interesting job of engaging the player into the story. The music to the game is also interesting and feels very similar to Earthbound, using off-beat tempos and interesting sound effects. To get something straight, this game feels very much like an independent game, which is perfectly fine, because that’s exactly what it is.

One can see YIIK obtaining cult status just like the games and stories that inspire it, but the presentation definitely feels different. Cutscenes use static art with text displayed beneath, yet are fully voiced. The artwork used clashes with the rest of the game and even shows a few errors like mirroring (where text reads backwards). All the voices are performed by various internet stars, animators, and voice actors that are just starting their careers, with some performances better than others. Though attributed to the style, animation is pretty minimal, as many animate objects and characters move in low-frame animations, though it seems intentional. Again, these aren’t exactly considered as flaws but merely a way to see this game stand out among the crowd, blending well with the unusual scenarios and art styles.

Combat in YIIK is very interesting, as many of the combat scenarios are prompted by talking to random townsfolk (at least in this demo). They will often have an interesting story to give them an excuse to challenge you, like assuming Alex was sent by a domestic violence victim, or just because they don’t like strangers snooping around. Commands are unique between different characters, with each character using various everyday items as weapons, from vinyl LPs to keytars.

Each battle command is tied to an individual mini-game: for example, using one of Alex’s vinyl attacks starts a game where the player has to hit a button in certain sweet spots as they watch a record spin on a turntable. Hitting each sweet spot successfully keeps the record spinning and adds bonus damage, while missing stops the record early. Another minigame involved using a camera to take a “bad shot”, which apparently, the worse the composition of the shot, the more damage would be dealt to the enemy. Like a Mario & Luigi game, enemies will attack and players are given a chance to defend by pressing a button at the right time. During the demo, each enemy attack pattern was the same, which felt a little disappointing, but it was said that the developers were looking into adding more variety to it. 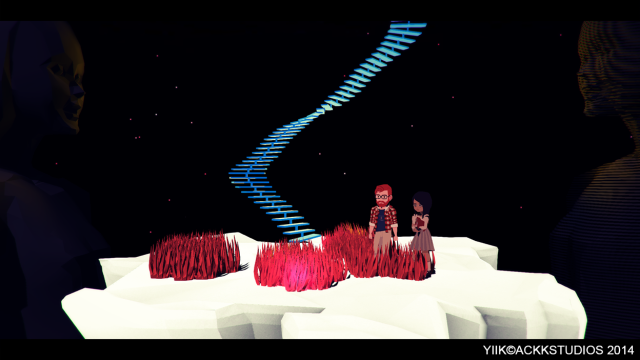 The interface of the combat was interesting during the demo at PSX than what is currently shown in assets, so it seems that there have been some tweaks made. Despite the low-budget feel, the game still seems to have an interesting story to offer and more zany situations to explore, including unique weapons, parties of eight characters, intricate puzzles, and more. YIIK is currently slated for release next month, releasing for PlayStation 4, PlayStation Vita, Wii U, PC, Mac, and Linux.