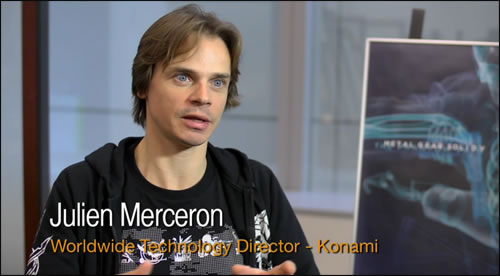 BANDAI NAMCO Studios Incorporated, the leading development division of the BANDAI NAMCO Group, today revealed that Julien Merceron will be joining the company in December, 2015 as Worldwide Technology Director.

Renowned as a world-class engineer in the video games industry, Merceron has previously worked for many major game companies in varying key roes of development, and also currently serves as a board member for the Game Developers Conference and CDEC.

Hajime Nakatani, CEO of BANDAI NAMCO, stated, “I am very happy to welcome Mr. Merceron as part of BANDAI NAMCO Studios. The studio will continue to accelerate its efforts worldwide. In line with the evolution of information-communication technology, innovative services through VR/AR/IoT are being created, and we are facing a chance to create a lifestyle and entertainment that has never been imagined. In such revolutionary times, in order to create the best product for the world, we would like to evolve the studio together with Mr. Merceron. Please look forward to the future of BANDAI NAMCO Studios.”

“I’m extremely excited to be given an opportunity to make a difference within the amazing BANDAI NAMCO Group,” Merceron said, “so well-known for its iconic IPs! I’m looking forward to empower the teams I’ll be working with and accelerate growth, innovation and creativity. The reach of this group goes well beyond games, it is a true Multimedia and Entertainment Group, so I know I will learn a lot too! Working with so many experienced people and friends and focusing on a wider range of entertainment forms is the chance of a lifetime! Within BANDAI NAMCO Studios, there is a true opportunity to have a worldwide reach with Original Content.”

Finally, courtesy of the official press release, here’s a career summary, for those unfamiliar with Mr. Merceron:

Merceron began his career as a programmer for the Atari Jaguar in the early 90s. He joined Ubisoft Entertainment in 1999 where he worked on numerous teams before his promotion as the company’s Worldwide Technical Director. Merceron was a key member who drove the success of several famous triple-A brands.

In 2013, Merceron joined Konami as their Worldwide Technology Director.

In 2016, Merceron joins BANDAI NAMCO Studios to bring further innovation to the world.