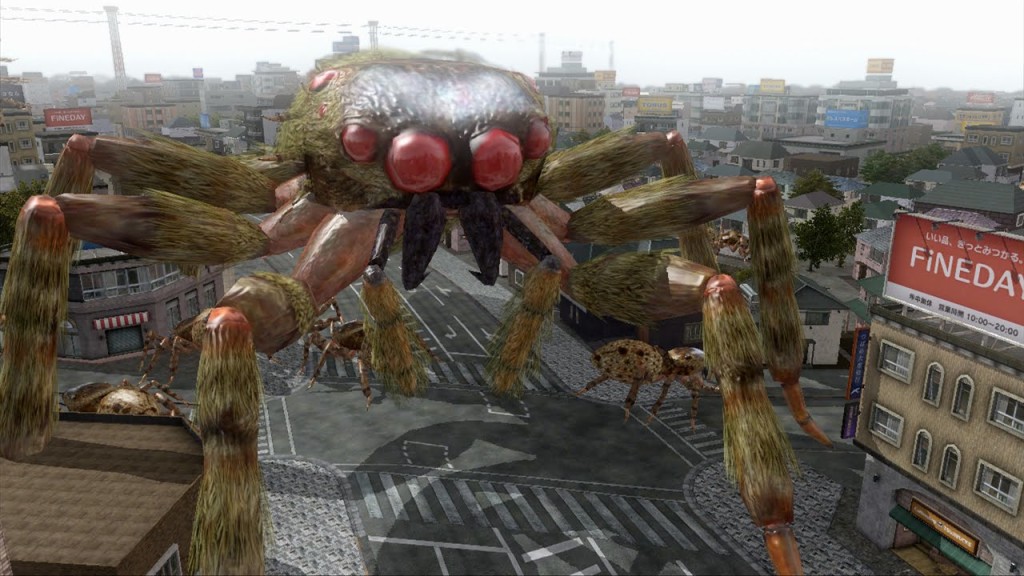 Things seem to be looking up, and it appears man can lay their fears to rest. Soon, however, a new wave of these giant insects attack, and it’s revealed that they haven’t been driven to extinction, but rather have simply been dwelling underground, evolving and becoming even stronger.

Earth Defense Force 4.1 features four different classes, each with different weapons and abilities. You will choose what class you want to use, as well as the weapons to take into battle. First up we’ll examine the classes. 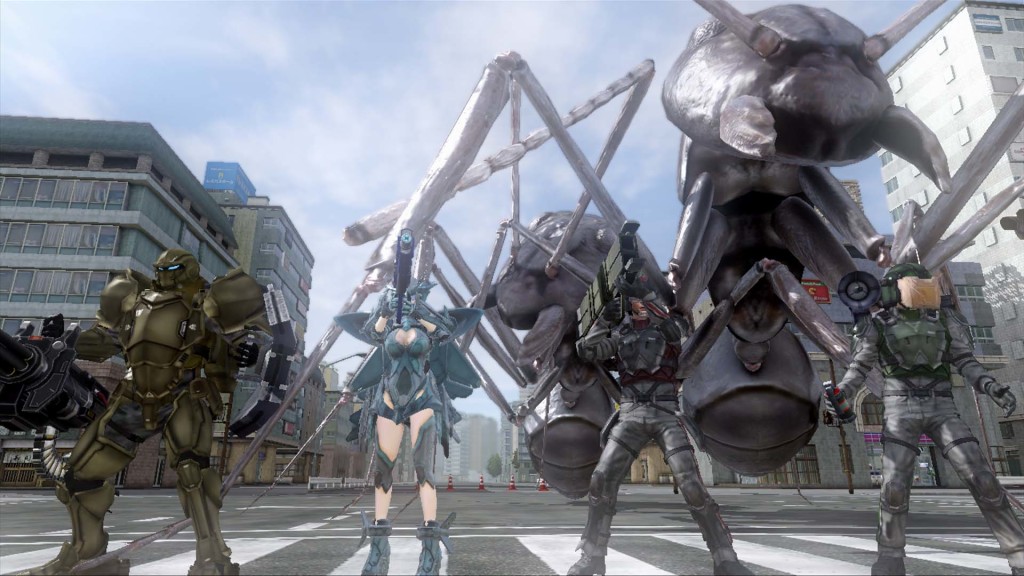 The first class is the most balanced, and likely the class many newcomers will stick to as they learn the game and get used to things. This is the Ranger, which has average statistics, but may actually have the best weapon variety. The Ranger can also utilize a quick roll to get out of the way of the enemy, then utilize a variety of weapons, including missile launchers and assault rifles, to take out his foes.

The next class is, perhaps, a fan favorite. This class is the all female Wing Diver, which can fly through the battlefield. As you control this class, you’ll need to keep an eye on the energy gauge, as it not only determines whether you can fly, but also doubles as ammo for many of the Wing Diver’s weapons.

The third class can be quite difficult to utilize in single-player, as it is the game’s support class. This is none other than the Air Raider, which can call in air strikes, buff his teammates, manually target weak points on the enemy, and lay down shields to protect his allies. Because he specializes in support, he cannot do anywhere near the damage that the other classes can.

Finally we have the walking, dual-wielding tank, also known as the Fencer. This guy can utilize more heavy weaponry, such as miniguns, and even a shield that can deflect incoming damage. The main downside to this beefy class is the speed, as he moves extremely slowly, thanks to the heavy armor and weapons he utilizes. 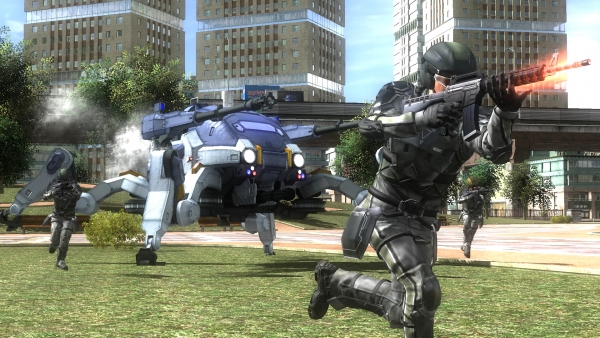 Your experience in the game will be determined largely by the class you choose and how well (or poorly) the random number generator blesses you as you are able to acquire new weapons. Another factor is whether you are playing solo or with a friend, either in split-screen or online co-op.

In the stages, the missions are fairly similar. You will need to destroy hordes of insects and other creatures as you attempt to move through massive, open stages. You will be required to kill everything, or simply stay alive, which sounds like it can become boring quite quickly, but it throws in enough of a variety thanks to the classes and enemies to keep it from becoming too stale.

The first mission, for example, has you battling hordes of giant ants. These ants aren’t too threatening (unless, of course, you attempt to dive right into the hardest difficulty the way I did, in which case you better hope that you have great reflexes, or they can one-shot you), and you can wipe them out fairly easily. Soon more enemies will be introduced, including spiders, bees, bipedal robots, dragons, and spaceships, all of which have different colors and forms.

The game’s pacing through the 89 solo levels (98 online) is quite good, and the variety helps ensure that players shouldn’t become bored. 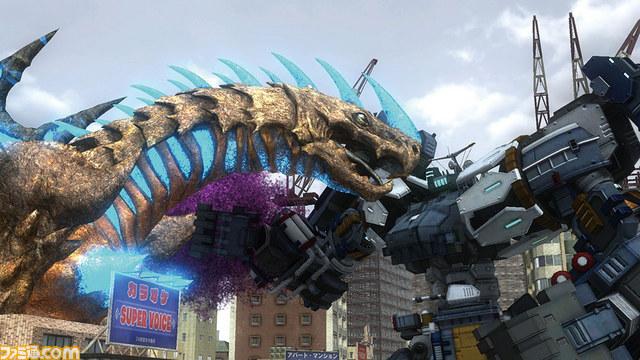 There are new foes, as well, such as a new kaiju enemy known as Erginus that spans multiple levels. As you attempt to battle this monster, your superiors eventually figure out that your normal bullets and missiles have no effect on it whatsoever, and decide to send in a slow-moving “walking fortress” mech, which you will pilot and proceed to fight the beast with.  More of these creatures will appear later in the game, and so you will have multiple chances to pilot this mech if you enjoy the segment. 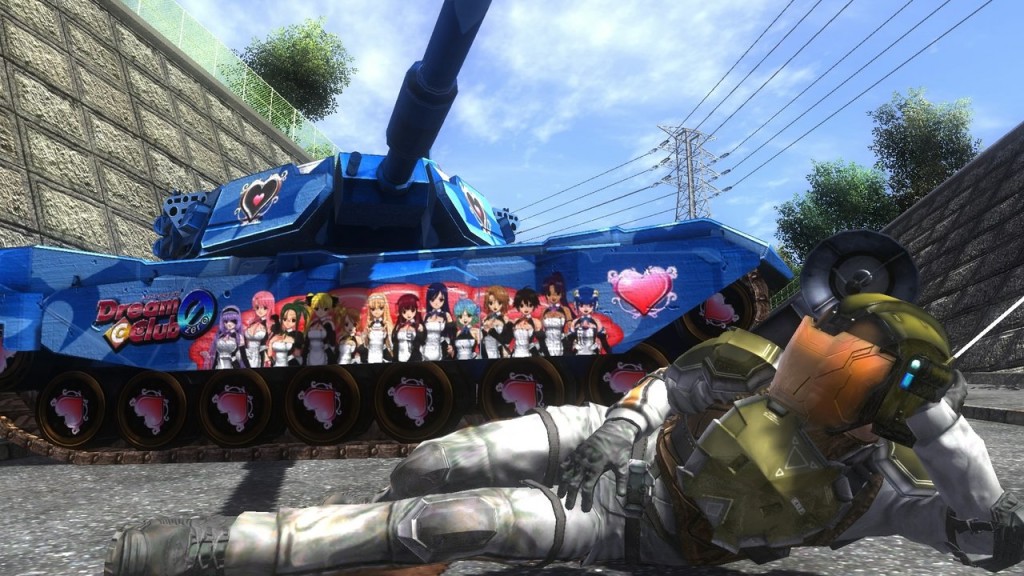 There are also tunnels and other vehicle segments. Many disliked each in previous Earth Defense Force games, but now they have both been improved. New lighting, including the fact that soldiers have lights on their weapons as they explore the tunnels, help make these areas actually feel like they are underground, and makes the atmosphere feel much more appropriate. It can be annoying while battling in these areas once insect bodies start piling up, however, and blocking your shots, but it’s to be expected in such a cramped area. Fans may also be happy to hear that the sheer majority of the game is set above ground.

Vehicles now also feature a laser sight, which makes it much easier to see where you’re aiming when compared to previous titles. The handling also feels like it may have been improved.

Visually, Earth Defense Force 4.1 is perhaps the best-looking and best-running title in the series, although it wouldn’t be fair to say it looks or runs perfectly when compared to the more modern games. 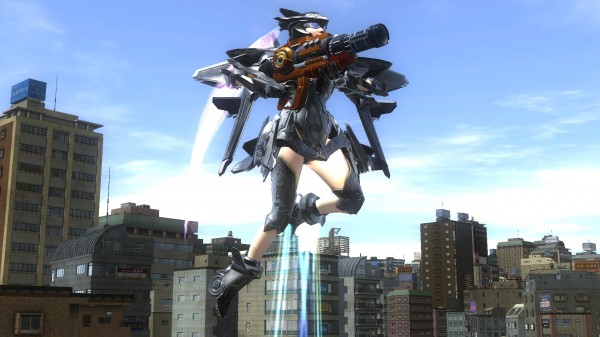 One of the features the developers bragged about was “Constant smooth 60 frames per second”. This isn’t always true, unfortunately, and dips are somewhat common as skyscrapers begin to crumble or too many Ravagers pile up near you. That said, this drop isn’t nearly dramatic enough to be bothersome for the most part, but there are occasions when it may become a choppy mess.

The load times are extremely quick, often loading before the player has a chance to read the tips and tricks shown on the loading screen, and, since the game is built around you returning to levels repeatedly to earn more armor and weapons, this is definitely a huge plus.

When all’s said and done, Earth Defense Force 4.1 delivers exactly what it aims to; Mindless fun as you take on hordes of insects. Some may dislike the fact that this is all the game ends up with, and others would prefer a progression system more respectful of their time, but when it comes down to it, Earth Defense Force 4.1 should appeal to anybody looking for a relaxing game in which to destroy countless hordes of enemies.