VBlank Entertainment was excited to show off their follow-up to Retro City Rampage at PlayStation Experience this past weekend, giving fans a chance to try Shakedown Hawaii for the first time. They gave GotGame a special invite to give the arcade mode a shot, as the game is still in development and the campaign wasn’t playable. The arcade mode is basically like the free roaming mode in the previous game, which had characters from other franchises to play, so it’s possible that something like that will happen again with this title. 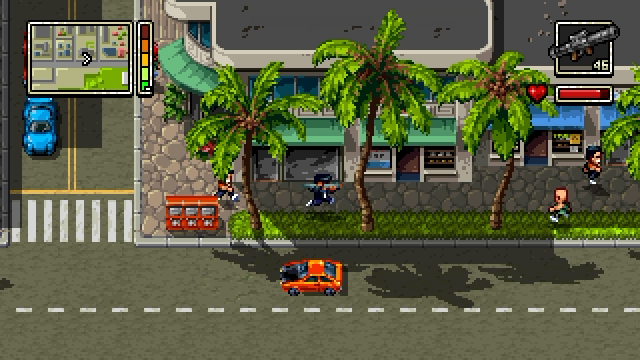 Taking place roughly 30 years after Retro City Rampage, the title isn’t considered a “sequel” but it is very much a successor to the previous game. Now taking place in a 16-bit version of Hawaii, “The Player” from the original title is back, coming out of retirement to go on a new rampage. The story is still in the works but fans can still expect a retro styled open world, with plenty of weapons, plenty of pop culture references, and lots of explosive mayhem.

The arcade mode essentially offers up an endless mode where the player is tasked with reaching new high scores. Points can be gained by destroying environments, killing NPCs or enemies, and even by running a cab service and driving people from point A to point B. All of these actions can be chained together to get better score bonuses and give an overall better score. Players will have several weapons available to them, examples including pistols, grenades, or even rocket launchers. All of these weapons have great pixelated animations and perform quite a bit of damage, and there are plenty more planned for the final release.

The game has a lot of similarities to the Grand Theft Auto series, using it as inspiration. Players can steal cars at any given moment and drive around, and they’ll also be building a meter that works similarly to the star system in GTA for when they cause damage or kill civilians. Every once in a while, defeating a police officer will make them drop a badge that makes the player invisible to them for about five seconds. It’s an interesting spin to give the player a chance to lay low, which could be difficult to do as it’s rather hard to not commit any crime in the game once the rampage starts.

During the demo, VBlank CEO and developer Brian Provinciano was on hand to give tips and tricks, even revealing that a variation on the infamous Konami code was available in the demo to unlock all weapons. Despite the code being available, many of the weapons unlocked were placeholders, so it wouldn’t be worth mentioning them now, as many of them had no effect. The game has three zoom options as well, as having the camera zoomed out as far as possible gives a good layout of the area, while zooming in close gives an up-close look to the carnage unfolding. 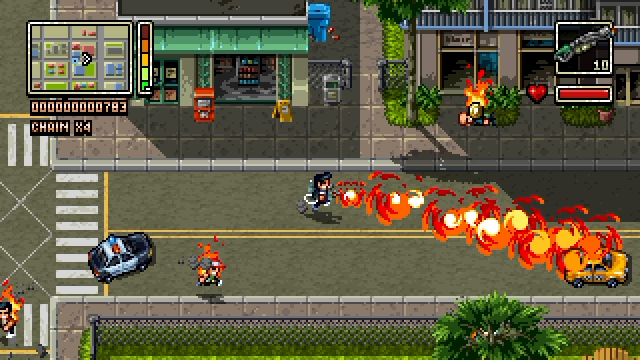 The game does make a few advances over the previous title aside from graphical changes, as now players can actually walk behind buildings, seeing the silhouette of the player. New physics seem to be applied as well, as many objects react when pushed by the player, like chairs, tables, etc. It seems to be an overall better presentation and seems like a more detailed game overall. Shakedown Hawaii is scheduled to release sometime next year for PlayStation 4, PlayStation Vita, Steam, and Nintendo 3DS, with other potential platforms to be determined.