Very rarely does a game really surprise me, but Witch Beam’s Assault Android Cactus has given me a new studio to watch. Having released on PC earlier this year, the title has already received positive reception, and now it’s coming to the PlayStation 4. Fans that attended PlayStation Experience this year were treated to a fantastic top-down twin-stick shooter starring adorable android characters. Despite the fact that Witch Beam is an independent developer, the presentation to their game is astounding, packed with tons of content and features, tight gameplay, and an incredible amount of charm.

The story starts with the heroine, Cactus, an android that works as a space police officer, receiving a distress signal from a nearby space freighter. She’s awkward, clumsy, and incredibly reckless, but she has a heart of gold and the confidence it takes to save the day. Within moments of the beginning, there are already four playable characters as players are introduced to Holly, Coral, and Lemon. Each character has a different primary and secondary weapon, and unlike many other games, these characters all feel unique. Not only are there the initial four characters, but as players continue with the game, they’ll unlock more characters, each just as unique as the last. 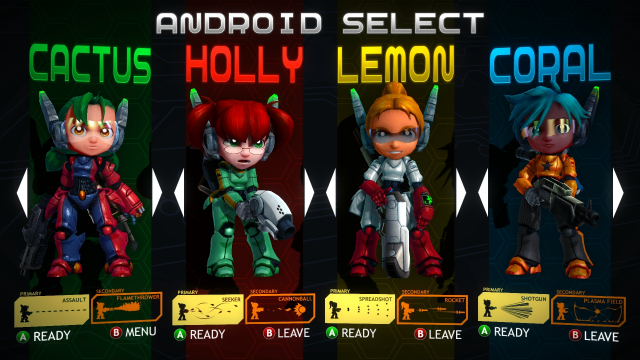 During my demo, Witch Beam “Design Guy” Sanatana Mishra guided me through some of the levels, as each one is a sort of arena type with different designs. One such level was able to completely morph based on the player’s actions, changing enemy placement and obstacle locations on the fly, which looked really impressive. The difficulty feels fairly balanced, yet the game doesn’t hold your hand either, hitting that difficulty sweet spot for a bullet hell shooter like this.

During gameplay, players will move with the left analog stick while the right analog stick will aim. The R2 or right trigger button will shoot while the L2 or left trigger will switch weapons, which also grants a few frames of invincibility. Players will destroy dozens of enemies, creating a combo chain as they dodge color-coded enemy fire and pick up power-ups that activate additional drone shots, wings for additional maneuverability, and battery charges, which are needed to refuel a draining battery meter that ends the level when depleted. As previously stated, each character has a different weapon set and play style. Cactus combines assault rife shots with flamethrower bursts while a character like Holly has tiny guided missiles working with a large cannonball shot. Since each character has different weapons, this makes for different strategies during certain situations. 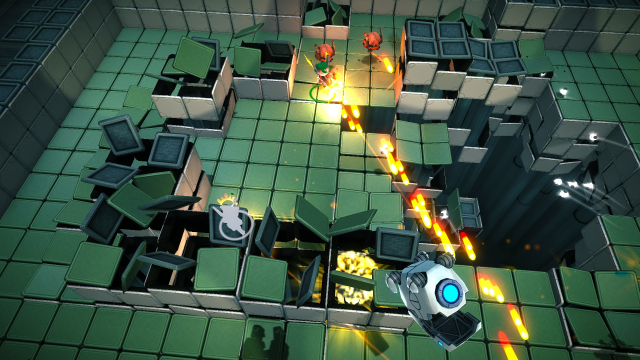 Taking on an early boss battle as Coral, she entered the fray with a shotgun and a plasma field. Unfortunately, the boss I fought was a bit tricky to get up close to unless you find the safe zone in-between their bullets, and I had to make effective use of the plasma field drops to deal heavy damage. Playing as an unlockable character like Starch however would give a focused laser that deals damage over a continuous stream of firing, which works great from a distance, making that same boss a bit different to fight against. Not only do the characters all feel unique, but the game overall just feels great to play, giving appropriate feedback for taking damage and even dealing damage, as well as giving a smooth 60fps for keeping up with the action on screen.

One of the great things about the title is that it has a local co-op, allowing players to take up to three friends in the fray to fight with them, giving each player a unique character to contribute to the fight. This is a great feature to have as the current generation of consoles tend to focus on online multiplayer only (which this title lacks, though it’s forgivable considering that an online multiplayer option for this title would probably take a toll on performance). It’s a nice treat for friends that just want to destroy things together in a challenging yet fun title. 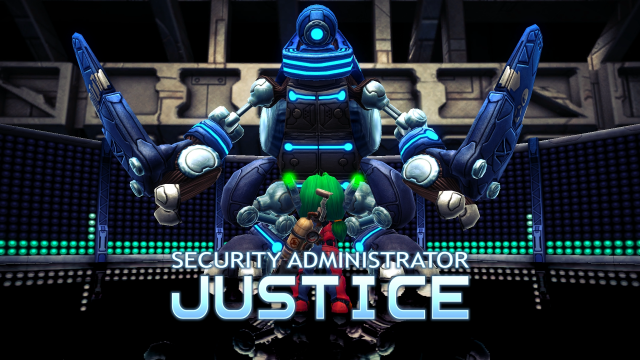 Going back to the amount of content in the game, it feels very much like some of the gems of early gaming with a selection of modifiers that alter the game, similar to cheat codes. While some of these modifiers can be cosmetic like “Normal-Sized Head” mode, which makes the chibi-styled characters have more realistic proportions, some of them can alter the game entirely, like “First-Person” mode, where the entire game can be played in a first-person perspective. There’s even unlockable 3D models and concept art for a gallery, giving some extra bits of info about the characters and enemies in the game. It’s a feature that doesn’t show up all that often anymore, so it’s much appreciated to see such a nice touch to the presentation.

Some would say the graphics of the game are a little dated, and though it doesn’t take a realistic approach with top of the line graphics, the style of the game is fun and easy on the eyes. It’s colorful but not overly busy, and makes great use of the previously mentioned color-coded shots. Assault Android Cactus easily stood out among the games at PlayStation Experience, providing a great amount of entertainment and an impressive amount of variety in the content, and it sounds like it will make a great title for fans of the genre. Assault Android Cactus is expected sometime early next year for both PlayStation 4 and Wii U, as well as a handheld version on the PlayStation Vita, and the game is currently available on Steam..