Don’t Tread Water On Me 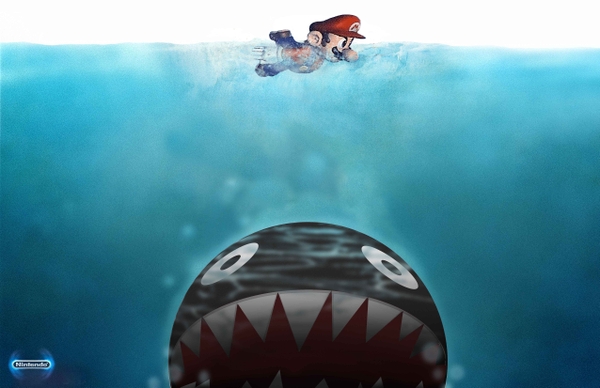 I was reading up on the new Tomb Raider on wikipedia the other night, and one of the things I read was this statement:

Lara can swim which will add to Lara’s mobility and combat tactics.

Having just finally 100% the first one, I realized that while she CAN go into the water in the first game, it’s minimal at best, and that in turn made me ask myself…Who was it that arbitrarily decided that we can’t swim in the first video game of a series? Do the swimming mechanics just simply not exist when they build the first game, or do they hold off on that until they make a sequel so they have something “new” to entice players to play the sequel and not call it simply a ‘rehashing of the first game’, as if swimming is something so fucking novel. What exactly is the reasoning behind it? I’d like to know. The first Assassins Creed? Can’t swim. And it’s that way for hundreds or more video games. Swimming is not something that super exciting to do to begin with, no offense to professional swimmers. I learned to swim as a child, I hated doing it and I haven’t done it since. So what exactly is the reason?

And in the case of Tomb Raider and Assassins Creed, where they can perform these amazing feats of strength, scale entire mountains and buildings with ease, and fight hordes upon hordes of bad guys with very skilled combat tactics…am I supposed to believe the one thing they lack in is swimming skills? Lara Croft can scale a mountain while skinning a goat and giving birth, but keep her out of the water because that’s her weakness. That she can’t handle. Master Chief can destroy an entire alien race, fall from space and land safely on earth and help defend the entire human race…but god forbid the giant super soldier gets anywhere near a body of water. It’s his kryptonite. Then there’s the hypocrisy, in that while you can’t swim in 99% of video games, there’s an entire fucking game dedicated to the sport! 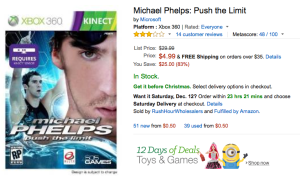 That’s right. Michael Phelp has his name slathered all over a very obvious Kinect slutfest. So while you complain that you can’t swim in any other games, just thank the heavens that your prayers have finally been answered, and you can now swim nonstop in a whole game! It makes up for years of shoddy developing in my opinion.

There’s sports games, and then there’s Kinect sports games, and then there’s ‘I’m gonna stand in the center of my living room and wildly swing my arms in a windmill motion ’cause I’m into swimming in my house”. I also like it when developers don’t let you swim in the first game, but by the 3rd, you could win the Olympics. If you suddenly have these powers, where were they before? Did Spyro learn how to swim somewhere offscreen during the development cycle? Where did he obtain this magical swimming knowledge? Spyro, oh god, in the first game you just easily drown. You just flat out drown. In the second game however, you became an aquatic mastermind and can swim for long periods of time, and by the third? You can swim in sub-zero water. You go from not being able to swim at all, to being able to withstand literally freezing temperatures of water that would give even the best swimmers hypothermia. Where did Spyro learn these things? Am I to assume that he simply signed up for swim lessons on his off hours?

I don’t know, the whole thing strikes me as rather bizarre and stupid, but perhaps they’ll eventually make swimming in the first game a normal thing, I mean, it’d only make sense…honestly, water they wading for?